The early 1990s were a crazy time in gaming. Nintendo’s near-monopoly in the American market was being broken. Consoles were finally starting to make a dent in the computer-dominated European market. Both of these things were being accomplished by SEGA, and in both cases, a tremendous debt was owed to a blue hedgehog whose career has seen more ups and downs than John Travolta’s. As if we weren’t flooded in mascot platformers already due to Super Mario Bros., Sonic The Hedgehog (Free) unleashed a positive tidal wave of games featuring animals with attitudes hopping through levels. Even if they didn’t have any of SEGA’s hardware, people wanted something like Sonic, and a great many developers were all too happy to comply. This is the era that birthed Superfrog, an Amiga platformer from eventual Worms developer Team17. In yet another reflection of the era, Superfrog had a sponsorship deal with energy drink Lucozade, with the drink appearing all throughout the game as a power-up. 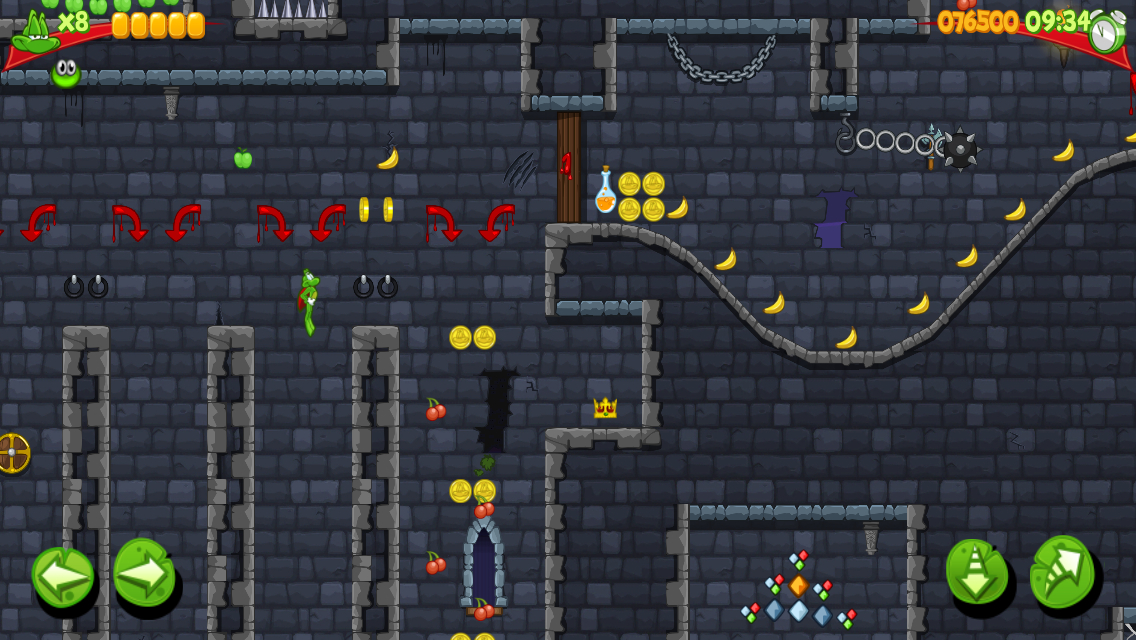 Superfrog was kind of lame, truth be told, much like most of the Sonic-wannabes of that era. He’s an anthromorphic frog with a red cape and a nearly-perpetual smug look on his face. He races through sprawling, confusing levels full of enough collectibles to give a Rare designer pause. Most of those items did nothing but add to your point total, as though points were relevant in the platforming genre anytime that decade. As mascot games went, Superfrog was like RC Cola or the Gobots. It was painfully obvious what it was trying to be, and just as obvious that it wasn’t as good. That said, if you were a Sonic-craving kid who had an Amiga and not a SEGA, even something half as good was still pretty darned good. As a result, Superfrog was pretty popular and earned itself ports to CD32 and PC, with the character making cameo appearances in a couple of Worms games over the years.

No surprise, then, that there are quite a few people nostalgic for the little guy. Heck, I’m sure there are people nostalgic for Bubsy the Bobcat out there. So it was, with very little fanfare, that Superfrog made his mighty return on PC and PSN in 2013, finally making his way to iOS this month in Superfrog HD ($1.99). He’s lost his corporate sponsorship, but his graphics are shinier than ever, and his near-perpetual smug look is now all the way perpetual. The level designs have been altered a bit, and the presentation a lot, but Superfrog is back, and he’s as mediocre as ever. As in the original, you play a prince-turned-frog on a quest to rescue his princess from an evil witch. You’ll hop and run through 24 levels grouped into six worlds, each with their own theme. At the end of each world, you’ll face off with the witch in increasingly tricky set-ups. 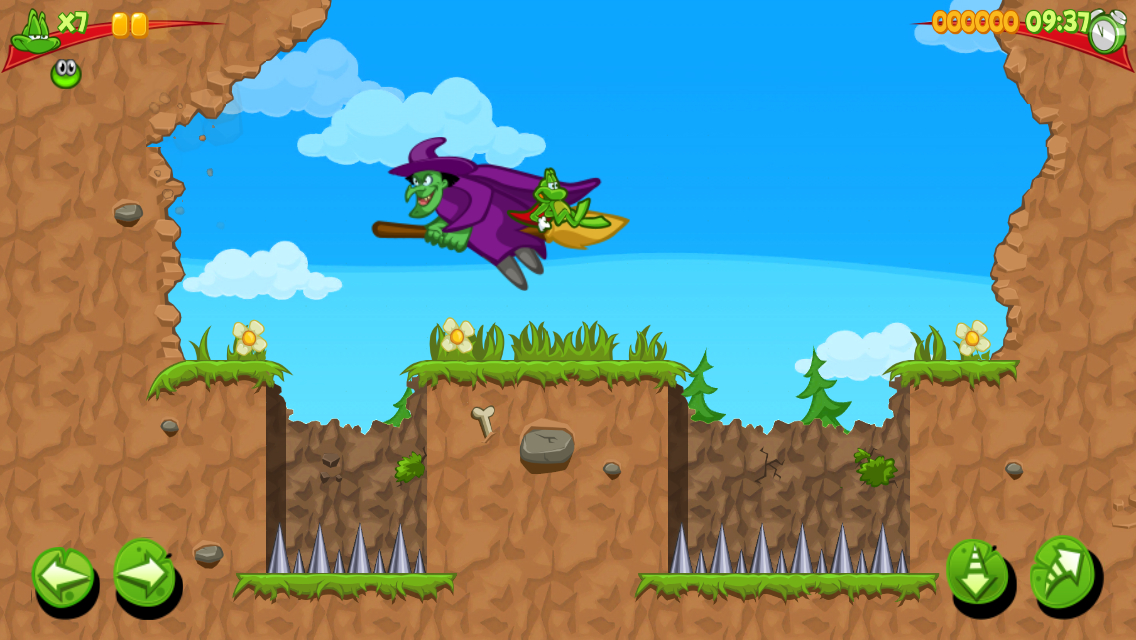 Superfrog has a few abilities at his disposal, once he’s collected the right power-ups. He’s quite the jumper, as you might expect, and he can also use his cape to float if you collect the wing power-up. He also has a little goggle-eyed green friend who, once collected, can be tossed in several directions at enemies. Other power-ups include a health potion and an invisibility potion. Aside from these items, you’ll also find point items in each level. A lot of point items. Coins, crowns, jewels, bananas, melons, apples, and more. The game keeps track of how many coins you’ve collected from the level, but the other stuff is pure point-fluff. The game is controlled via the world’s tiniest virtual buttons which oddly work fairly well in spite of clearly being created for ants.

One thing I will give the original Superfrog credit for is the number of secrets packed into each level, and that hasn’t changed with this remake. The stages, as mentioned, are huge and it’s somewhat unclear at times which path is the correct one. One thing you can be sure of is that you’re never far from a wall you can nudge against to open a secret passage, usually ending in a room full of point items. The game keeps track of how many of these secrets you find and includes it in the tally at the end of each level. It’s pretty fun trying to sniff out all of the passages. The inclusion of a time limit means you can’t fool around too long on any given level, and you’ll want to be especially careful about it in later levels where a poorly selected path can lead to having to backtrack to a missed switch, but you generally have enough time to explore around a fair bit. 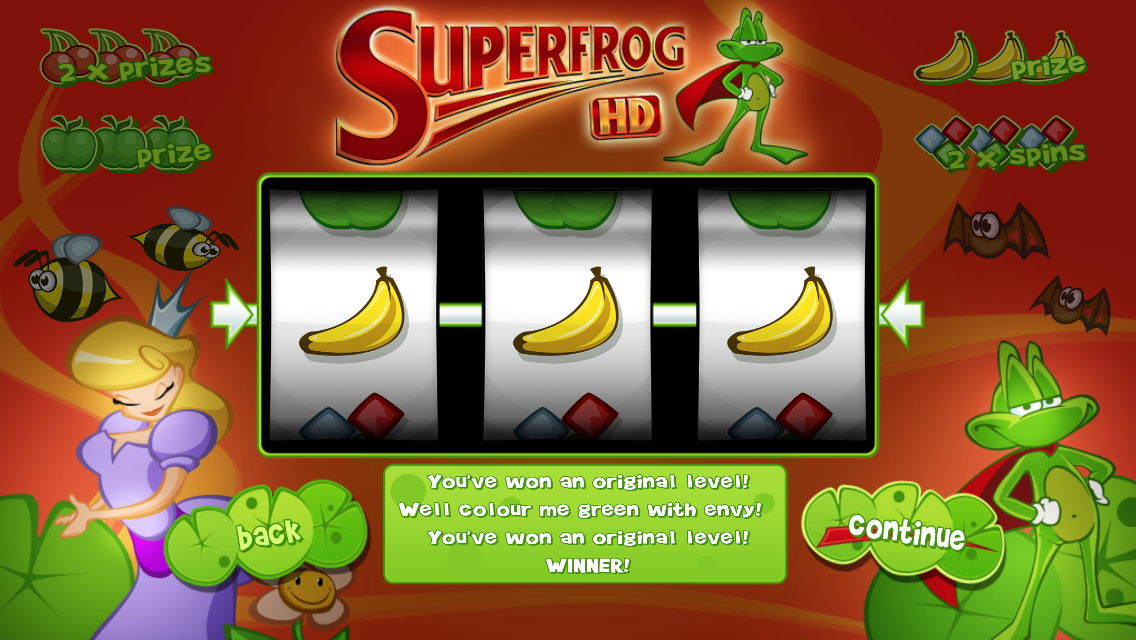 Apart from being big and full of stuff, the level designs in this game are fairly unremarkable. Past a certain point, the game almost relishes throwing you into fatal situations with little or no warning, so you’ll have to hope your auto-checkpoint wasn’t too far back and try to remember the trap for the next way through. That said, the game is pretty generous with extra lives and never becomes monstrously difficult. It keeps you jumping and moving all throughout, which is something a platform game absolutely needs to do. If you want something with a little more bite to it, you can unlock the original Superfrog’s level layouts in a slot machine bonus game between levels. They’re almost the same as the regular levels, but little changes here and there add up to a more difficult experience.

There’s also an endless runner mode tacked on if you feel like giving it a go. It’s not auto-run, but you have to keep moving because your timer only has a handful of seconds to spare. You need to constantly grab clock items to add a few seconds to it and keep your game going. Like most endless runners, the stage is somewhat randomly mixed together from various parts, but there are too few parts for the game to choose from, so you’ll end up running into the same situations several times in a row at times. As a bonus mode, it’s hard to complain, especially given the size of the main game, but it gets old very quickly and just isn’t as fun as the regular game. 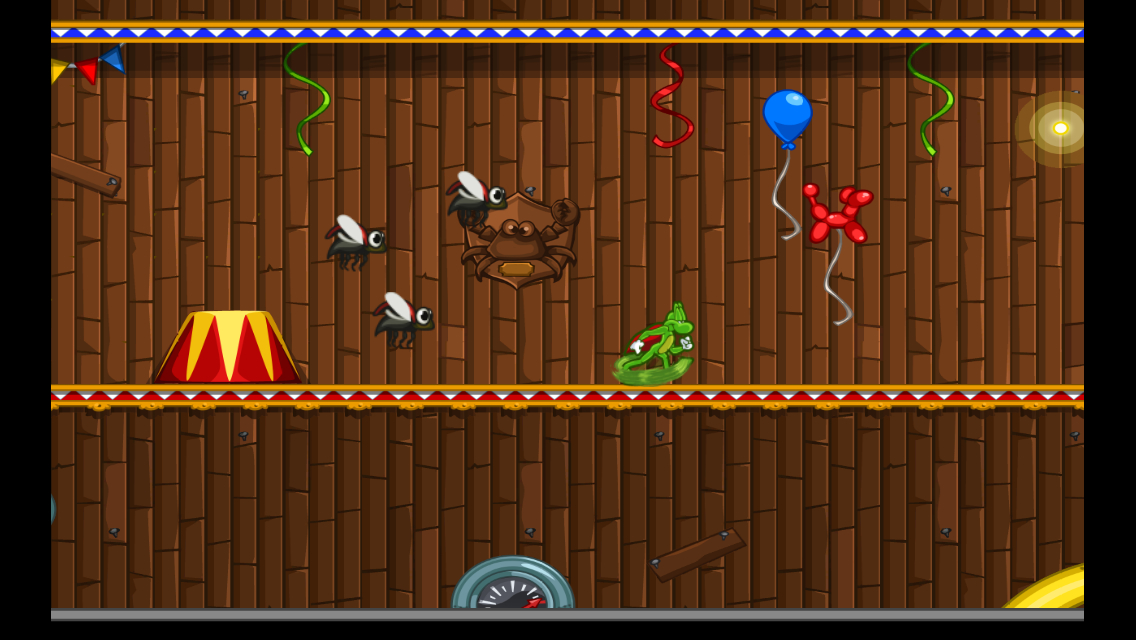 Aside from the scattershot level design, my other main complaint with Superfrog HD is the collision detection. Superfrog sometimes takes hits from things he’s not actually touching, which in the case of spikes is instantly fatal. The enemies also do a poor job of communicating their weaknesses. For example, you can jump on a bee just fine without taking damage, but try to jump on a completely flat falcon and you get hurt. You never really learn what can hurt you until you try jumping on it, so you’re better off just avoiding enemies or throwing the ball at them. Speaking of that ball, getting it to fire in the direction you want it to is sometimes tricky. The game doesn’t explain it, but I think you’re supposed to tap in the direction on-screen where you want it to go. Usually it goes where you want it to, but sometimes it doesn’t, and that error usually costs you at least a little life.

In terms of pure presentation, Superfrog HD is gorgeous. The levels are full of vivid colors and detail, Superfrog himself is nicely animated, and the backdrops are varied. On the other hand, enemies blend into the backgrounds far too easily. Along with the issue about enemy design I mentioned before, it’s clear that the game was designed to look beautiful, above concerns like communicating vital gameplay information to the player. One-hit kills like spikes should really stand out, but they don’t. Some enemies are even deliberately placed in such a way that you can barely see them before you run into them. The music is okay. It’s catchy enough, though bordering on annoying at times. Thankfully, they’ve ditched the constant ribbiting sound effect that used to play with every jump. There’s also Game Center support for leaderboards and achievements, but sadly, no controller support.

Superfrog HD isn’t a bad platformer, but it’s not a very good one, either. I love that the levels are huge, meaty, and full of secrets, but even with a new coat of paint, this game is still the same as it ever was: a second-rate pretender. Except this time, it’s on a platform that’s home to the real thing, and at nearly the same price, to boot. That said, we’re not so awash in classic-style platformers that this game can’t find a place in a genre fan’s library, and for gamers who devoted part of their childhood to the original, it’s a nice nostalgia trip. Most others won’t miss much by taking a pass on this toad’s wild ride.