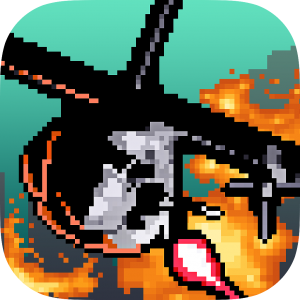 Pretty much everyone is familiar with Zombie Gunship (Free), the arcade shooter from Limbic Software that takes the AC-130 gunship sections from various Call of Duty games and turns it into its own full-blown, zombie killing experience. It was released way back in July of 2011 and has enjoyed great success, consistently topping the charts and garnering millions of downloads. Well, this past April 1st, Limbic announced in our forums that Zombie Gunship Arcade–a side-scrolling, 2D, “de-make" of their hit title–was in the works. As the story went, a catastrophic event with a soft-serve ice cream machine ruined all of Limbic’s equipment, and they didn’t have any backups of their work. So, the best they could do to get things back up and running on short notice was a simplified, retro-fied version of Zombie Gunship.

Well, it turned out that the whole announcement was just an April Fool’s joke… or at least, that’s what Limbic wanted you to believe. They’ve just sent word that Zombie Gunship Arcade is in fact a real game, and it’s coming this Thursday. Animated .gif of the gameplay embedded below.

As you can see, Zombie Gunship Arcade is a Flappy-like of sorts, and keeping with that theme Limbic states that “this game is hard, just like all the old [arcade games] used to be." Zombie Gunship Arcade will be free and ad-supported, with the option to disable ads via an IAP. It’ll also come equipped with Game Center leaderboards and support for iOS 7 controllers. It’s funny because, when Limbic first posted that thread in our forums for Zombie Gunship Arcade, I immediately thought “This is an April Fool’s joke!" and then immediately followed that thought with “But man I wish this was real!" Limbic Software: making dreams come true since April 2014.