For a media form so ripe for it, there’s been very little decent video game parody until recently. Thanks to the rise of independent developers who were born and raised on games, we’re seeing more and more games that tweak the nose of gaming’s history, some more affectionately than others. Blackmoor (Free) is a side-scrolling melee action game that is absolutely drenched in love for classic Japanese games, sending up or homaging works from Capcom, Konami, Technos, Nintendo, and more. Anyone can toss in Firebrand or a Dragon Punch and call it a day, though, so that’s not especially noteworthy. Blackmoor goes a little beyond the superficial trappings, which it admittedly revels in, and shows not just a fondness for characters and attacks, but also for the depth in mechanics of the action games that came out of those great companies.

Blackmoor tells the story of Duberry and his companions, who come into possession of an amulet one day while drinking in the tavern. Given instructions to take the amulet to Old Ben, a local wiseman, you set off with your choice of character, smashing and bashing your way through mobs of monsters. The game plays out over 16 combat-heavy side-scrolling stages, each one packed with enemies and peppered with one or more intense bossfights. Although there are light platforming elements, the game feels more like a flattened belt-scrolling beat-em-up. It’s a bit like Capcom’s X-Men or Marvel Super Heroes games on the SNES, if you’ve played those. The stages take you across a wild variety of locations, from an abandoned mineshaft to a spooky graveyard to the back of a giant owl in flight. 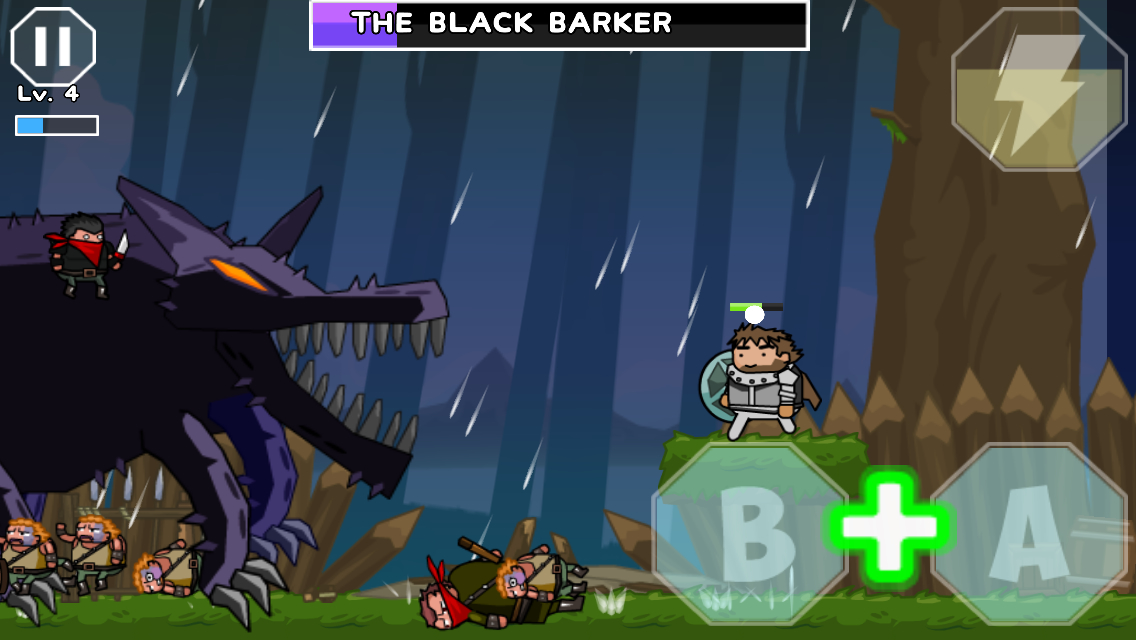 The stages are really just backdrops for the meat of the game, which is the combat system. While an overwhelming majority of the enemies are simple one-hit mooks, the game’s boss fights really show off the depth of the fighting in this game. It feels a bit like a halfway point between an action-platformer like Castlevania and a one-on-one fighting game like Street Fighter 2. The great thing is, depending on the character or weapon you’re using, it leans more in one direction than the other. Whichever character you’re using, you have access to a set of basic moves at the start of the game. You can jump, duck, and attack, with the duck move acting as your guard ability. Your attacks come out differently if you do them in mid-air or while ducking, and old fighting game staples like starting a combo by jumping in work very well here.

As you level your character up, you’ll have access to a greater list of moves, some of them command-based, like the fireball, which comes out exactly the same way it does in Street Fighter. The main character, Duberry, is a Shotoclone, and will eventually learn how to use a fireball, Dragon Punch, and Hurricane Kick. The cool thing is that these moves can actually be strung together to make combos, just as in the game that they’re borrowed from. The other initially playable character, Bolo, may look like Double Dragon‘s Abobo, but he starts off equipped with a chain that makes him feel more like a Belmont. How you approach boss fights with these two characters ends up being completely different, with Duberry’s fights feeling like intense Street Fighter battles filled with blocking, combos, and counterattacks, while Bolo’s feel like battles from Castlevania, using stun locks and area attacks to hold back a more powerful and agile foe. There are five other characters who also have their own unique moves and abilities, giving the game quite a bit of variety over the long term. 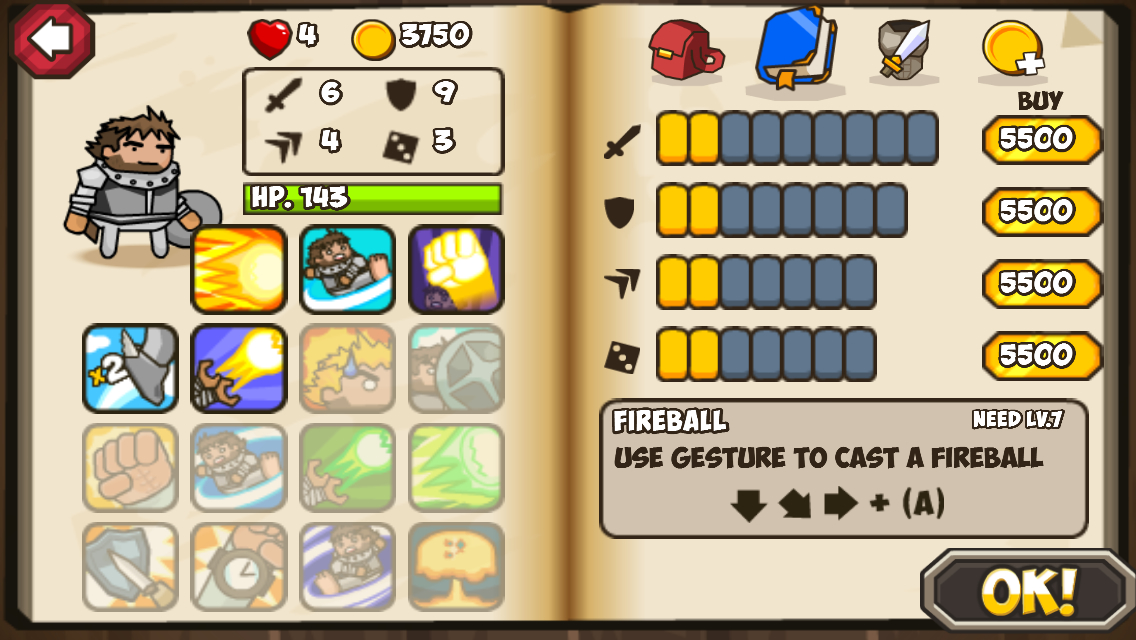 The boss fights are the main noteworthy thing about Blackmoor outside of its sometimes bizarre sense of humor. The stages leading up to them are generally made up of swarms of weak enemies, who only serve to whittle down your life bar a bit before you face the boss. The first time through each stage, they’re enjoyable enough, but after you’ve seen all the little references and visual gags, the lead-up to the boss doesn’t have nearly as much appeal. Each character has to make their own progress through the game’s stages, so you will have to repeat the stages at some point just on that basis. In practicality, you’ll be repeating the stages far more often than that, because Blackmoor, while fun, is a serious grind.

I should say first that if you get really good at the game, you’ll probably be able to finish it without having to grind too much. The combat system rewards mastery, and if you get really good at it, it’s very realistic that you won’t be taking many hits. I think, though, that most people are going to have to sink some coins into improving stats if they want to get anywhere. You do this by spending coins, which are dropped by enemies. Coins can be used to upgrade your stats, buy new equipment, or unlock new characters. While the equipment and first few levels of stat increases are priced quite reasonably, everything else is pretty crazy. Even with the IAP doubler in hand, I was constantly short on cash, and unlocking a character basically required a great deal of dedicated grinding. The game stands up decently to that grind, since it is quite fun to play at a core level, but even the strongest core wears down at some point and starts feeling like a chore. Of course, coins are always available as an IAP, so I guess if you’re really having a great time and are cool with tossing some real money at a new character, there’s that route. Continues are also available via IAP, with the game offering you a scant five for free across all characters. 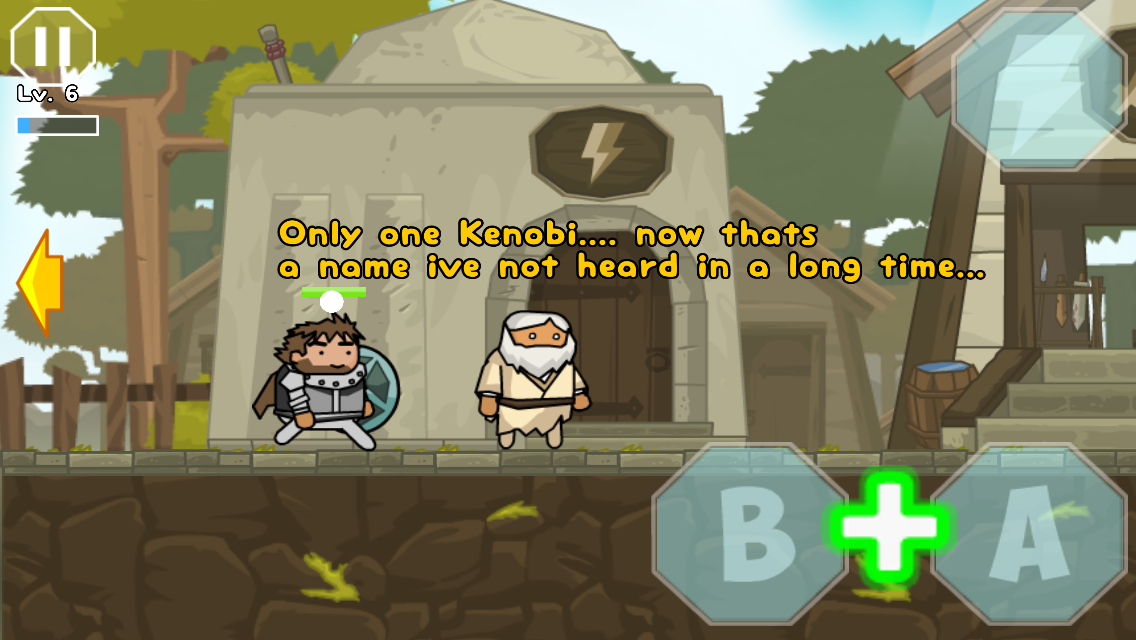 The game’s controls are interesting, but they don’t always work as well as you’d like them to. Jump and attack are mapped to virtual buttons, though aggravatingly, the developer has reversed the usual attack/jump convention, something that will irritate any classic gamer (It’s also something that should be rectified with an option in a forthcoming update). There’s one more button for your super move, which has a cooldown timer associated with it. Other attacks and abilities are command-based. The interesting part is your movement, which is not mapped to a virtual directional pad. It’s something more like a floating stick, allowing you to put your thumb down anywhere on the screen outside of the virtual buttons. There’s a white dot on-screen at all times, showing which direction you’ve got the stick pointed in at any given moment. Most of the time, it works, even with the command-based attacks where you might expect it to break down. The problem I had was with guarding. It’s a vital move that you’ll need to bust out at a moment’s notice, but the controls are sometimes fussy about that downward motion, giving you a one-way ticket to a combo-induced coma.

The graphics certainly have a particular style about them. They look kind of junky yet charming at the same time, and the silly way characters hobble along is funny. There’s a lot of stuff in here that is, I think, questionable in legal terms, but maybe the shield of parody will protect them. The sound effects are also suitably bizarre, with a lot of weird voice clips and sound effects. Blackmoor often feels like a big inside joke that you’re only partially being let in on, but that affords it a certain charisma if your sense of humor lines up with it. There are no Game Center leaderboards or achievements, which is a shame since leaderboards can sometimes alleviate the pain of heavy grinds.

Blackmoor is sometimes funny, sometimes surprisingly deep, sometimes intensely frustrating, and sometimes kind of dull. It already has some dedicated fans in our forums, and after spending a lot of time playing it, it’s not hard to see why. It’s the kind of game where a lot of people are just going to shake their head at it and walk away, but those that it clicks with are going to be in love with how much it offers. It’s a strange little game, and since it’s free, there’s no harm in checking it out. If you’re a child of the 8- or 16-bit era of console gaming, there’s a lot here that should appeal to you, even with its merciless grind and quirky controls.