It feels like forever since we first learned about the follow-up to Rocketcat’s awesome action RPG Mage Gauntlet (Free). It’s actually only been a couple of years, but in iOS time, that feels like a lifetime. Known by many names over the course of its development, Wayward Souls has finally been released. With all of that anticipation, there’s always a high risk of disappointment, but I’m very happy to report that Wayward Souls ($7.99) delivers fully on its promise. If you came to this review wondering if you should buy the game or not, let me save you some time: go open up the App Store and get this now. It’s an incredible game. It’s one of those games where after you play it, you’re filled with a sort of infectious enthusiasm that makes you want to tell someone all about it.

Luckily, that’s my job, so let’s talk about Wayward Souls. You could either call it an action RPG with rogue-like aspects or a rogue-like with action RPG aspects. The dungeons, including layout, loot, and monsters, are randomized and death is permanent. The basic goal of finding the exit on each floor is here, as well. Rather than the usual turn-based system found in rogue-likes, however, the combat in this game is real-time, feeling rather like the Legend of Zelda games or Secret of Mana ($7.99). While there’s a lot of luck involved in what kind of trouble you run into or what items you stumble across, it’s not quite as severe as rogue-likes usually are. Enemy attacks can be avoided through pure skill and good strategy, just as in a quality action game. It’s a little Diablo, it’s a little Demon’s/Dark Souls, but most of all, it’s a whole ton of fun. 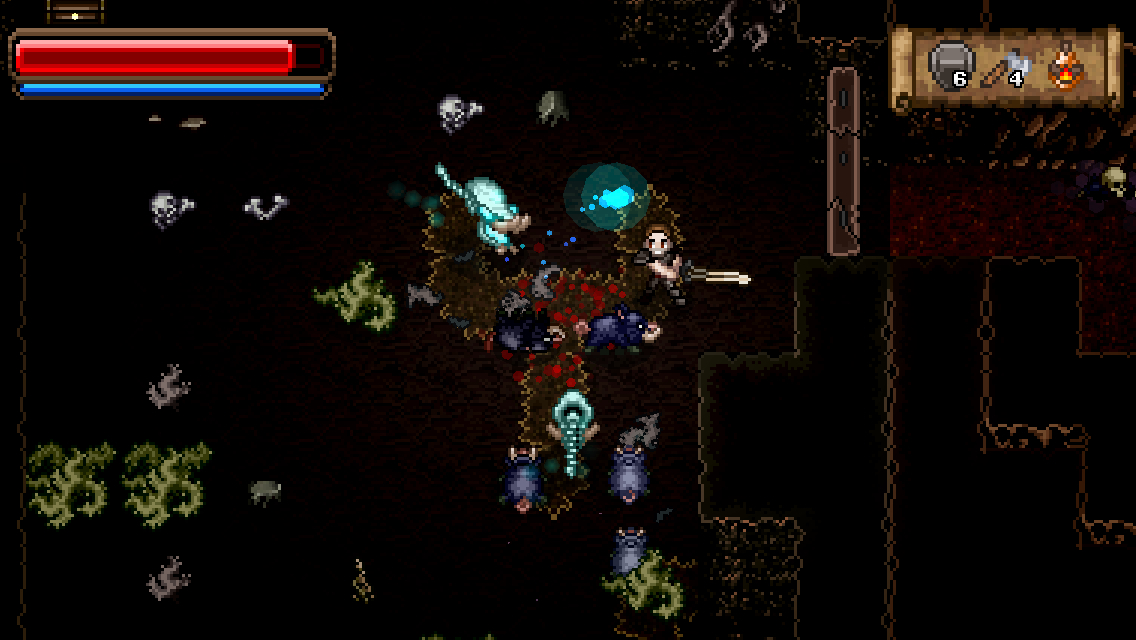 I don’t want to spoil much of the story since experiencing it is part of the fun, but suffice it to say, there is a big, bad tower with a big, bad guy in it, and you’ll take the role of one of six different characters looking to conquer it, each with their own story and stake in the battle. Each floor you clear with a particular character will give you a little bit more of their tale, while certain common parts of the story play out in real time in the dungeons themselves. If you want to get the every detail of the game’s story, you’re going to have to make your way through with every character. Each character has an interesting background to them, and peeling back the layers of their reasons for being at the tower is very satisfying.

Initially, you can only choose from three different characters, but by clearing each of the dungeons once, you’ll unlock three more. The starting choices are a warrior, a mage, and a rogue, while the unlockables are the adventurer, the spellsword, and the cultist. Characters vary not only in appearance and stats, but also in terms of abilities and items. The strategies for playing these characters successfully vary wildly, giving the game a massive amount of replay value. At the moment, I prefer the warrior, who makes slow and steady progress with his physical power and useful shield, but a good case can be made for any of the characters, since they all have advantages and disadvantages. Maybe the large HP and interesting bag of tricks will draw you to the adventurer. Perhaps you prefer a stick and move approach that the rogue can realize better than the others. 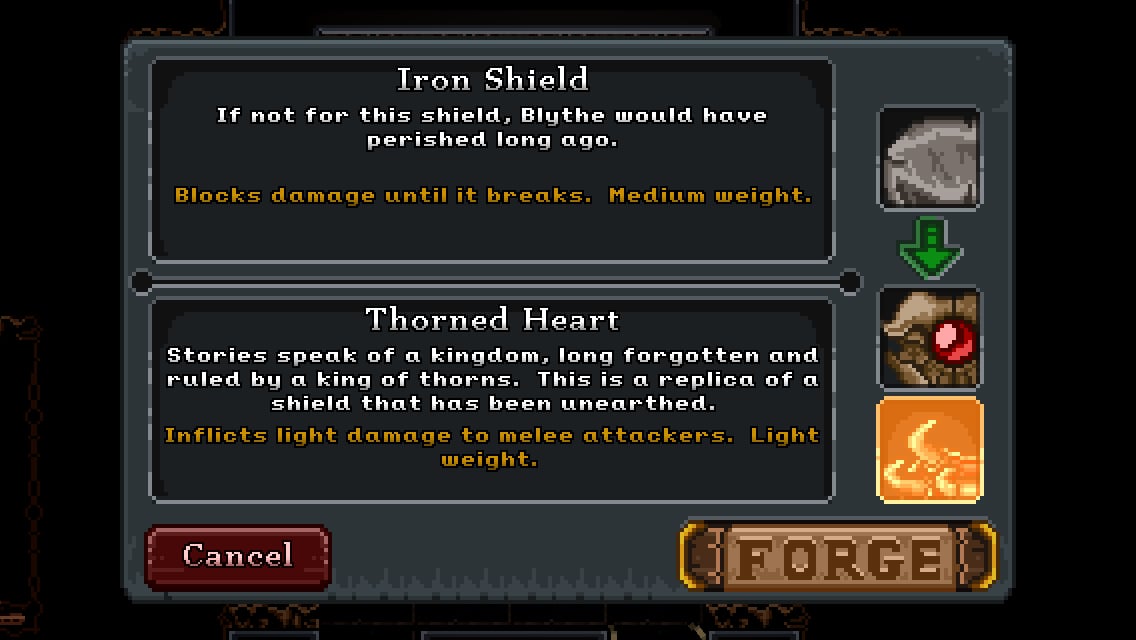 While you explore the dungeons, you’ll come across many useful items, along with shrines and forges. The shrines will grant you a temporary blessing of some sort, making you invincible or increasing your speed, for example. The forges allow you to choose between two power-ups for one of your traits or abilities. These power-ups slightly alter the look of your player, and will persist for the rest of that session. There are a lot of different effects and powers to discover, but don’t get too attached, because once you die, your character is back to square one in terms of abilities and gear. If an item looks useful, use it. Your inventory is limited anyway.

While you’ll lose almost everything when you die, the coins you pick up persist from game to game. You can use them to buy and upgrade various traits unique to each character. Even if you lose, you can come back a little bit stronger, which helps keep death from stinging too much. Also, once you’ve cleared a dungeon with a particular character, a checkpoint is made so that if you die, you can return to the start of the farthest dungeon you’ve reached. While the dungeons are made up of multiple floors, this small act of mercy at least ensures that you can make steady progress without having to do it all correctly in one run. There’s one other thing that you get to keep, though. Fans of Rocketcat’s awesome Punch Quest (Free) have surely learned to appreciate a good hat, and the developer has loaded Wayward Souls up with a ton of them to find. It’s a nice little touch of customization that also serves as a reward beyond the main game. 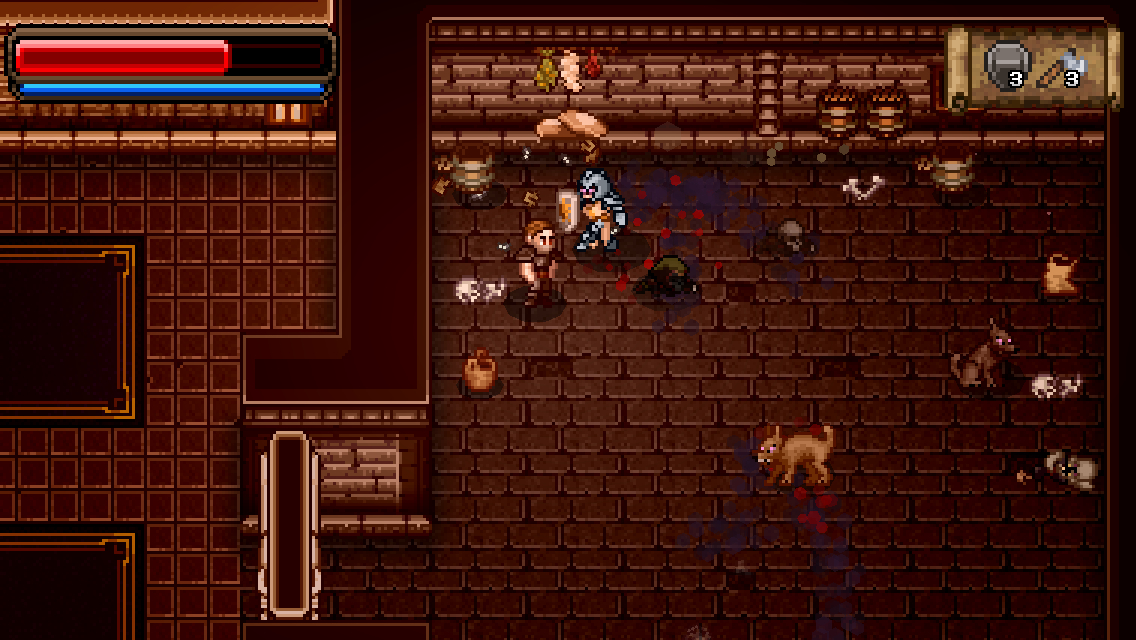 The dungeons themselves are amazing. Randomized dungeons can offer suffer from a general lack of character and variety, but that’s not a problem here. It feels like every single time I played, I ran into something I hadn’t seen before. The level designs seem to be striking a bargain between random and designed, which works out very well, providing diverse layouts while still including rooms that seem to tell a story through their design. Assisting with that is the spectacular attention to detail in the graphics. Rooms are full of little objects that exist for no other reason than to add to the atmosphere and be smashed. Even though they’re nothing more than set dressing and a place to hide coins or items in, they all still break apart with their own unique animations. Torches and lights brighten the areas around them, giving way to darkness if you destroy them. Just as enemies do, the remains of objects stick around for a while, leaving your fingerprint on each room you clear.

That attention to detail is evident all throughout Wayward Souls. There are tons of enemies, gorgeously detailed and beautifully animated. The player characters themselves look great, with fantastic animation quality. I’ve gushed about the destructible objects, but there are plenty of elements just there to add atmosphere, like lamps hanging from chains that swing when you run into them. This is some of the best sprite artwork I’ve seen in ages. If you told me this was a lost game from Squaresoft’s SNES era, I’d believe you in a heartbeat. What’s even more amazing is that the sound holds up its end equally well. The music is both varied and excellent, and the sound effects add to the setting and action just the way they need to. 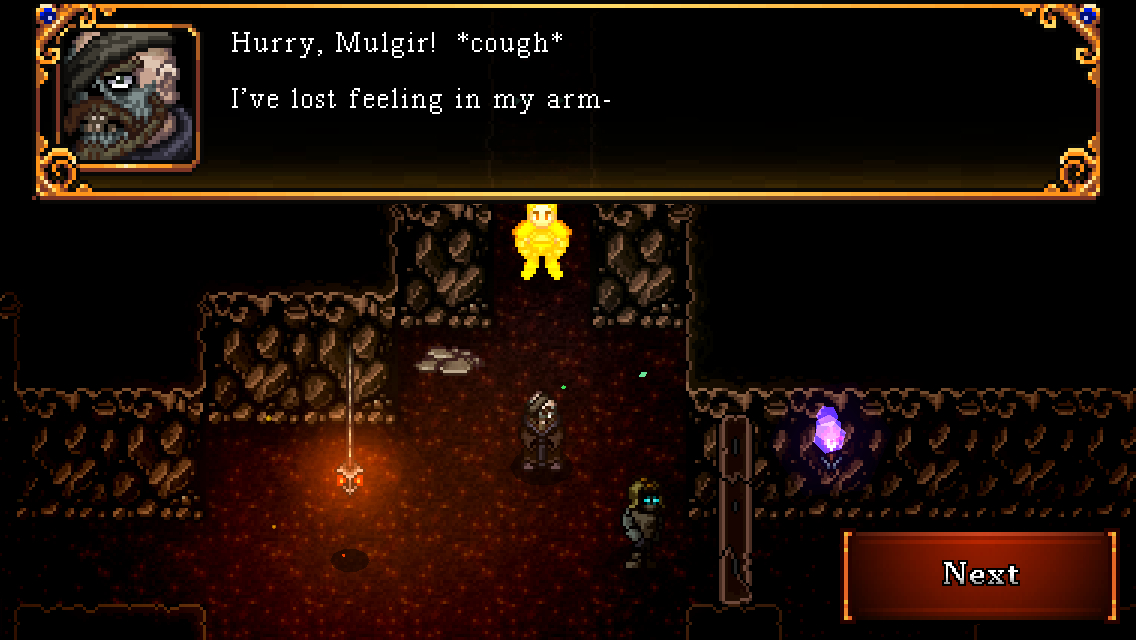 The controls are simple and intuitive. Use your left thumb to move your character around, and your right thumb for actions. Tapping on the right side of the screen will perform your basic attack, while holding it down charges a special attack. Flick up to use an offensive special ability, and flick down to use a defensive one. Items can be used by going into the menu and double tapping on them. That’s all there is to it, and it works extremely well. The action in this game gets pretty heavy at times, but the controls never once let me down.

Stunningly beautiful, jam-packed with replay value and secrets, and loaded with tons of great action, Wayward Souls is an absolute must-have. Seeing everything this game has to offer will take tons of time, but it’s time you won’t at all mind spending because it’s just so downright enjoyable. This is easily the top of the heap as far as mobile action RPGs go, and even compares favorably to some the best gaming in general has to offer. Hopefully you heeded my advice in the opening paragraph of this review and went to download it. It should be finished installing by now, so go play!