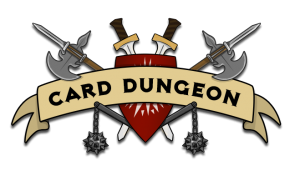 The title of this post is a bit of a paraphrase of how indie developers Fredrik Skarstedt and Ryan Christy describe their upcoming iOS game Card Dungeon, but if I know the TouchArcade audience then I’m sure a digital mashup of card game, board game and roguelike is bound to get your juices flowing. And that’s just what Card Dungeon is. It has roguelike traits in randomly generated levels, plenty of loot and gear, and permadeath. But Skarstedt and Christy are trying to bring the notoriously niche roguelike genre to a broader audience by building the game around one core philosophy: “You can only do 1 thing/take 1 turn. Choose wisely." In this way they’re hoping to tone down some of the complexity and steep learning curve of a roguelike while still retaining the depth and strategy that makes the genre such a winner.

In Card Dungeon, as the name alludes to, it’s all about the cards. There are tons and tons of cards in the game, and you’ll use them for pretty much everything, from equipping armor and weapons, casting magical spells, attacking monsters, defending attacks, disabling traps, and more. There are also Trait cards which directly affect your characters traits like the amount of damage they deal, their health and mana levels, and so on. The board game aspect comes in the way the game is presented: On a digital board with little digital cardboard standees for characters and doors. It’s a whimsical presentation, and you can get an idea of what it’s like in this brief video which shows how the creature summoning works in the game.

That’s an early video, but it gives you an idea of the direction of Card Dungeon. If you’re interested to see more, there’s plenty more videos on the Card Dungeon YouTube channel including lengthy developer diaries and other peeks behind the scenes on how the game is being made. Also, while not necessarily a new idea, there is a very cool twist on the whole permadeath thing. When you die in Card Dungeon, a tombstone is created at the point which you fell. If you’re able to make it to that same spot in the next play through, you can regain ALL of your lost equipment and gold from your previous game. If you don’t make it to that point however, a new tombstone is created from the new spot in which you’re downed, and that previous tombstone vanishes forever.

There’s definitely a lot going on in Card Dungeon, but it sounds like the developers have a clear vision on how to bring it all together in a cohesive fashion. There’s no set release date for the game yet, but you can find plenty of screenshots and additional info including a development blog at the Card Dungeon website and we’ll of course keep tabs on the game’s progress and will be talking more about it in the future.