So, who here can’t build a simple circuit without somehow starting a fire? Just me? Unfortunately, I am quite well-known for my frankly shocking ineptitude with anything involving the guts of electronics, which is remarkable given my many hobbies that involve them. You know that kid who started a fire in tenth grade science class? That was me. Luckily, nobody was hurt, which means we can all look back and laugh as we read this review only tangentially related to that anecdote. You see, Circix (Free) is a puzzle game that is skinned to look like circuits. While I’m terrible with circuits in real life, I’m quite good with puzzle games, so I figured I would give this one a try. I have to believe that there’s a much smaller risk of anything being enveloped in flames when it’s just a game on my phone.

Now that I’ve found the fire extinguisher and put out my eyebrows, let’s get back to this review. Circix is a deceptively simple-looking puzzle game whose main concept will seem a bit familiar if you’ve played the excellent Lyne ($2.99). In each of the game’s 200 included stages, you’re presented with some chips laid out on a grid. Each of the chips has a number on it, which represents the number of links to other chips that must be made in order to clear the stage. Chips can only be linked vertically or horizontally, lines cannot cross, and you must not link more than the precise number of wires to each chip. The levels are separated into basic, intermediate, and advanced difficulties, and come in sizes from 3 x 3 all the way up to 6 x 6. 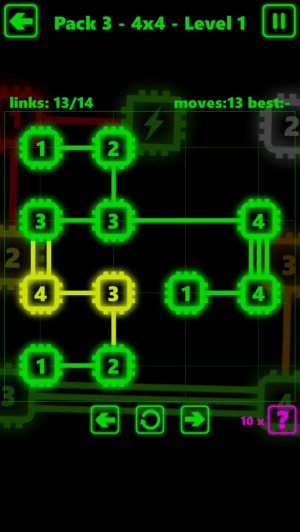 The basic levels are extremely simple once you’ve got the routine down. You can almost use the same strategy to plow through them mindlessly, and you’d be forgiven at this point for thinking the game lacks the essential hot sauce to be worth your time. The intermediate levels introduce double-links, where you might have to link a chip to another chip with more than one wire, while the advanced levels introduce triple-links, which are pretty much what they say on the tin. What starts off as a game requiring a very simple bit of logic becomes a serious tangled knot of challenges. Early puzzles take seconds to clear, but you might chew on later ones for tens of minutes, so finishing all 200 stages will take some time. Should you make it through those and want more, there are extra intermediate and advanced level packs available via IAP.

Even though we’ve seen a similar idea in Lyne, I think Circix plays differently enough to be worth checking out for puzzle fans. Since you don’t have starting points, ending points, or different shapes to guide your paths, the puzzles in Circix can be a lot tougher to crack. It does well in providing those wonderful “a-ha" moments you have in puzzle games where you’re just on the cusp of solving it, along with the horrible moments where you realized you’ve messed it all up. The game is quite easy to play, since you only need to draw a line between circuits with your finger to connect them. Removing a link is as easy as tapping it, so you can always fix your mistakes, though it will prevent you from getting a perfect score. If you get truly stuck, the game does offer hints, but after you’ve used up the 10 free ones the game gives you, you’ll have to pay some real money if you need more. Of course, it’s also quite nice how the game gives away so many puzzles for free. There are apparently ads, though I didn’t see any, and if they bother you, you can IAP those away. 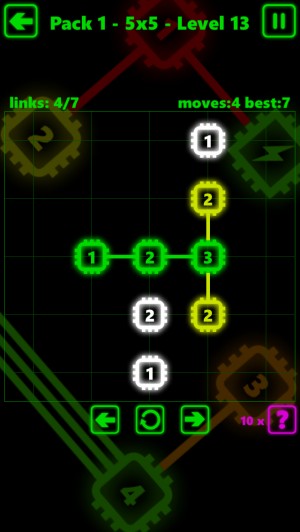 All that said, there are some things I don’t enjoy about Circix, almost all to do with the presentation. Something about the graphics results in them being just a little too plain and unexciting. There are moving elements in the background, but it feels like the foreground stuff should be a little more interesting. The worst part is the total lack of music. Apart from the little zapping sound effects of laying out a link, the game is played in silence. While I suppose no music is better than annoying music, the best puzzle games usually have some type of tune to accompany the action. Naturally, Game Center is not supported, either. Tied together with the somewhat plain UI and simple visuals, all of this gives the game a bit of a cheap feeling that belies the gameplay found within. The play is the thing, of course, but nothing wrong with tightening up the graphics on level three, right?

Aside from its unattractive presentation, Circix is a quality title. Even with at least one similar game out there, this style of puzzle feels unusual enough to make the game stand out a little. I wouldn’t recommend this ahead of Lyne since that is overall a more complete package, but if you’ve already played that game and like the basic idea, or simply want to try something free, Circix is worth checking out. You’ll get some good logic puzzle fun out of it without paying a cent, and there’s plenty more available at a very low price after that if you enjoy it. On top of that, the risk of fire hazard is extremely low.