Spider-Man video games act as little mini time capsules of the video game industry. I’m not sure why, but perhaps it’s because they release so regularly and haven’t found a unique voice the way Batman recently has with the Arkham series. As such, they tend to look to trends for inspiration, and we can see that pattern in many of the games. Maximum Carnage on the Genesis and SNES showed the popularity of belt-scrolling beat-em-ups in the 16-bit era. Spider-Man on the original PlayStation nicely demonstrated both the rise of polygonal graphics and their hard limitations via the poisonous gas that prevented you from going down to the streets. Spider-Man 2, no doubt riding on the back of Grand Theft Auto, introduced an open world, something that has gone as well with Spidey as anything ever could. Spider-Man 3 was a QTE fest, Web of Shadows used an awkward Bioware-style moral dichotomy, Shattered Dimensions had Arkham-style stealth levels, and the console Amazing Spider-Man had support for motion controls.

The iOS Spider-Man games aren’t all that different in that regard. Total Mayhem ($6.99) showed off the power that smartphones brought to the table, while still having that amateur production feeling many mobile games of the period had. 2012’s The Amazing Spider-Man ($6.99), with its implementation of a true open world Manhattan to play in, felt like an excessive celebration of how far the platform had come in terms of technology, with a framerate to match that decadance. Look at a Spider-Man game, and you will get at least a part of the picture of the market in which it existed. That’s part of what makes The Amazing Spider-Man 2 ($6.99) such an unfortunate state of affairs. 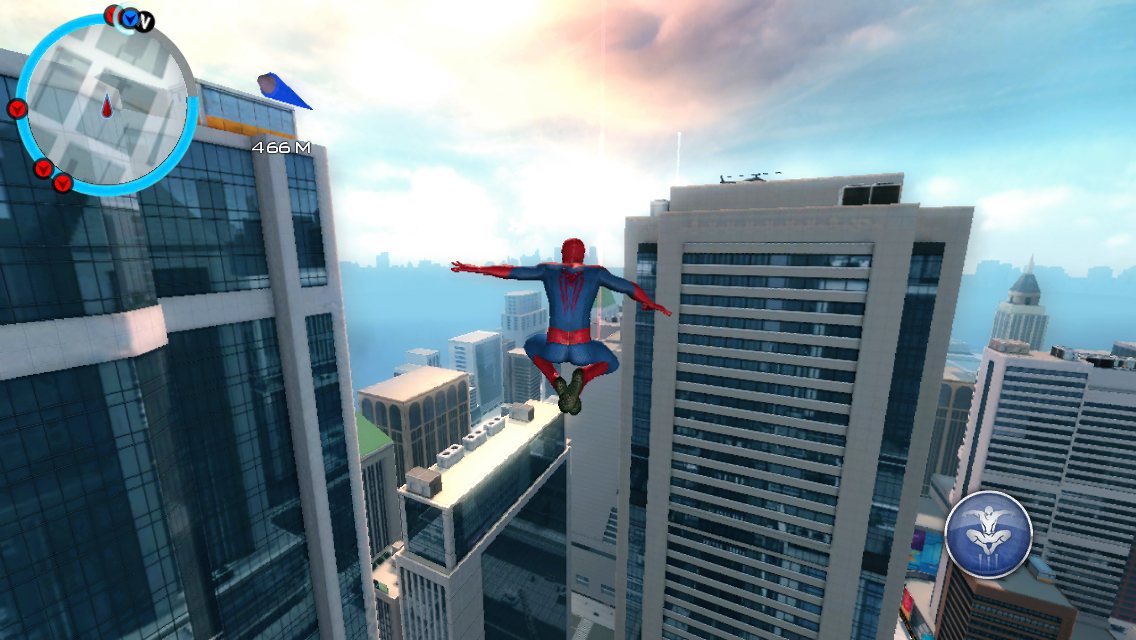 It does buck one recent major trend in that it’s not a free game. Instead, it seems to truly be on the bleeding edge, since it contains a great many elements we would associate with a free game in the past, yet it has a price tag on it. You’ve probably already heard about the online requirement. It is indeed in the game, and at least so far, it’s working about as disastrously as the worst naysayers could imagine. Every single time I’ve started up the game to play it for this review, the game has told me I have no internet connection, when my internet seems to be working fine for everything else on my phone.

I assume this is an issue with Gameloft’s servers. I’ve basically had to sit there hammering the retry button for a minute or two until I can get through every single time I’ve played. On top of that, the online component seems to make the game very crash prone if you need to suspend it for any reason. Just the notification of receiving an email was enough to make the game halt in its tracks once. As the final cherry on top, this frequent online access, in conjunction with the high performance of the game, means this app will suck your battery dry very quickly.

I understand Gameloft’s reasons for including this restriction, and I’m not going to go into whether I agree with them or not since that’s not really salient to this review. What I will say is that if you intend to put this kind of element into a game, please make sure it works. It is incredibly irritating to be sitting next to a high-speed wi-fi router and have a single-player game refuse to run with the message that there is no internet connection. I’m sure this problem will be reduced as the server load decreases, but right here, right now, I have a game obstinately refusing to let me play without a whole lot of effort. If this is the plan going forward for their library, Gameloft needs to step their tech game up, badly. 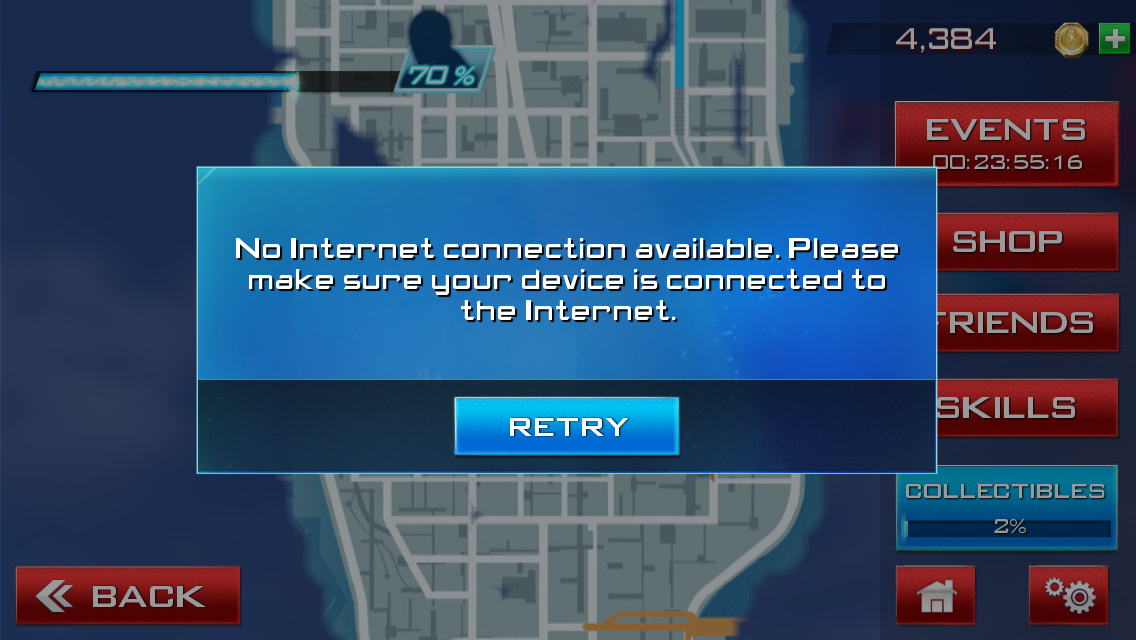 Maybe you’ve also heard about the IAP in the game. There is a selection of extra costumes you can use in this game that modify your stats a little bit. Extra unlockable costumes are pretty much a calling card of Spider-Man games, and fans love seeing long-forgotten and/or minor looks for the character in motion. Including these costumes doesn’t take that much work on the developer’s end due to Spidey’s love of skintight outfits, and fans love them, so it’s sort of a win-win. The Amazing Spider-Man 2 includes several costumes. You start with the default movie costume, which looks pretty much exactly like the default comic book style. You can use the game’s basic currency to unlock Kaine’s Scarlet Spider costume, or you can get it by collecting a lot of extremely rare tokens. These rare tokens can also be used to unlock Miles Morales’s Ultimate Spider-Man outfit and Doc Ock’s Superior Spider-Man outfit, or you can buy them for $2.99 and $4.99 respectively. Finally, the popular Symbiote Spidey and Iron Spider costumes are only available by IAP, to the tune of $7.99 and a ridiculous $14.99 each. Worry not, though, because you can buy the whole set of costumes for a deal-licious discount of $25.99. The sheer audacity of it is almost admirable.

I guess in Gameloft’s defense, you don’t need these costumes at all. They’re simply bonus items. That’s unlike Spidey’s various skills, which the game frequently requires the use of to progress the story. As in the last game, you can power Spidey up by using the currency you earn to unlock new skills on a web/tree. You’re free to power up the skills you like, though they do get expensive pretty quickly. The problem is that certain story missions will suddenly spring it on you that you need a particular skill, and if you’ve made the horrible mistake of not being able to read the game’s mind on the skills it wanted you to buy or, heaven help you, bought any of the game’s consumable boost items, you’re going to have to go and grind out the cash doing the game’s side missions.

Initially, you get about 50 Spider-points for doing a side mission. The first skill the game requires you to buy costs 1000 points. The next one costs 2000 points. Some side missions also require particular skills unlocked. I don’t mind this as much, but when you actually make me go solve 40 repetitive side missions before I can go on with the main game, that’s ridiculously poor design. Actually, I guess it might be great design depending on your perspective, since Spider-points are available as IAP. It’s not a fun thing for me as a player, I’ll tell you that much. 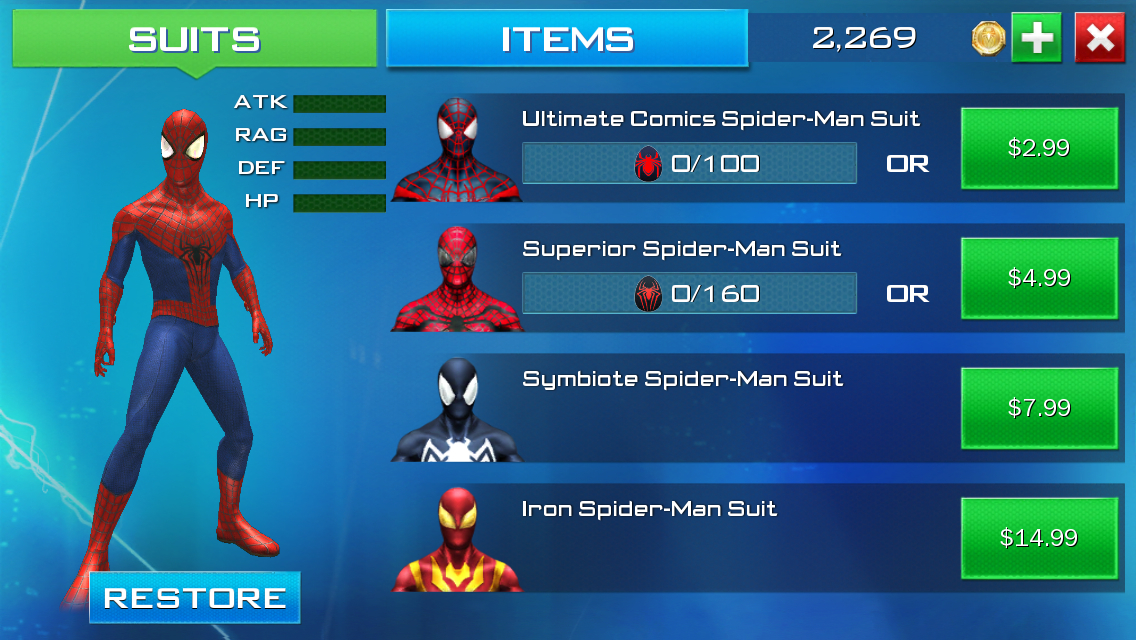 So, arbitrary online requirement that has no benefit to the player, absurdly priced cosmetic IAP, and forced grinding that can only be alleviated by blind luck or buying consumable IAP. A true work of art, to be sure, but how’s the actual game? That’s the sad bit. The game itself, separated from all of this garbage, is pretty fun. It’s not substantially different from the first game, but the controls are a bit smoother, the side missions are a bit less horrible, the voice acting is leagues better, and the graphics are even better than they already were in the last game. That last point once again results in a game that seems to be specced for unreleased hardware, since even on my iPhone 5S I was getting an iffy framerate at times, but it was still very playable when it wasn’t booting me out due to connection problems. The city’s a bit more alive, with more traffic and pedestrians. The side missions aren’t even that bad the first few times you encounter them, though like the console open world Spidey games, they get old in a hurry.

The controls are very similar to the last game, with a jump/swing button and a virtual stick when there are no bad guys around, and a virtual stick with three buttons for attacking, webbing, and Spidey-sensing while in combat. There are occasional QTEs that mostly crop up in boss battles. Moving around the city feels pretty good, although Spidey is still cloud-slinging and swinging in general is a bit more simplified than I’d prefer. There’s no controller support in the game yet, which is too bad, but the main touch controls are more than up to the task. Combat is still button-mashy with timed counters, but that fits Spidey fairly well and has been the general go-to for his games for over 10 years, so there’s not much to complain about here. There’s also Game Center support for leadboards and achievements, with a pretty big selection that will keep you busy for a while if you’re into hunting them.

The leaderboards are connected to another of this game’s new features, Mysterio’s Arena. To play, you need to use a ticket which can be bought for 1000 Spider-points (so, 20 side missions). The game generously gives you the first one. In this mode, you have to fight off as many enemies as you can to earn points. When you run out of life, you’re done. Your total will be compared tournament-style to other players at the end of each week, and the top three winners will get a miserable handful of tokens towards an unlockable costume along with a stash of consumables. Hey, if you win first place in the world for 10 weeks, you’ll be able to get that nifty Ultimate Spidey suit. Others get some Spider-points, though most will likely just barely break even on the deal by winning a key. 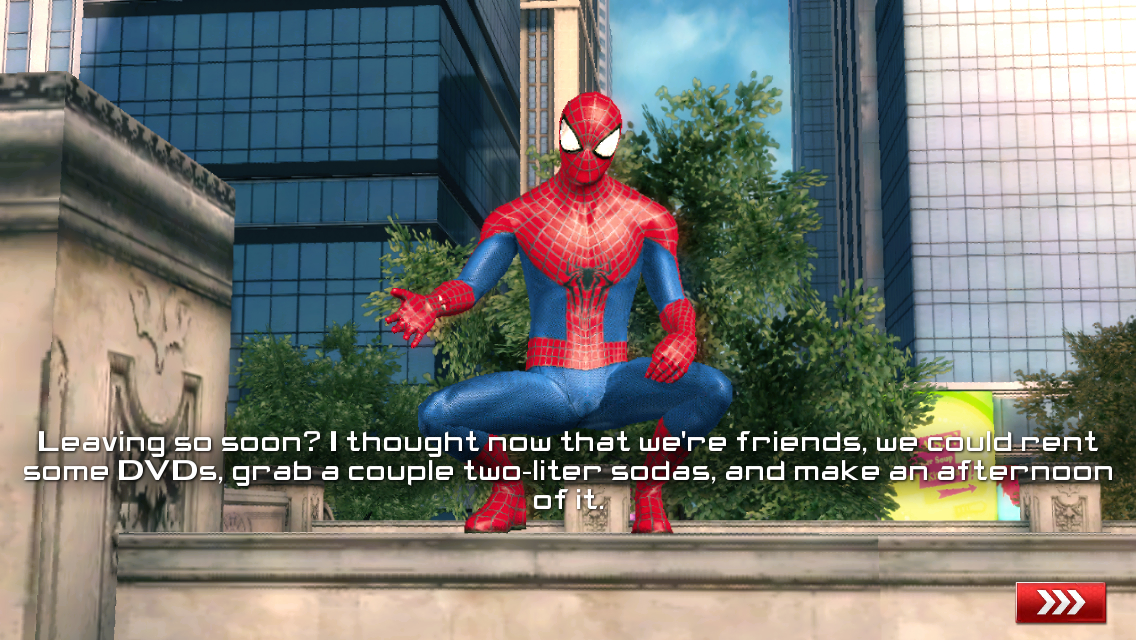 I guess this is approaching a rant at this stage, so I should probably wrap things up. The Amazing Spider-Man 2 is marginally better than the previous game in many ways, and I’d dare say we are approaching the quality of the early console open world Spider-Man games in most respects, which is a delight for just a fiver. At the same time, there are a variety of things included in this game that not only do not benefit the end user but actively sabotage the entire experience of trying to enjoy the game. Railroading players into repetitively engaging the side mission content (easily the part of the game least able to stand up to such scrutiny), trying to push long-term daily play on a game design that doesn’t properly accomodate it, and hiding fanservice behind massive paywalls are all aspects that do their utmost to disrupt any enjoyment you’re gleaning from the decent content. That the persistant connection is handled so poorly that the game kicks or locks you out at times is either the cherry on top of this mess, or a sweet mercy.