Arena battle games have really come into their own in recent years. Mobile platforms in particular have enjoyed a great crop, including Super Crate Box (Free), Muffin Knight ($0.99), Spell Sword ($0.99), and many others. It’s a great way for a small developer to make a great action game without busting the bank, while providing a nice bite-sized bit of fun that suits mobiles well. Of course, for the gamer looking for something more than just a slice of game now and then, the better examples in this sub-genre have included some sort of progression system that persists beyond individual plays. Typically, this is done by putting in some sort of collectible or experience system that will unlock new weapons or abilities, which not only gives you something to shoot for over the long term, but also refreshes the game experience over time to keep it from getting dull.

Groundskeeper2 ($1.99), the latest release from OrangePixel, handles this idea in an interesting way. The unlockables are a front and center part of the game’s description, but when you actually play the game, it keeps a bit of a veil over the whole process of unlocking things. When you start, you get a brief story scene to set things up. The world is locked in a war with supernatural robots from space, and you play as a resistance soldier who plans to fight to the last, taking down as many aliens with her as possible. Killing robots causes bits and bobs to drop, and collecting enough of them will open a portal to the next arena, where your health will be restored but things will heat up ever so slightly. Each time you lose, you’ll meet the groundskeeper, and you might unlock something new. Eventually, your new unlocks will come mid-game, enabling you to play with your toys as soon as they’re ready. 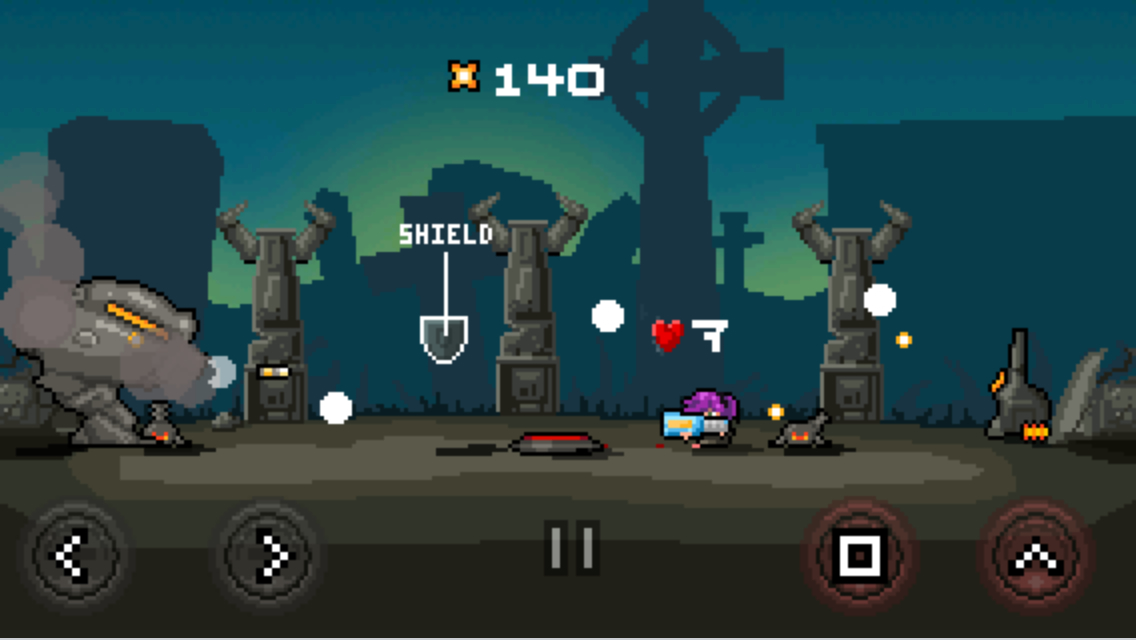 It’s kind of cool how the game handles things from a story point of view. Obviously, you’re dying all the time, but the upgrades you collect are immediately accessible from the start of the next round. The groundskeeper himself seems to persist, since he comments on your death each time, but there seems to be an infinite amount of purple-haired resistance heroines. It’s not in your face or anything, just a slight nod to the bizarre nature of lives in video games, but I thought it was pretty cute. Your progress on unlockables is displayed prominantly on the title screen, and getting 100% should take anyone a fair amount of time.

Your default weapon is a gun that shoots reasonably quickly with low attack power. Enemies spawn in randomly, and every so often one of your unlocked power-ups will appear. Boxes sometimes appear, and inside you’ll find either a heart to restore some of your life, or just more bits and bobs. Like most games of this type, your goal is survival, but the best way to facilitate that is to use the portals to restore your life. You have to collect a set amount of bits and bobs to open the portal, usually 25 or 50, but once it’s opened, you can use it whenever you like, so it’s not a bad idea to hang around until your life is low before jumping in. In addition to the enemies, each stage has some type of hazard that will do heavy damage to you if you get in the way. In one level, what looks to be a giant sword drops down, while in another, an aerial bomber flies overhead and carpets the whole stage in explosions. 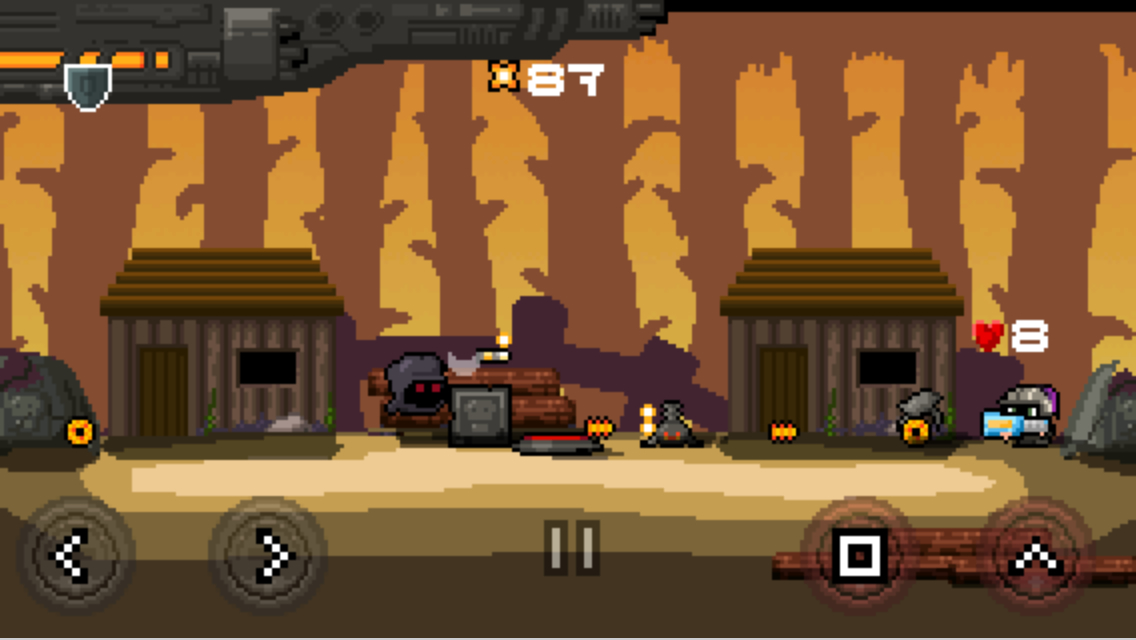 The game controls well, with virtual buttons used for moving left or right, shooting, and jumping. Most of the time, you’ll just be moving back and forth, gunning down everything in your way, but you will sometimes need to jump to avoid bullets or hit a flying enemy. The arenas themselves are pretty flat, so you’re generally just focusing on the enemies and their attacks. The shooting has a good feel to it, with even your default gun’s shots knocking the enemies around nicely. That feel is greatly supported by the generally excellent animation of both the main character and the robot enemies. The challenge is mostly focused on overwhelming you with large numbers, but you will occasionally fight a larger enemy. It’s all very chaotic, but you’re given enough hit points to leave you with a comfortable margin of error.

In terms of presentation, Groundskeeper2 goes retro just about all the way. The graphics are 16-bit style pixel art, and as I mentioned before, everything animates well. The backgrounds are a bit sharper than the main sprites, and they paint a great atmosphere of a world at war. Sometimes elements in the background will be damaged or destroyed as you play along in the foreground, and while this doesn’t have an effect on gameplay as far as I can tell, it’s a nice touch that helps bring the game world alive just a little bit more. The music is more 8-bit style, sounding very much like the kinds of stuff coming out of the UK when Commodore’s computers were taking names and kicking butts. Sound effects follow along these lines, with the exception of the voicework, which is decidedly more modern, albeit super-cheesy. Another modern element is the Game Center support for leaderboards and achievements. The leaderboard just keeps track of how many bits and bobs you’ve collected, while the list of achievements is short but interesting. 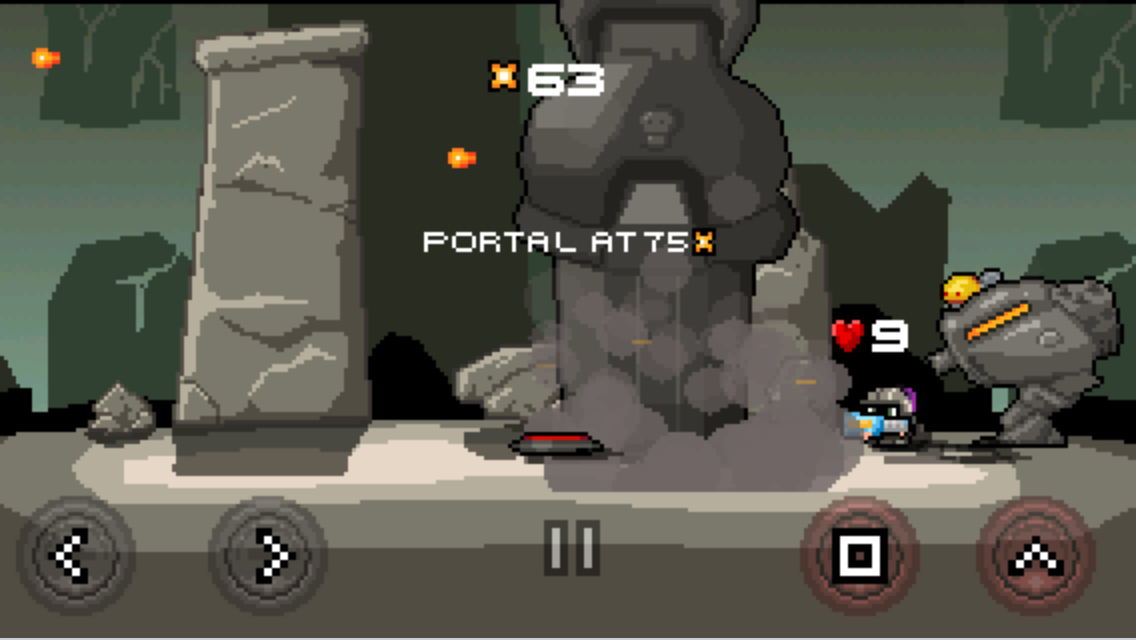 Groundskeeper2 is an entertaining action game that will keep you busy blasting bots for bits and bobs for a while. If you’ve got room in your heart and 18 MB on your mobile device for another fun arena-based shooter, I recommend you check this one out. It’s certainly made a bit of a splash in our forums. Oh, and just to spare you a maddening search, the original Groundskeeper was apparently made for a game jam, so you won’t find it on the App Store, no matter how many times you hit the search button. Don’t worry too much about it, you’ve got an apocalypse to cancel.