Do you like Star Trek? Specifically, do you like the original series, with reckless Captain Kirk going on tons of away missions with Spock, Bones, and Redshirt, breaking the Prime Directive whenever he feels like it all in pursuit of adventure and alien love? If so, you’re going to want to check out Tin Man Games’s latest mobile conversion, Fighting Fantasy: Starship Traveller ($5.99). It’s an utterly shameless love letter to Star Trek, and it happens to be one of my very favorite books in the Fighting Fantasy series. I’ve played plenty of Star Trek games over the years, more than the franchise has deserved given the somewhat sorry state of quality they usually offer, but in my opinion, nothing has captured the feeling of the original Trek quite as well as this little gamebook written by Steve Jackson.

Starship Traveller was the fourth book released in the Fighting Fantasy series, and the first one to break away from a fantasy setting. Along with the change in setting, it has new rules for ship combat and phaser combat, which complement the usual melee rules. You also have a crew with you for this adventure, each with their own job and stats. Whenever you beam down to a planet, you can choose a couple of crew members to take with you, and who you take with you will affect your options. New to this version of the game is the ability to name your ship and crew, offering a little extra bit of customization to the proceedings. So, if you want, you can name everyone after Trek characters, name your ship the Enterprise and enjoy the homage in full. Alternatively, you can name everyone after Voyager characters, name your ship Voyager, and dazzle at how that series accidentally copied this gamebook’s premise. 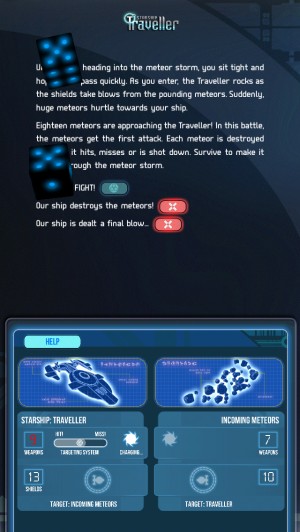 In Starship Traveller, you play as the captain of a starship. Your ship is sucked into a black hole, stranding you far from home, and your only hope of returning is to find the right black hole at the right time to send you back. The only problem is that you’re in totally unfamiliar territory, so you’ll have to do some investigating to find out when and where the black holes appear, and even then, if you pick the wrong one, you’ll meet a grisly fate. You’ll visit several planets, make contact with a variety of alien species, and face danger of many sorts. It’s a well-written book that, in spite of feeling for all the world like a piece of fan-fiction, makes for an enjoyable read with lots of surprises.

It’s kind of interesting that Tin Man has chosen this to follow up Island of the Lizard King ($5.99) in their series of Fighting Fantasy conversions, since in many ways, these two gamebooks are almost opposite to one another. Lizard King is extremely combat-heavy, but in Starship Traveller, it’s possible to finish the book without rolling the dice even once. Lizard King is fairly serious, orthodox fantasy, while Starship Traveller is more of a light-hearted sci-fi romp. Lizard King offers many viable routes to the ending, relying on combat wearing you down as the main source of difficulty. Starship Traveller only has one route that will give you a good ending, and frankly, finding that route depends heavily on luck or repeated plays, since there really aren’t any clues that indicate who’s giving you good info and who’s setting you up for death. The main thing these two books have in common is the capricious way they rely on random factors to determine your outcome.

I love Starship Traveller, and I’m sure that comes through in my writing, but getting down to brass tacks, it’s actually not a very good gamebook, mechanically speaking. There are fewer choices than most Fighting Fantasy books, virtually no items to find or use, and it’s next to impossible to succeed on the first try, no matter how clever you might be. Many people don’t like how light on combat it is, and the ending is extremely anti-climactic, whether it’s good or bad. I can and do acknowledge all of these faults, but I feel like the unusual setting and the sheer earnestness of the writing elevate this book among its peers anyway. Sometimes you read a Fighting Fantasy book and feel like the author is forcing it for whatever reason, but on rare occasions in the series, you can feel a sort of genuine enthusiasm coming through, like the author is having just as much fun telling the story as they expect the reader to have playing it. Starship Traveller is one of the better examples of the latter sort. 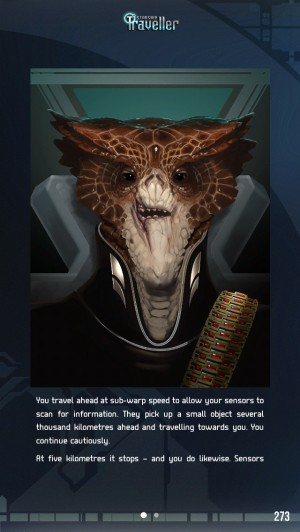 As for the conversion by Tin Man Games, I’m sure I don’t need to say it’s fantastic. Due to rights issues, all of the original artwork from the gamebook had to be replaced, something that could have been absolutely devastating given how much these releases depend on nostalgia. Instead, it’s been turned around into a positive, with sensational new art provided by Simon Lissaman, whose detailed illustrations perfectly capture the spirit of classic science fiction Starship Traveller is aiming for. I liked the art in the original book, of course, but there’s something to be said for the advantage of using art designed for a high resolution mobile display versus using art designed for a black and white paperback. I also like how Tin Man didn’t restrict themselves to trying to make the interface look like a book. Instead, taking full advantage of the sci-fi theme, the interface looks more like a futuristic tablet. My only gripe is that on my iPhone, the buttons for making choices are a little too small, along with the text itself.

Like many of Tin Man’s other recent gamebooks, Starship Traveller includes a list of achievements that encourages you to explore every possibility and offers some vague hints about what you’re supposed to do. There’s also a bit of supplementary material, including an art gallery and write-ups about Fighting Fantasy and this book in particular. You also have your choice of difficulties between classic, which plays by the rules of the original book for the most part, and free read, which lets you heal yourself whenever you like, go back pages at your leisure, and unlock choices whether or not you’ve earned them. Interestingly, due to the nature of this book, free read doesn’t make as huge of a difference as it usually does, so you’re in for a bit of a challenge either way. With that in mind, I recommend playing it on classic difficulty, because if you’re going to get beaned over the head anyway, you might as well do it with pride.

It’s interesting because in the increasingly large mobile gamebook scene, I find Starship Traveller stands out for exactly the same reasons it did 30 (oh my, is it really 30?) years ago. We’ve got lots of fantasy books, some horror books, a few modern books, but this energetic take on classic sci-fi is a breath of fresh air, not just for its theme, but also its eccentricities, both good and bad. The absolute best Fighting Fantasy books are still to come, but this is one of the real classics in the series, so if you enjoy gamebooks or goofy sci-fi, I encourage you to give it a try.