Hurtling endlessly forward, leaping from rooftop to rooftop, avoiding obstacles that will put a quick end to your trek. Collecting coins to upgrade abilities between rounds, completing missions to earn a rank up that adds to your multiplier. Grabbing a collectible item, you’re sent soaring up to a bonus area packed full of coins. Maybe this time you’ll finally earn enough coins to unlock those pricey new characters, each of whom has a unique trait. Skyline Skaters (Free) isn’t going to win any awards for originality.

Skyline Skaters is, of course, an endless runner, side-scrolling, solidly built, with very little in the way of new ideas. Every inch of it is familiar, from the characters who look right out of Subway Surfers (Free), to the rooftop setting we’ve seen in dozens of other runners, to the mission and rank system from Jetpack Joyride (Free) and almost every runner since. That’s a pretty big strike from the get-go for a game in a genre as well-trodden as this. Pretty much every person with a mobile device likely has a go-to runner already installed on their devices, so it’s a bit hard to get excited about a game that fails to distinguish itself in any aspect. It’s a collection of checked boxes and not much more than that.

Which isn’t to say that it fails to check those boxes well. Skyline Skaters is a good game all-around, with bright, colorful graphics, a nice art style, snappy gameplay, and plenty of unlockables to work towards. It doesn’t have anywhere near the variety found in games like Jetpack Joyride, mind you, but the core gameplay feels pretty good. It’s free to play, and it’s very much geared towards that, with extremely expensive extra characters to buy, pricey one-time boosts you can buy at the beginning of each run, and the costs of upgrading increasing exponentially as you go along. There’s a premium currency that you can use to continue a run right where you’ve left off, buy coins, and skip any pesky missions you can’t finish on your own. You can even watch an ad to get a free random boost for your next run. There are apparently ads in the game which can be removed with the purchase of any IAP, but I never saw even one in the whole time I was playing, so even if you opt to pay nothing, you probably won’t be annoyed too frequently.

Most of that stuff is par for the course with this genre, and if you can keep that in mind, Skyline Surfers is actually quite enjoyable. To be sure, it’s a grind, but it’s a fairly pleasant one. One thing I’m really not fond of is the ability to continue a failed run in exchange for premium currency. I’m not a big fan of endless runners that let you do that. It takes a lot of the fun out of the high score competition knowing someone can buy their way to a better run, and that competition tends to be where most of the fun is derived from these games. Not that it matters greatly anyway, since both Game Center leaderboards for this game have been hacked six ways to next Tuesday already. 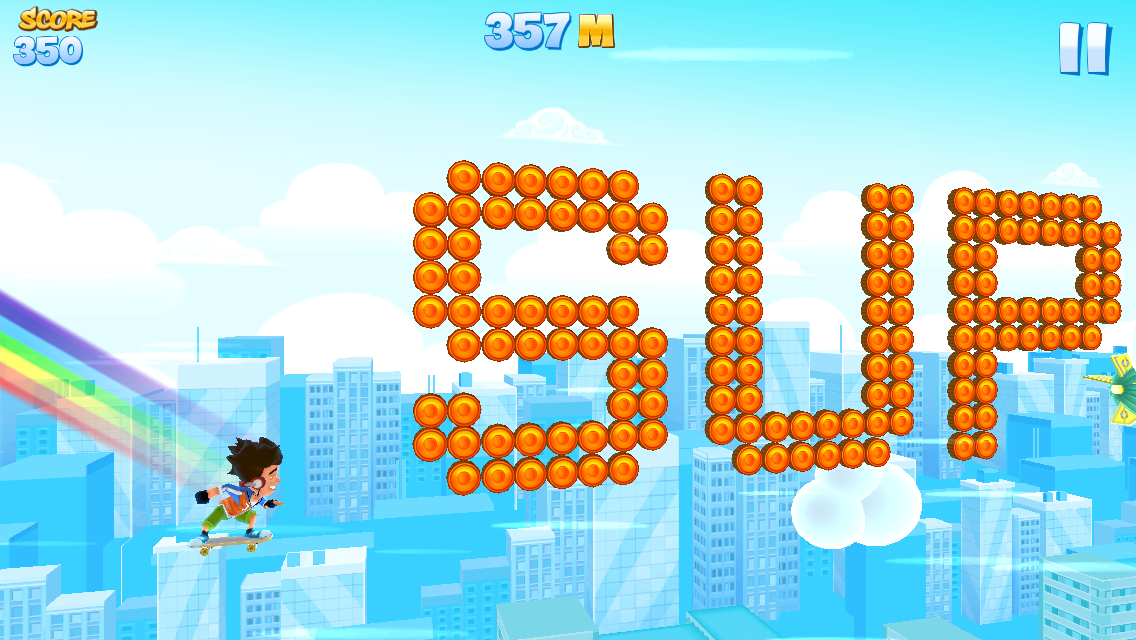 The controls are simple and work well. A tap on the screen makes your character jump, and you can tap again in mid-air to do a double jump. You’ll automatically grind any grindable surface you land on. The only other thing you have to worry about is when you’ve collected all of the letters to enter Super Skate mode, which launches you into a coin-filled bonus area. For these brief sections, the controls ape Jetpack Joyride pretty closely. Initially, you really only need to focus on not falling off the rooftops, but once you’re a little ways in, you’ll have to deal with oncoming missiles, dangerous robots, and more. You can get away with hitting certain weaker obstacles, which merely slow you down and temporarily allow the helicopter chasing you to nearly catch up, similar to the monkeys chasing you in Temple Run (Free). Most obstacles will put an immediate end to your escape, however, so it’s best to play it safe and avoid everything.

During your run, you can pick up the usual gamut of power-ups, like a coin magnet, a boost, a shield, and a score doubler. As you’d expect, the effectiveness of these power-ups can be upgraded using coins between runs. Coins can also be spent on buying and upgrading boards, improving your multiplier and scoring in diferent ways. There are a ton of boards to unlock, and you can burn through coins pretty quickly upgrading them, but coins alone won’t buy you the whole set. Some of the boards can only be bought with premium currency, and a few more still can only be bought in the shop for real money. Skyline Skaters also really, really wants you to connect your Facebook account, offering an exclusive character, board, premium currency, and other on-going bonuses. 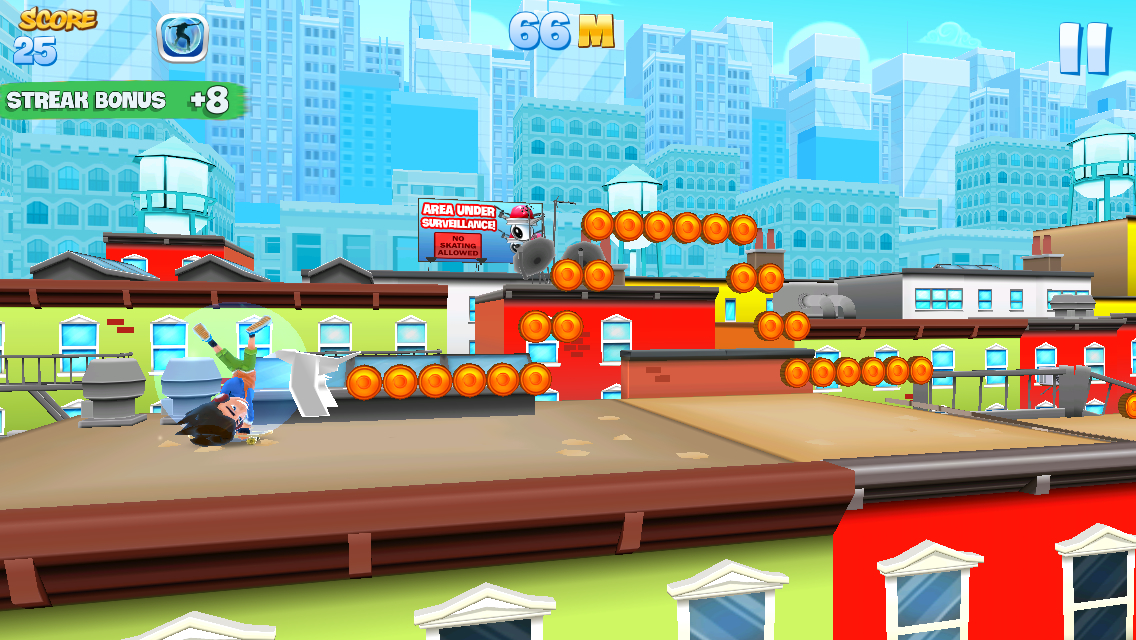 Skyline Skaters is a solid enough game, and I think I’d be a lot more taken with it if I hadn’t already played to death the games it clearly uses as inspiration. If you don’t mind its lack of ambition, you’ll probably have a really good time with it. I just have trouble, at this point, getting too excited with generic efforts in this genre, no matter how competent they might be. Unfortunately, while it doesn’t drop the ball in any meaningful way, Skyline Skaters is about as generic as they come.