The genre our hobby labels as “puzzle games" has got to be one of the broadest categories in entertainment. As such, the variation we see within that genre is massive. Sure, wherever there is success, there will be clones, but outside of naked attempts to imitate something great, it’s fairly unlikely for any two random puzzle games to resemble one another, even in broad strokes. I’m not sure if it will prove to be a blessing or a curse for developer Radiangames, but it’s certainly a bizarre bit of kismet that their new puzzle game, SideSwype ($1.99), a game about swiping blocks around on a grid, has landed just after the phenomenal Threes! ($5.99), which is also a game about swiping blocks around on a grid. There’s absolutely no way this was cobbled together in the brief period of time since the release of Threes!, as it’s incredibly polished and well-thought out, so we’re left with one of those situations where we have to marvel at how interesting life can be sometimes.

SideSwype is the third puzzle game from Radiangames, who previously brought us the excellent Slydris ($1.99) and Crush! ($1.99). It shares some aesthetic choices with those games, but the gameplay itself is quite distinct from them. 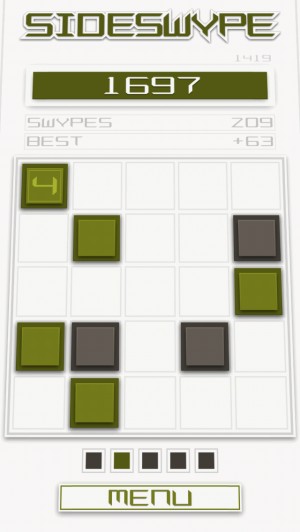 In this game, you’re presented with a five-by-five grid, with some of the cells occupied by squares of two different colors. You can swipe up, down, left, or right to move all of the blocks as far in that direction as they can go. If that swipe results in three or more of the same colored square lining up horizontally or vertically, those blocks will be cleared and you’ll earn some points. Each swipe also brings new squares to the grid, with more being added as you play. You’ll also sometimes get squares with a number four or five in them, which can only be cleared by matching them in line of four or five squares. Clearing them will earn you a special block that can help you remove more squares. If the board is filled and you can’t clear anymore squares, it’s game over.

The ability to take your time thinking about your move evokes Slydris‘s deliberate pace. Like that game, you can see which pieces are coming next, though you can’t see where they’re going to spawn, so there’s a random element to it that keeps things a bit tense. There’s no pressure to make moves quickly, though it certainly feels good to do so. You’re at your leisure to plan ahead and try to set up combos to earn more bonus points, or match longer lines to earn special squares. Of course, a randomly spawned square can still throw a monkey wrench into the best of plans, but that’s part of the fun.

The key to success is in managing the numbered squares. If you have too many of those, things can get messy in a hurry, since, while you can still use them to match and clear out regular squares, you’re going to run up a deficit each time. Clearing them grants you one of two special squares. Removing a square with a four marked on it gives you a square that, when used in a match, will destroy the squares around it, regardless of their type. Using a square with a five in it in a match will give you a square that, when matched, will clear out every square of the same color that it’s connected to. Both of these are great for clearing out stubborn pieces and opening up the board. They also present an element of strategy. Do you use the exploding square to take out some stubborn five-squares, getting them out of your way, or do you save those fives in hopes of matching them into powerful color-clearing special pieces?

That’s about all there is to the gameplay in SideSwype, which ends up being the game’s biggest issue. It’s a very simple game to learn and play, but it’s a bit lacking in depth, which is very important for a puzzle game’s longevity. Although the game will spawn more and more squares as you play longer, the basic gameplay strategy never changes up. It’s missing that feeling of building pressure that I think is quite crucial to this type of experience, something that was used very well in Slydris and Crush!. That makes it easier to just chill out and relax with, but the lack of tension combined with the relatively simple design hurts the game’s lasting appeal. It’s very easy to put down, and that’s not generally something you want to say about a game. Not helping matters in the depth department is that unlike previous puzzle games from Radiangames, SideSwype only offers one mode of play. 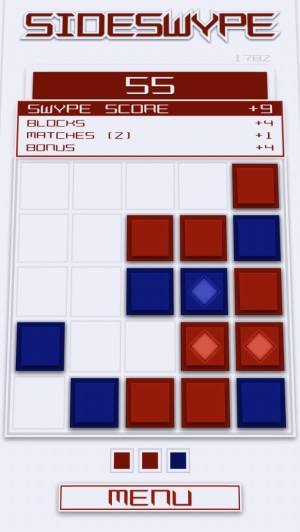 In all other respects, SideSwype is what we’ve come to expect from this developer. It has an attractive, consistent visual style, excellent music, a canny use of sound effects to enhance gameplay, and an easy to understand user interface. There are some unlockables in the form of alternate color schemes, and there aren’t any IAPs whatsoever. It has Game Center support, with a leaderboard to compare high scores and a short list of achievements. This developer clearly knows how to make a beautiful, polished gaming experience, and they handle it so consistently well, they almost make it look easy.

SideSwype is, if nothing else, a solid, playable puzzle game. Taken as its own thing, if you like block-puzzle games at all, you’ll get your money’s worth out of it. It’s nice to look at, listen to, and play, and its more relaxed pace and difficulty gives the game a certain appeal that will work for some more than others. Fans of Slydris and Crush! will want to give this game a look, even if it’s not quite up to those two, just to enjoy another good puzzler with the unique sensibilities of a Radiangames release. Ultimately, however, as a puzzle game fan, I find SideSwype scratches a very similar itch to Threes!, but doesn’t do it quite so satisfactorily.