Family Guy is one of those shows you either love or hate. You love its humor, whether it’s offensive or not, with some pretty memorable characters (Greased Up Naked Deaf Guy? C’mon). Or you hate it, think it’s stupid, and can’t understand how a show like that is on the air. Whatever your view, Family Guy is here to stay, and Seth McFarlane is one of the biggest people in the industry at the moment.

Which pains me to say that, as a huge fan of not only the show but of McFarlane himself, Family Guy: The Quest for Stuff (Free) is quite a boring, slow game filled with aggressive IAP badgering. The story is stupid (in a good way) and falls in line perfectly with the show: Peter and the Chicken get into a fight that culminates in the destruction of Quahog, and it’s up to you to rebuild the town.

First, the good. The Quest for Stuff looks very good. TinyCo has done an amazing job modeling Quahog. Houses look like they do in the show, all the way down to minor details like the little mesh sheen on the solarium part of the Griffin’s home. If a building is animated in the show, it’s animated here, such as the sign at the top of The Drunken Clam. The music that plays throughout is the Family Guy theme, as well as some music heard throughout various episodes of the series. There is very little voice acting in the game. Aside from the introductory cinematic and the quips they say when you tap them, the majority of the quests are delivered through speech bubbles, sans the speech. 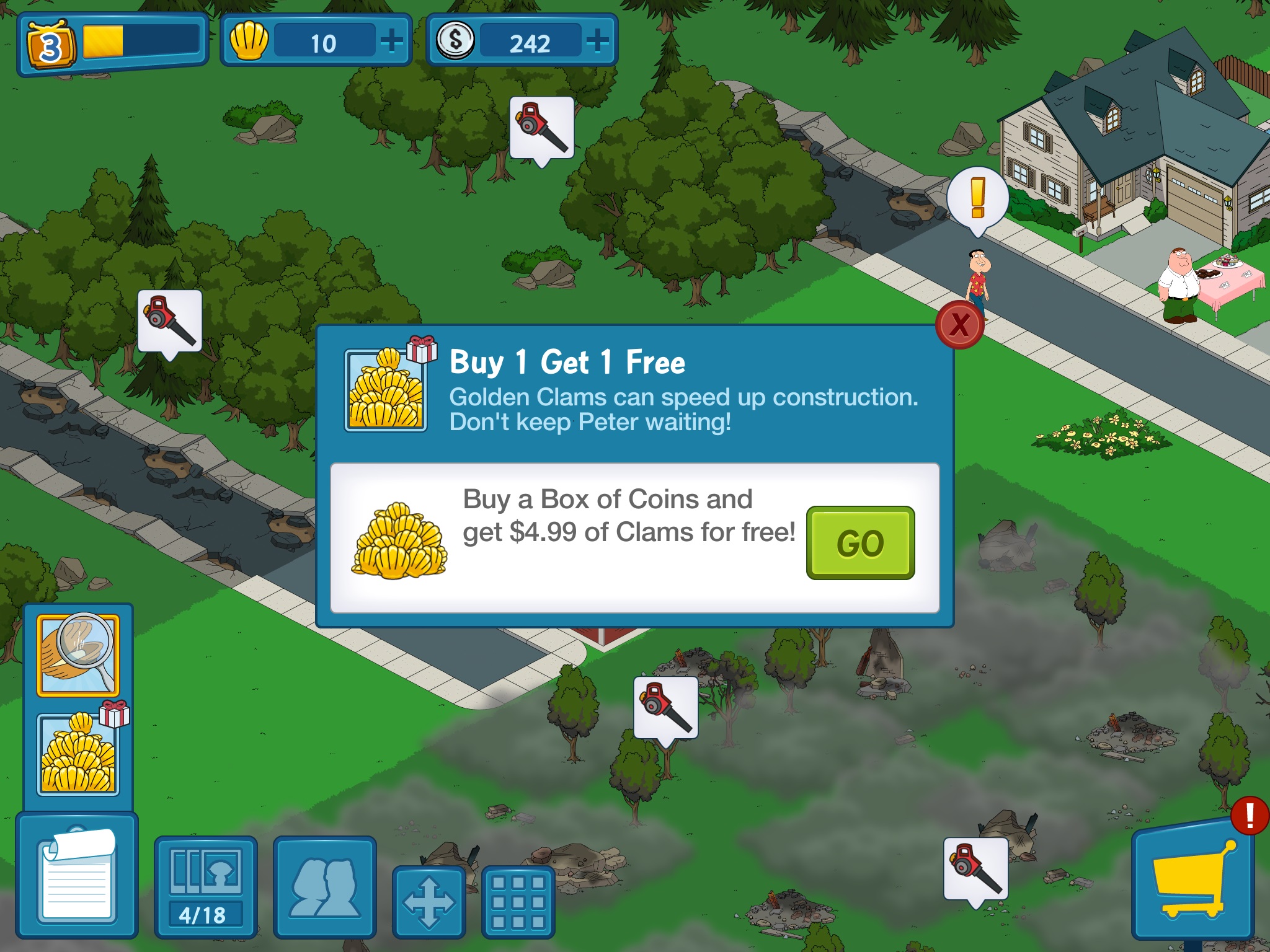 TinyCo has gone a long way with the fan service here. Aside from the multitude of buildings (like McBurger Town, The Founding Father Restaurant and James Woods High), bits of various episodes have made their way in, as well as characters. Greased Up Naked Deaf Guy, Herbert the Pervert, Bonnie, Jerome, Mort, Mr. Pewterschmidt, to name but a few. You can buy objects like the Golden Pool, the Hindenpeter, Petercopter, Wanna-Bang-Oh, even Crippletron. If it’s remotely memorable from the show, it’ll be in the game.

The game contains FaceSpace, which is TinyCo’s take on Facebook, that acts as a collection of characters. When you unlock a character, they’ll appear in FaceSpace, with a profile appropriate to them. For example, Quagmire has status updates of “One day ago: Checked in  at Quahog Motel”, followed by “One hour ago: Checked in at Quahog Hospital.” As each character levels up, occasional rewards will be a new FaceSpace post, in addition to new items or actions.

Yes, characters themselves level up. You level up as normal by collecting items and completing missions, but characters do too. Every time a character levels, they’ll gain access to a new action, a new costume that needs to be built at Al Harrington’s (apparently he’s no longer a Wacky Waving Inflatable Arm Flailing Tube Man), and more. You can unlock Hooker Peter, Twerked Out Peter, Speedo Quagmire, and more. You can tap a character and then select an action, or if an action requires interacting with something, like Chris with a bed of flowers, you can drop the character onto the item to perform the action.

If you remember from one of the episodes, you can enter the Multiverse that Stewie has found, which is basically you visiting neighbors, performing actions for coins, XP and sometimes clams, before returning to your own Quahog. 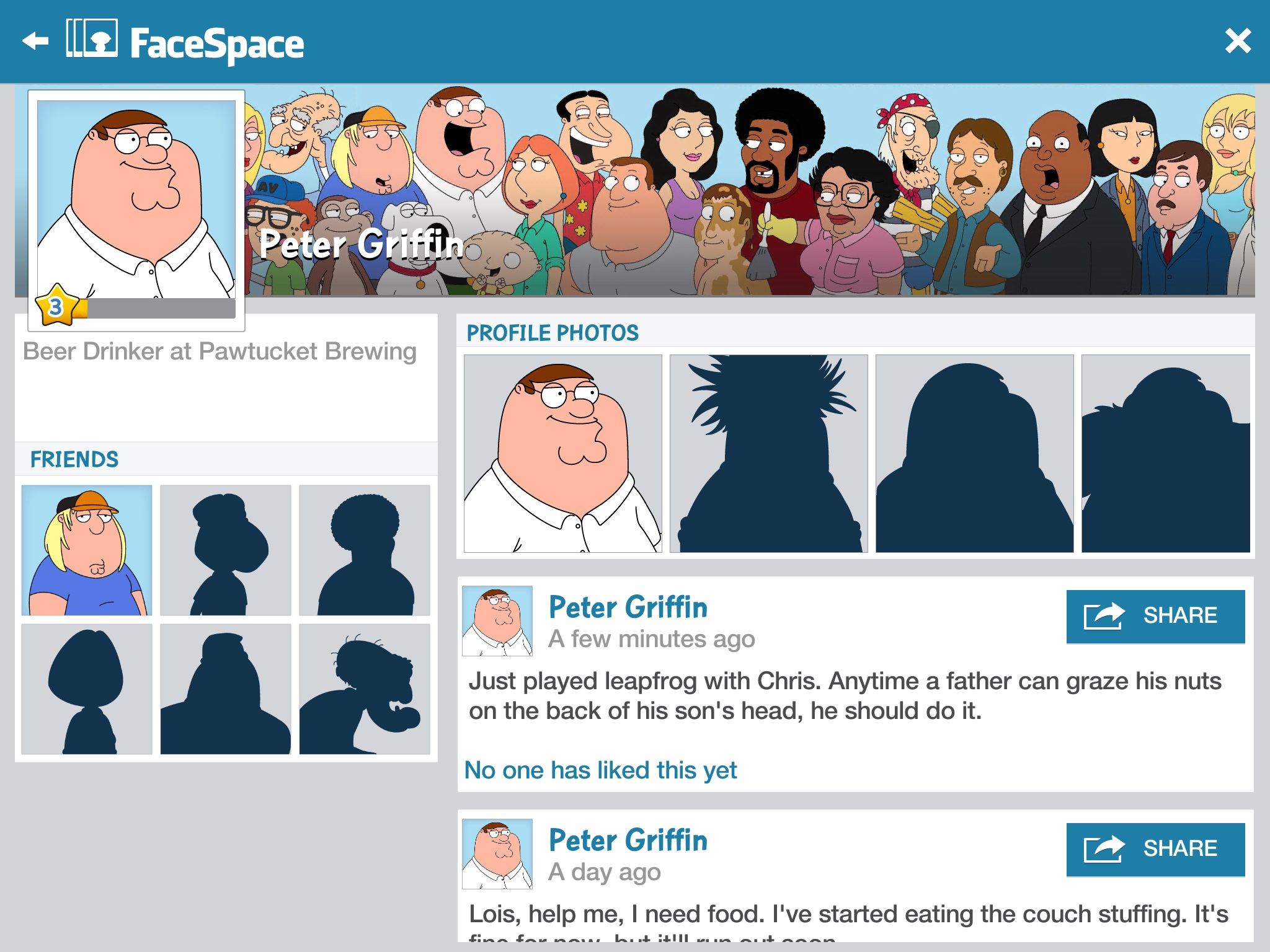 With the good out of the way, we sadly have to come to the bad.

Similar to The Simpsons: Tapped Out (Free), The Quest for Stuff is loaded with IAP, and most of the fun and fancy buildings will require clam shells, the premium currency. Unlike the aforementioned game, though, you are constantly badgered, directly and indirectly, to purchase clams. One of the first missions tasks you with buying a $4.99 IAP of coins, and they’ll give you $4.99 of clams as a bonus. Unlocking characters requires you to perform tasks with others, and while not being a required action, one of them is to perform a task by a character only available from a premium item purchase. You’ll be pestered often by Stewie, who doesn’t unlock for a while, to buy clams. If you buy this building now for 600 clams, we’ll give you those 600 clams right back! Sounds like a good deal, but still requires money. Prices are at least on par with similar titles.

After the first four or so quests, you’re immediately put into long action times. I played the game for nary a half hour when one of the missions that popped was to make Bonnie go to ladies night, which carries a ridiculously long timer. It’s okay though, you can speed it up. Want to buy some clams? Because of the constantly long action times, the game is very slow paced. I’ve been playing for hours, and still have only three districts unlocked because of the timers.

The game can be offensive, especially when it comes to Mort and Jerome, but that’s expected based on the humor of the show. If you’re offended by what some characters say in the show, you’ll be offended here.

Family Guy: The Quest for Stuff may appeal to fans of the show; it’s hard to say with certainty that if you like the show, you’ll like the game. The humor and styling of the show is here, and there is a ridiculous amount of fan service to be had, but it’s ultimately a very slow paced game, with aggressive and constant prompts to buy clams, and more waiting around than actually playing. And for those reasons, I simply can’t recommend it.