Fans of PC Tower Defense titles may have heard of Prime World: Defenders (Free). Originally released back in mid-2013, this 3D TD title made a splash offering a complete TD experience supplemented with aspects from a few other genres. Nearly a year later, Defenders finally makes its debut on iOS, a platform that should (in theory) fit it perfectly. While iOS TD aficionados will easily see that Defenders was obviously designed for the PC, it’s still a great title for fans of the genre.

Combining card collection, role playing mechanics and tower defense mechanisms, Defenders is highly reminiscent of the recent released Man At Arms TD ($4.99), but with different emphases on its respective systems. The RPG mechanic features a simplified leveling system with a wealth of talents that can be purchased with in-game currency to add some strategic nuance. Meanwhile, the actual TD mechanics are fairly standard in terms of enemy and tower types, strengths, weaknesses and so on. That’s not to say it isn’t enjoyable, but genre buffs looking for the next great innovation should explore elsewhere. Recently, the game was updated with additional modes, including a survival map, which adds more meat that supplements the game’s campaign. 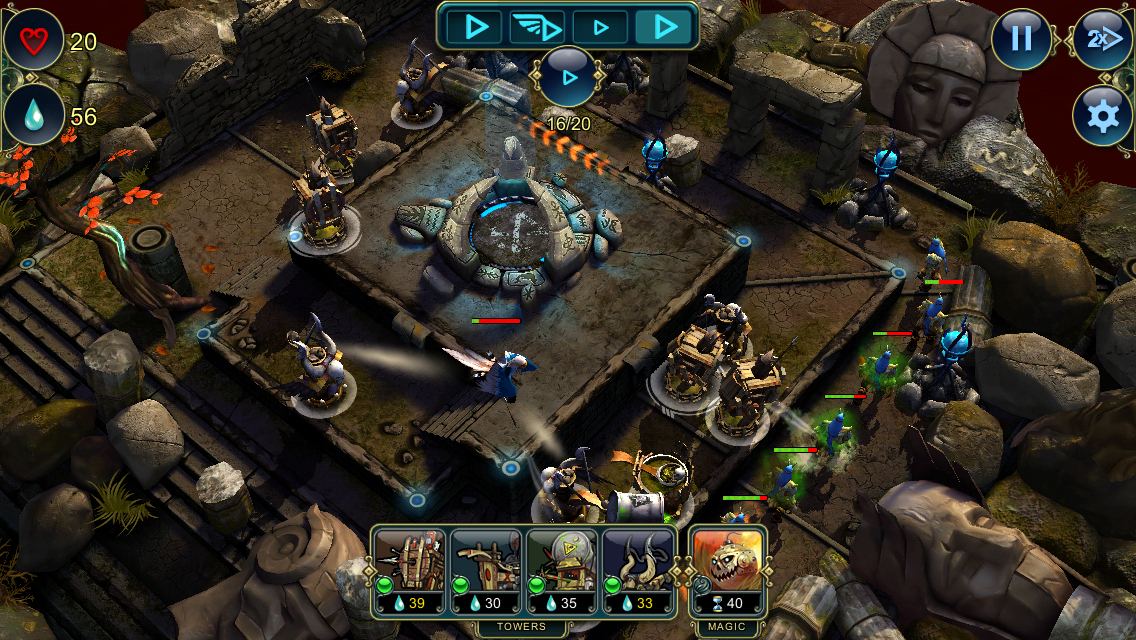 The card collection facet, meanwhile, is the deepest aspect of the game and the one that gives Defenders the majority of its breadth of content. Each tower that can be deployed is collected as a card. There are two methods to improving cards: Evolution and Fusion. Evolution allows players to combine cards of the same type together to unlock greater evolution levels, which dictate strength and upgrade paths. Meanwhile, cards can also be fused with different types of cards to increase their base level (support cards are primarily used for such fusions) or to create entirely new cards. Completing missions reward in-game currency and random cards, so use of both upgrade paths is imperative to keeping up with the difficulty.

Every part of Defenders has been seen before in some shape or form, but the game does a great job of merging them together into a cohesive game. Primary TD levels are accompanied by “random” encounters of varying difficulties that can be run to grind currency and new cards. There’s a decent amount of tower types and there’s enough variety in map design that tower selection is somewhat important. While there’s plenty of IAP in terms of currency (premium and otherwise), I found it all to be highly optional in terms of getting through the game. The story, told mainly through cutscenes, isn’t particularly groundbreaking but I enjoyed it enough that I wanted to continue playing to follow the tale. 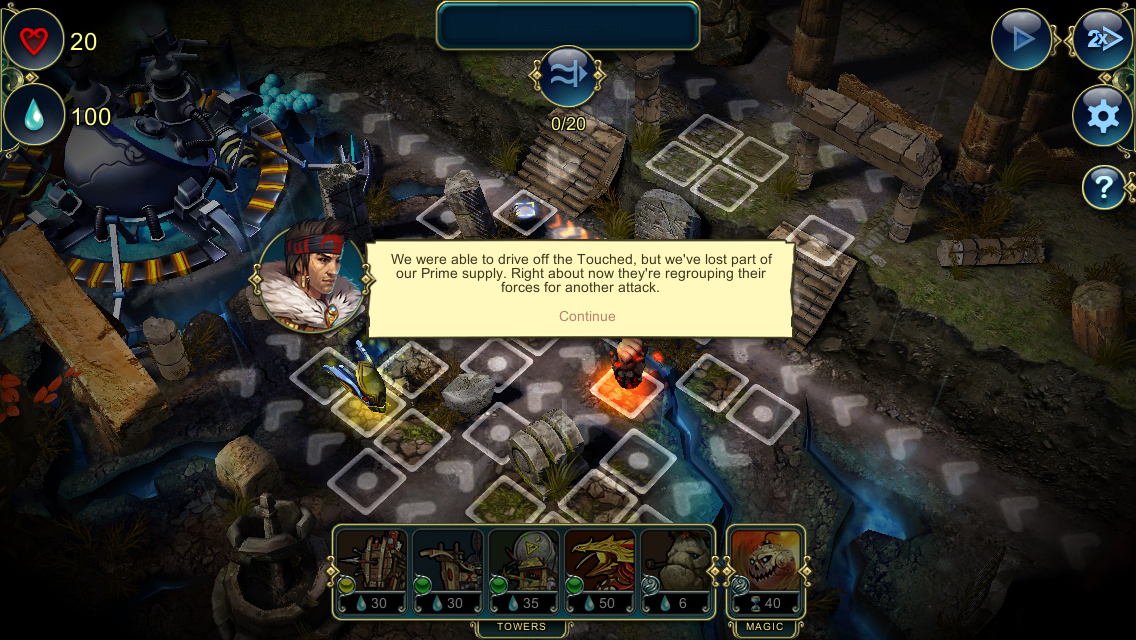 ‘Not particularly groundbreaking’ is a trend that follows a lot of aspects of Defenders. The card system is implemented well, but we’ve seen it before. The 3D visuals are certainly a strong suit, but it’s obvious that the game was designed for desktop as the tower placement grid can become confusing on smaller iOS devices. Native iOS gamers will notice that the game in general doesn’t control like a game designed for iOS, but it’s still playable nonetheless. Meanwhile, as mentioned earlier the actual TD mechanics are pretty barebones. This isn’t surprising as most TD games all play the same. However, the emphasis on grinding out cards means folks might get tired of the gameplay a bit quicker than other titles.

As a cohesive adventure, Prime World: Defenders is probably the most well-rounded tower defense game I’ve seen in awhile. Collecting tower cards is fun as always and there’s enough variety in terms of story and missions to keep you playing. It may not be the most original game in this day and age, but TD fans are familiar with such words. Suffice to say, if you are such a fan you owe it to yourself to check out Defenders.