Though I played my fair share of hockey in my youth, it may surprise you to find out that I am not a sportsman. I mean, unless downing an order of spice level 10 at the local curry restaurant counts as a sport now, but I suspect the Olympic Committee is going to give me a negative on that one. In spite of that, I really enjoy a variety of sports video games, even the ones based on sports I was never all that interested in before, like football and skateboarding. Looking at all of the sports out there, the biggest disparity in interest for me personally between watching/playing the real thing and indulging in the game version is with golf. I hope I don’t offend any golf fans out there when I say that, for me, it’s one of the most boring things around. Yet, for whatever reason, I love golf video games. From Golf on the NES to Links on the PC to Hot Shots Golf on PlayStation, I feel like I need to have at least one golf game on any gaming-capable hardware I own. Realism isn’t even that important, as long as I get that satisfying feeling that comes from hearing that ball go into the little cup.

Now, following one of the basic rules of the universe, we can surmise that if golf were somehow merged with space, it would be even better. Of course, Astro Golf ($3.99) isn’t the first game to hit on that brilliant idea, but its mix of mini-golf and space robots stands as solid evidence for how cool that concept is. The basic goal is the same as any golf game. You start at one end of a course, and at the other end is a hole that you need to get your ball to. In this case, however, your ball is a robot, and let me tell you, does that open up some sweet chances to cheat like crazy. You see, as you play, you’ll earn coins that you can spend on various upgrades for your robot that let you do things like jump, magnetize to the hole when you’re near it, or even reverse time, which is the fancy way of calling ‘mulligan’. To keep things somewhat sane, you can only have a limited number of these upgrades active at one time, so you’ll want to pick the right skills for the course at hand. 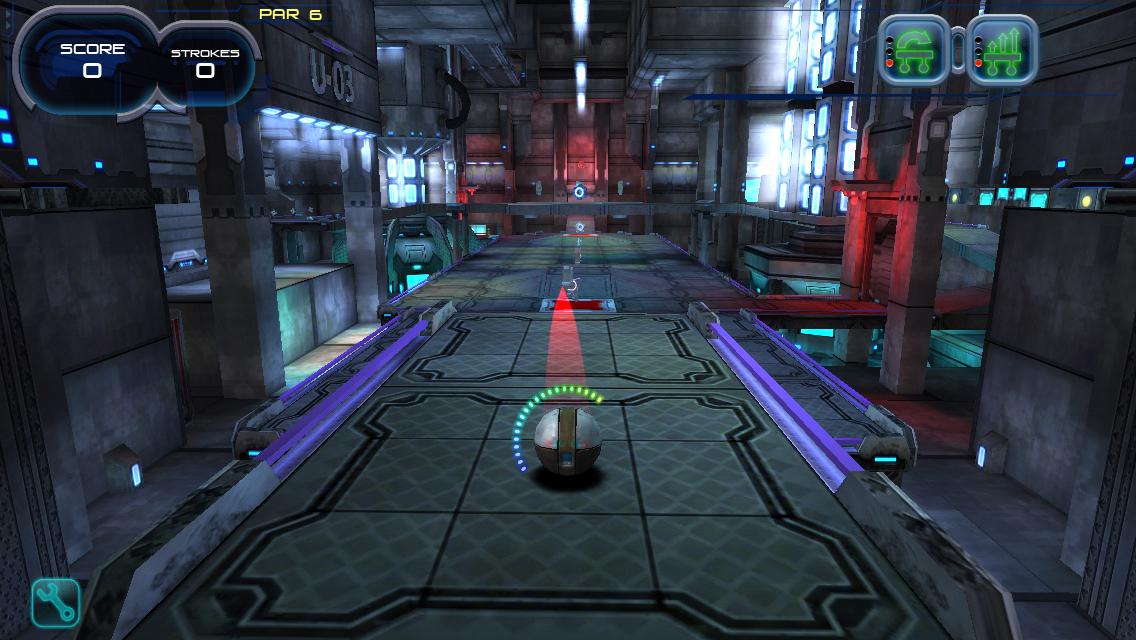 In total, there are 50 holes to play through, and while some games might be content to simply use a space theme as a skin, Astro Golf uses it as an excuse to load the courses up with all kinds of crazy obstacles. Not far into the game at all, you’ll start to run into things like black holes that fling you around wildly and maintenance robots waiting to whittle down your score with their guns. By this time, you’ve already had to deal with more standard video game mini-golf features like accelerator pads, jumps over open gaps, and door switches. The developers have also loaded up the courses with multiple paths and secret shortcuts for the observant. There are also bolts scattered around the course that give you bonus points and help light the way if you’re having trouble spotting a good path.

The course design is probably the biggest strength of this game. While the game starts off very straightforward and gentle, the courses quickly grow in complexity. The nice thing is that as the complexity of the courses increases, so do the number of ways you can potentially tackle them. You’re rewarded well for exploring. Not only can you find shortcuts that reduce the number of shots it takes you to reach the hole, helping you rack up a high score and earn more coins, but you can also discover secret bonus levels by exploring off the beaten path. This gives the game a bit of the feel of a platformer, something I haven’t personally felt in a golf game since Kirby’s Dream Course on the Super NES. Even once you’ve found the best route through a course, you can always try to find ways to maximize your score by taking advantage of hazards. 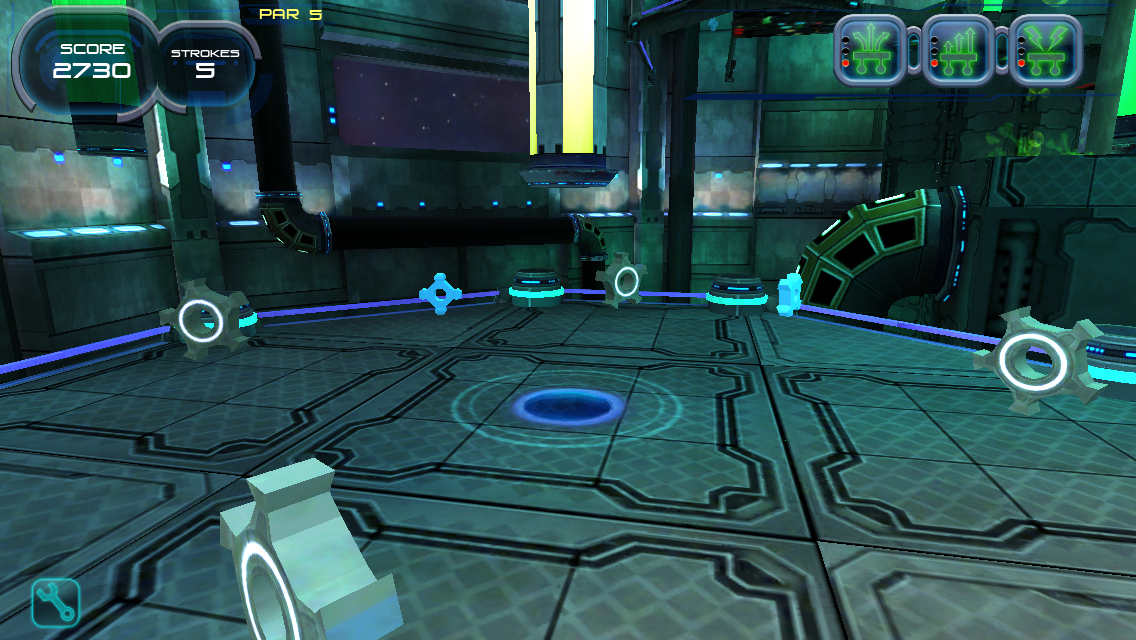 To clear a stage, you have to make it to the hole by a set number of shots. Upon clearing, you’ll be rewarded a medal based on your score, with each one giving you a corresponding number of coins as a prize. Every once in a while, you’ll unlock a new robot to use, offering more slots for skills and other special attributes. The game is quite generous with the coins, and combined with the limited number of skills you can have equipped at one time, you’ll probably never really feel pinched for cash. If you do want to speed things up, there’s an IAP for that, as well as an IAP to unlock an exclusive, very powerful robot. Of course, all the coins and ability slots in the world won’t help you if you aren’t good at the actual gameplay.

The controls of the game are simple enough. To take a shot, you simply touch your robot ball and slide back, which displays both an arrow pointing out the direction you’ll travel and a gauge showing your shot power. When you’re satisfied with both, simply remove your finger to shoot. Extra abilities like jumping are activated by tapping or swiping after you’ve shot. Before shooting, you can move the camera around simply by swiping left or right anywhere on the screen above or below your ball. It feels very intuitive, though you have to keep your finger steady when releasing your shot, because it’s very easy to accidentally change direction due to the sensitive controls. The camera is a bit of a bear at times, which can be irritating since the game keeps track of how long it takes you to finish a hole. Losing time fiddling around with the camera if you’ve shot yourself into a weird place can cost you time, points, and coins, and that’s not a very happy time for anyone. 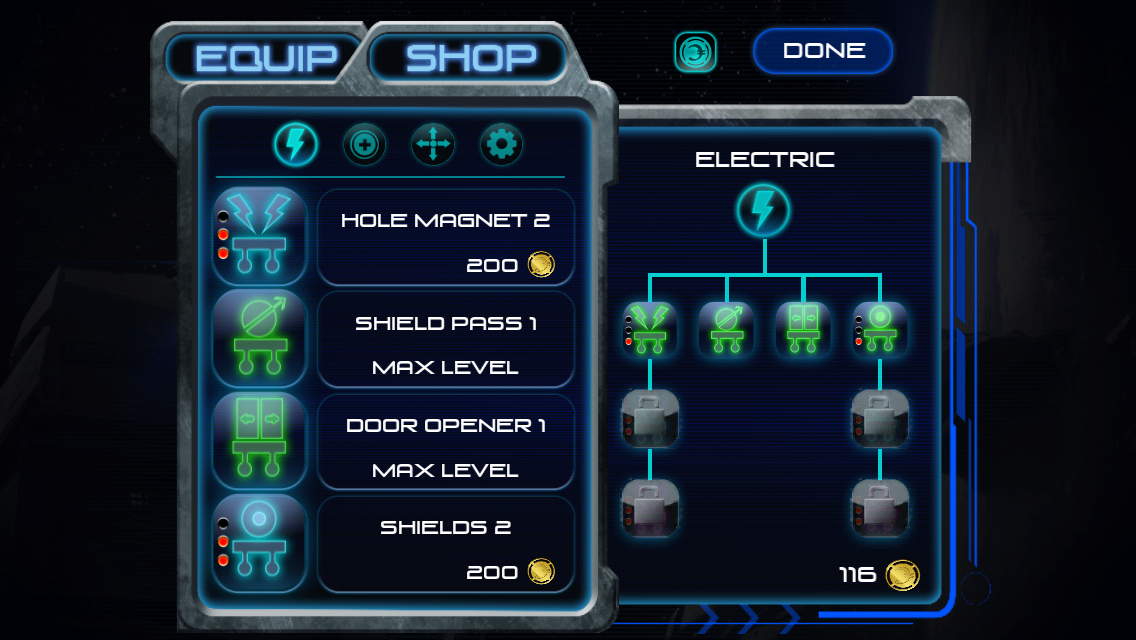 The game’s presentation is quite good, with sharp graphics, a mellow soundtrack, and appropriate sound effects. Although it fits the game well, I do wish the colors weren’t quite so sterile for most of the levels, but there’s no denying there are some pretty awesome sights to see in the game, and the complex visual designs of some of the courses are certainly something to appreciate. Astro Golf includes Game Center support, with a leaderboard that counts your total points, and a huge stack of achievements to unlock. The user interface is clean and pretty easy to figure out, though I do wish there was a way in the main menu to review the controls for all the extra abilities you can equip.

Astro Golf is a great-looking game with a cool space theme, interesting course designs, and some fun gameplay twists, but at its core, it’s still miniature golf. You’re still just putting a ball towards a hole one stroke at a time, no matter how many robots and gravitational distortions are scattered along the way. If you don’t like golf games, even with all the cool trimmings, you probably won’t get into this game. If, like me, you like to dig into a golf game here and there, you should probably check this one out. A lot of people in our forums are enjoying it, so make sure you swing around and read up on their impressions, too. It’s a high quality spin on the mini-golf genre with some really thoughtful twists.