There are many genres where people will debate the usefulness of touch controls, but one genre that is unequivocally better played on a touch-screen than a traditional controller is the strategy game. No surprise, then, that the App Store has a ton of great games in the genre, covering everyone from beginners to experts. One of the more prolific developers in this genre in the last few years is Hunted Cow Studios, who have mostly dedicated themselves to cranking out turn-based strategy games, starting with Tank Battle: 1944 ($2.99). Since then, they’ve covered a variety of wars in several times and places, including Rome and the American Civil War. Their latest release, Tank Battle: East Front, brings things back around to where they started, the European theater of World War 2.

The focus this time is on the many clashes between the Soviet forces and the Nazis, and as you would guess from the name, Tank Battle: East Front has its eyes squarely on the tank battles between the two, though a variety of non-tank units show up as well. The way Hunted Cow has set up this release is kind of interesting. While in the past, their games have been released as a single app with IAP campaigns available for a dollar apiece, East Front is divided up by year, with each IAP-free installment giving you two campaigns along with the same shared tutorial campaign. At the time of this review, Tank Battle: East Front 1941 ($1.99) and Tank Battle: East Front 1942 ($1.99) are available, but 1943, 1944, and 1945 are on the way in the coming weeks. You can actually launch the next game from within each installment if you have it on your device, so it feels like one big game apart from the fact that you’ve got a bunch of icons dedicated to it. 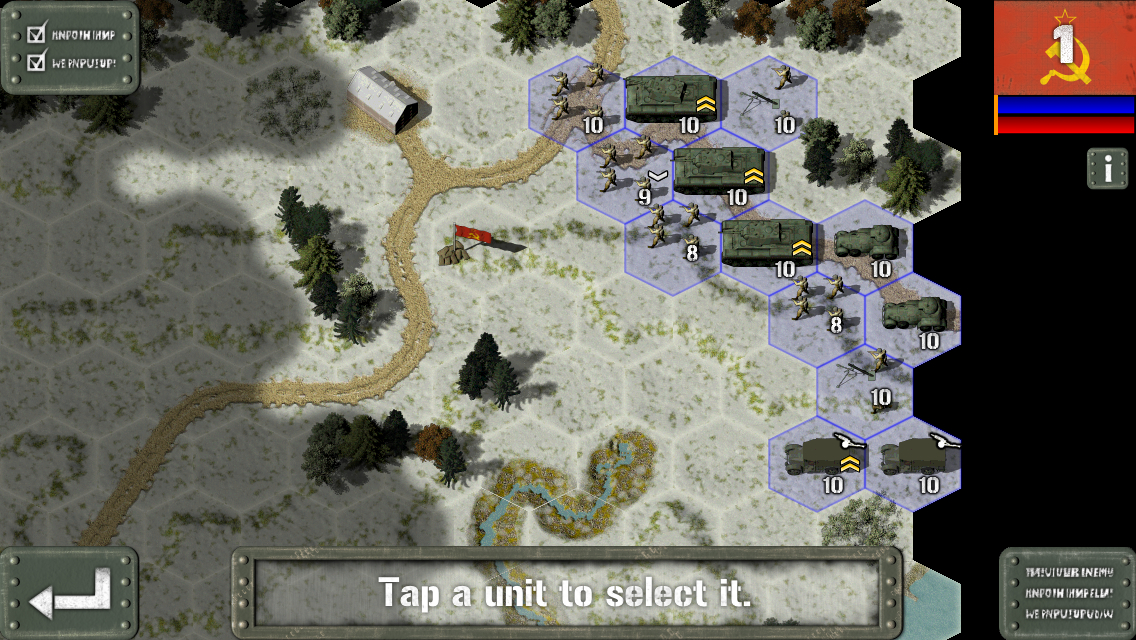 The tutorial campaign is the same in both installments so far, and I expect that will be the case all throughout. It offers seven missions, though only the last two have any substance to them, with the first five teaching you the basics of play. Each of the other campaigns offers eight missions, so with two campaigns, you’re looking at 16 missions in total per app. That might seem a little sparse, but the missions can get surprisingly complicated as you go along, so don’t be surprised if you end up spending hours working your way through the lot. There are also three difficulty settings available, with casual mode letting you just sort of roll through and enjoy the sensation of beating up on the other guys, normal mode showing some teeth and demanding a bit of strategy while still giving you room for mistakes, and hard mode giving you a pretty good kicking unless you play nigh-perfectly. There are also two extra missions in each that you can play with a second player via pass and play.

The thing I like about Hunted Cow’s strategy games is that they’re actually quite approachable for games of this genre. Coming from a largely console background as far as strategy games go, I find a lot of the sims with PC roots to be absolutely terrifying in terms of complexity. I admire them, to be sure, but I tend to get in over my head fast when I play them. Hunted Cow’s games, while using the hex grid calling card I immediately associate with hardcore PC sims, are actually pretty easy to get the hang of, and the difficulty settings are balanced well enough to satisfy a wide range of skill. There’s a lot going on behind the curtain, I’ve no doubt, but at a basic level, you’re really just moving your units around and telling them what to kill or protect. You don’t have to collect resources, build anything, or worry about anything outside of battle strategy. That might not be enough for some, but I find it very appealing. 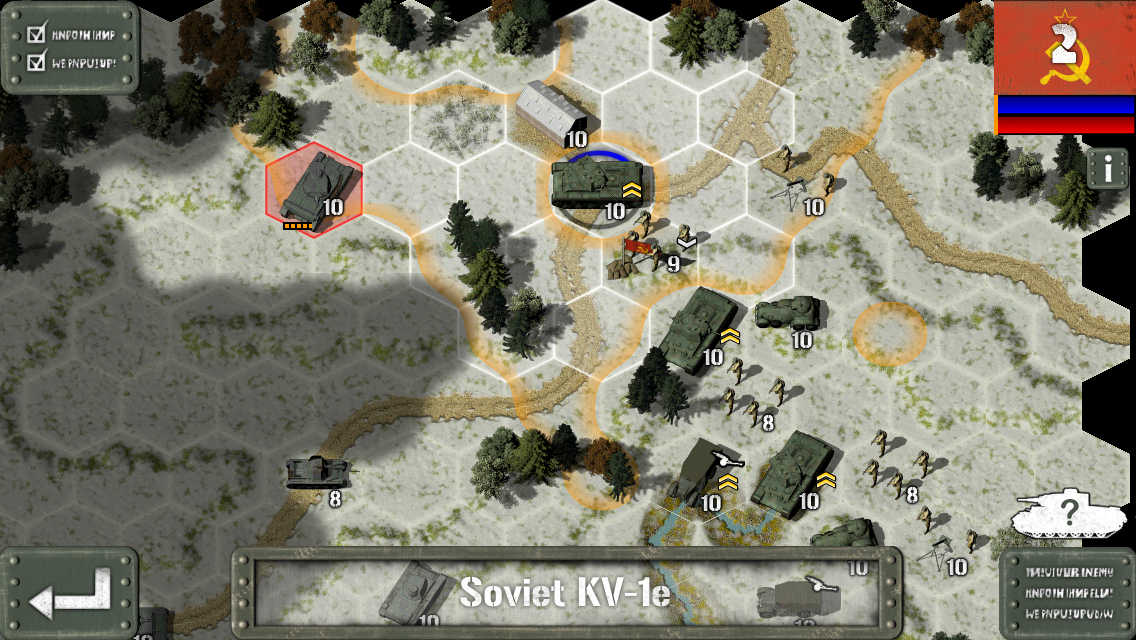 There are plenty of different units on the field, though the exact mix varies by year. Some can move and shoot, others fire from a distance, and some need to get up close and personal. It’s of course important to know your units well, something that’s easy to tell at a glance thanks to the excellent graphical designs. Beyond matching the right units against the right opponents, most of the strategy in the game comes from positioning. You’ll often need to take and hold checkpoints or protect weaker units from being destroyed, so where you position your units is vital. You also need to mind your flanks, since getting hit from the sides or rear will do a lot more damage than usual. Of course, you can take advantage of that yourself, and this is an important part of the offensive strategy on harder maps.

The maps themselves never get terribly big, so missions are pretty heated from start to finish most of the time. There are various types of terrain on each map that mostly affect how free units are to move around, along with granting defensive benefits. Although each mission gives you a little text to set up the situation, as far as I can tell, the game isn’t strictly adhering to any specific battles. It’s more trying to create a snapshot of the general situation at the time, particularly with regards to what equipment is available to each side. The mission objectives seem to reflect this, with the Russians very much starting on the defensive with the tide gradually turning over the course of the campaigns. The missions aren’t directly connected, so you’re free to pop in, do a mission, and pop out as you see fit. 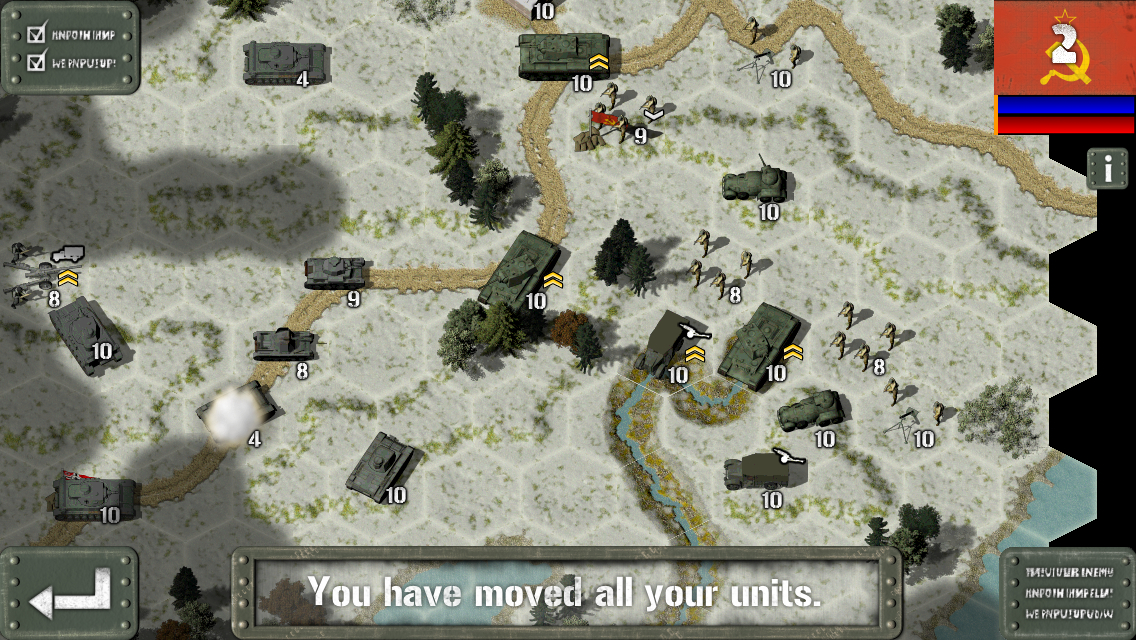 The battles themselves are turn-based affairs where you move all of your units, followed by an enemy phase where they do the same. You can tap the screen to speed up the computer’s turn, which is a nice feature. Moving units is simply a matter of tapping on them, which will highlight the spaces they can move to, and then tapping where you want them to go. When you tap a unit, it will also highlight any enemy units within attack range, and you can follow through with another tap on any of those to attack them. When a unit is highlighted, other buttons will pop up that will allow you to get more detailed information on the unit or use any special abilities it might have, such as unloading units from transports. Depending on the difficulty you’re playing and the specific mission, reinforcements will periodically arrive, along with valuable airstrikes you can use to hit any visible enemy on the map. At the end of a mission, you’re given a score based on your performance, with your total score for each campaign being tracked by the game. The game supports Game Center leaderboards, with a board for each campaign’s total score, giving you extra motivation to replay for the best score on each mission.

I do have a few gripes with Tank Battle: East Front, however. First, when you move a unit, it is moved without any extra confirmation and no taking it back. I wish there was some sort of confirmation, since I occasionally mistapped and sent a unit somewhere I really didn’t want them to go. Also connected to movement, I really don’t like how even though the direction your unit is facing is of vital strategic importance, you have no direct control over where you’re facing. It would be great if I could choose the direction my unit is facing after moving, like in Final Fantasy Tactics ($13.99). I mean, feel free to restrict it a bit for the sake of realism, I understand these are tanks, after all, but it shouldn’t be so hard to make use of such an important part of the game’s strategy. It also bears mentioning that the game is very much an iteration on Hunted Cow’s previous strategy games. There isn’t a lot new to the core gameplay here, so if you’ve had your fill in a prior game, you probably won’t have your mind changed by this one. 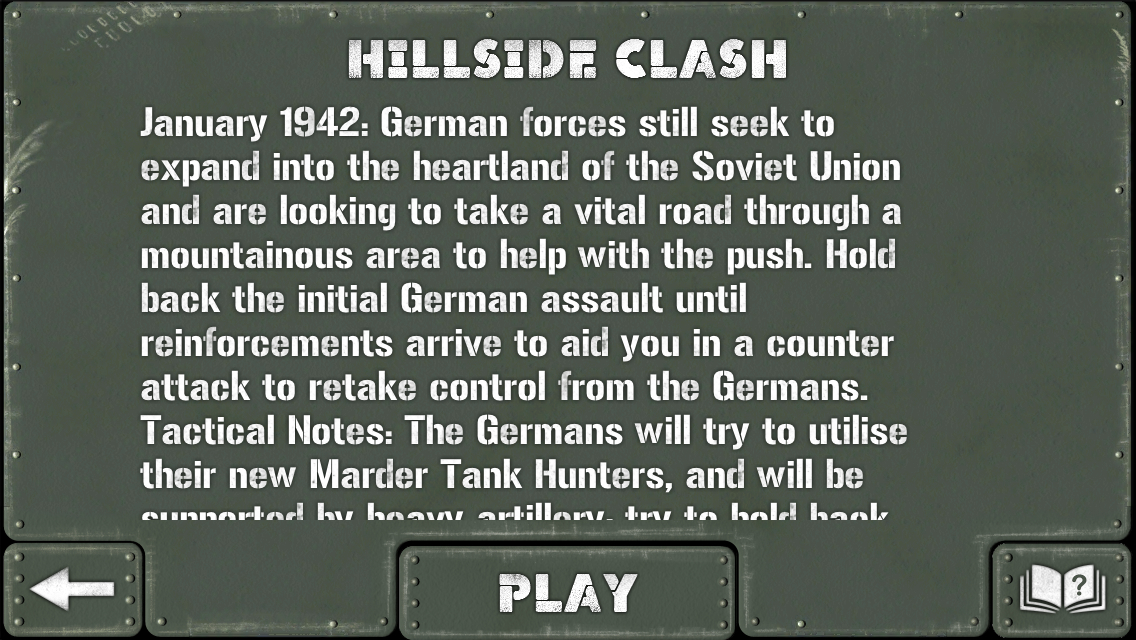 As for me, I haven’t had my fill of Hunted Cow’s stuff yet by any stretch. They hit a nice sweet spot between approachable and deep, making me feel like I’m wearing some big-boy grognard pants over my Advance Wars underoos. The nice thing about a focus on refinement is that each game gets better and better, and Tank Battle: East Front demonstrates the fruits of those efforts quite nicely. If you’re into strategy games, I recommend picking 1941 up and seeing how you like it. It’s a good value, and if your thirst isn’t quenched by the end, you can move into the other installments until you’re satisfied.