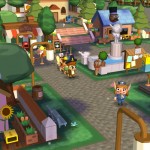 We’ve been pretty dedicated with our various game of the week choices over the months since we’ve started the column, but we’re doing something a little different this week since 98% of our attention went towards games we saw at GDC. So, here’s the Game of GDC. Weirder yet, since most of the games we’ve seen are either works in progress or prototypes, we’ve decided what we’re shooting for with this nomination is the game that seems the most promising to be really radical when it’s finally released.

The clear winner seems to be Hand Circus’s Seabeard. First off, I’ve always considered Simon Oliver to be a legendary game developer on iOS. He was instrumental in the early days of iOS in the transition to iPhone games instead of games that happen to run on the iPhone. It’s an important distinction that anyone who was around in the beginning of the App Store will remember. Rolando didn’t rely on D-Pads or virtual buttons, and instead just felt like it totally belonged, and could only exist on the platform.

Somewhat similarly, Seabeard feels like a very special miniature world in your pocket. Instead of developing a very stereotypical free to play gravy train game, they’ve built a insanely captivating universe complete with real-world time integration and so many things you can do inside of it that we weren’t really sure to make of the launch trailer. It’s free, but it doesn’t seem like it matters, as Simon has made it very clear that he doesn’t want any sort of pay walls. Additionally, they’re hooked up with Backflip, and all of their pay models have been totally agreeable.

In a meeting at GDC, Simon Oliver gave us a complete walkthrough of the basics of the game, and I can’t wait to play it. It seems like it’s got all the hooks of Animal Crossing, with more. Since they’re building the game with the intention that you can play it forever, you’re never going to run out of things to do like you sort of do in Animal Crossing once you’ve fully tricked out your house.

We’ve seen a lot of great things this week, but the game we’re most excited for, without a doubt, is Seabeard.