I always enjoy it when a sequel makes a strong effort to surpass its predecessor without losing the core concepts that worked in the first place. Bloo Kid ($1.99), released in 2011, was a vaguely Bubble Bobble-like single screen platformer where you had to clear the screen of enemies by bouncing on their heads to finish each stage. The controls were pretty decent, the graphics were colorful and cute, and there were 84 stages with a few goals on each, so if you enjoyed it, there was a fair bit to chew on. That said, single screen platformers, while enjoyable, were knocked nearly into extinction when Super Mario Bros. first came around, approximately 25 years or so before Bloo Kid tried to get some attention with a fairly rote take on the concept. When Bloo Kid 2 (Free) popped up on my radar, I assumed that like many sequels, this was going to be little more than a level pack with a few new things stapled on at best.

Much to my surprise, this game is actually a scrolling platformer with reasonably-sized levels, tons of things to collect and do, and a few gameplay ideas that take it beyond the basic hop ‘n’ bop of the original game. In the original game, Bloo Kid’s girlfriend, Pink Girl, was kidnapped by the bad guys, and Bloo had to rescue her. I can only assume the ending was extremely happy for Bloo Kid, because this time, it’s not Bloo’s girlfriend who gets nabbed, but rather their baby, Pink Kid. Not bad, Bloo. Ol’ Mario can’t get much more than a kiss on the nose and a slice of cake for his troubles. Rather than having to destroy all the enemies in a stage to move on to the next one, this time it’s more of a traditional “walk to the right to find the exit" affair. The initial batch of stages numbers 27 spread across three different worlds, certainly fewer than the first game, but more than made up for by the fact that they aren’t single screens. 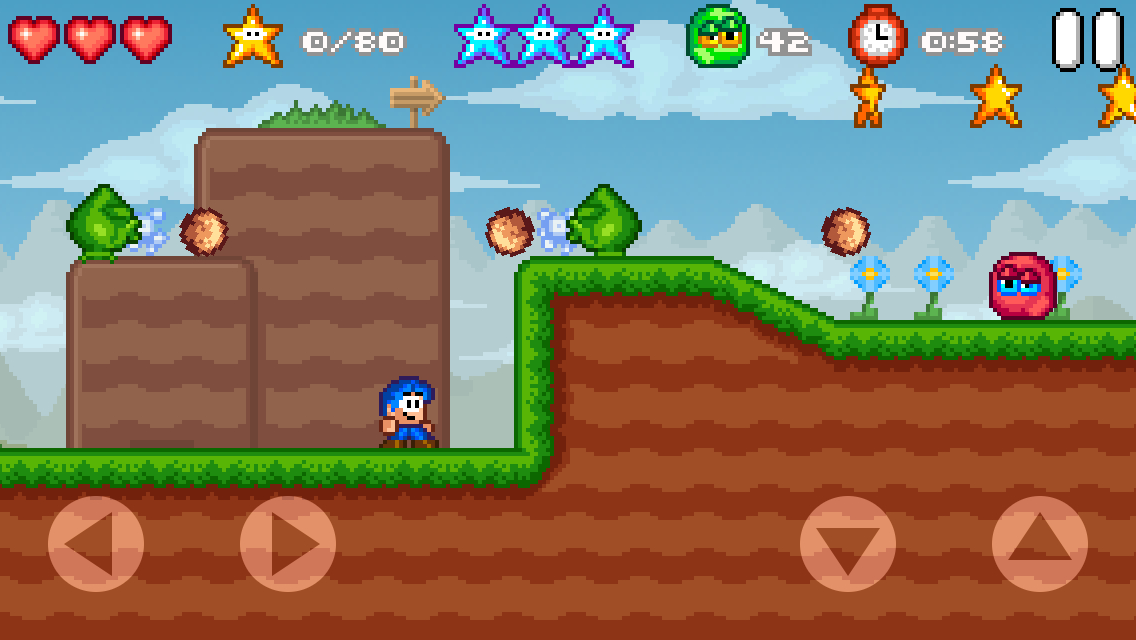 Before I get too deep into this, I want to talk about the cost of the game first. Bloo Kid 2 is, in theory, free. However, between levels, there are some awful mandatory video ads. They are the worst kind of ads. These can be removed by paying two dollars, and if you are interested in this game, I encourage you to do so, because I can’t imagine dealing with those ads through the course of an entire playthrough. This is the only IAP in the game. Now, back to your regularly scheduled review.

Bloo Kid 2 doesn’t try to cover any new or clever ground for the genre. Bloo can walk around, jump and double-jump, swim, and fall down through certain platforms, and that is the extent of his arsenal. In some levels, you can find a fire power-up that works like an invincibility star, giving you a short period of baddie-wrecking power. Other pick-ups include hearts, which restore any lost life from Bloo’s four-hit life bar, and stars, which are simply a collectible. Simply reaching the end of a stage is enough to unlock the next one, but each goal also has several extra goals you can complete to earn stars. The first game’s mechanic of clearing the stage of enemies returns as one of these, along with finding every regular star, finding all three hidden blue stars, grabbing a quick-to-disappear balloon near the end of the stage, finishing the level without any missing hearts on your life bar, and reaching the goal in a set period of time. These extra goals give some replay value to what can be a fairly short dash if you intend to directly march to the end of each stage.

The stages are fairly well designed, with lots of vertical elements and occasional alternate paths, but unlike, say, Ava’s Quest ($0.99), you can pretty much count on the correct route involving simply going right at every opportunity. There are many types of enemies, each with its own distinctive behavior, and the game isn’t shy about combining them to create more difficult hazards. Thanks to the double-jump, generous life bar, and fairly frequent health pick-ups, Bloo Kid 2 isn’t that hard to finish on normal difficulty, though some of the sub-goals can stretch you thin in certain levels. The game also offers easy and hard difficulties if normal doesn’t fit you right, and with three save files, you can keep a file for each difficulty if you like.

The time limits, particularly on hard difficulty, often require you to learn where a few secret shortcuts are if you’re going to make it in time, and catching the balloon also frequently requires a bit of planning. You’ll often need to bounce off an enemy to reach certain areas or stars, and if you’ve already taken out the enemy needed for it, you’ll won’t be able to complete that sub-goal. Basically, what I’m saying is that Bloo Kid 2 isn’t a game where you can just run through and get everything on your first try unless you have some uncanny instincts. You’ll have to revisit the levels if you want to finish everything up. This aspect goes a long way towards extending the game’s playtime. 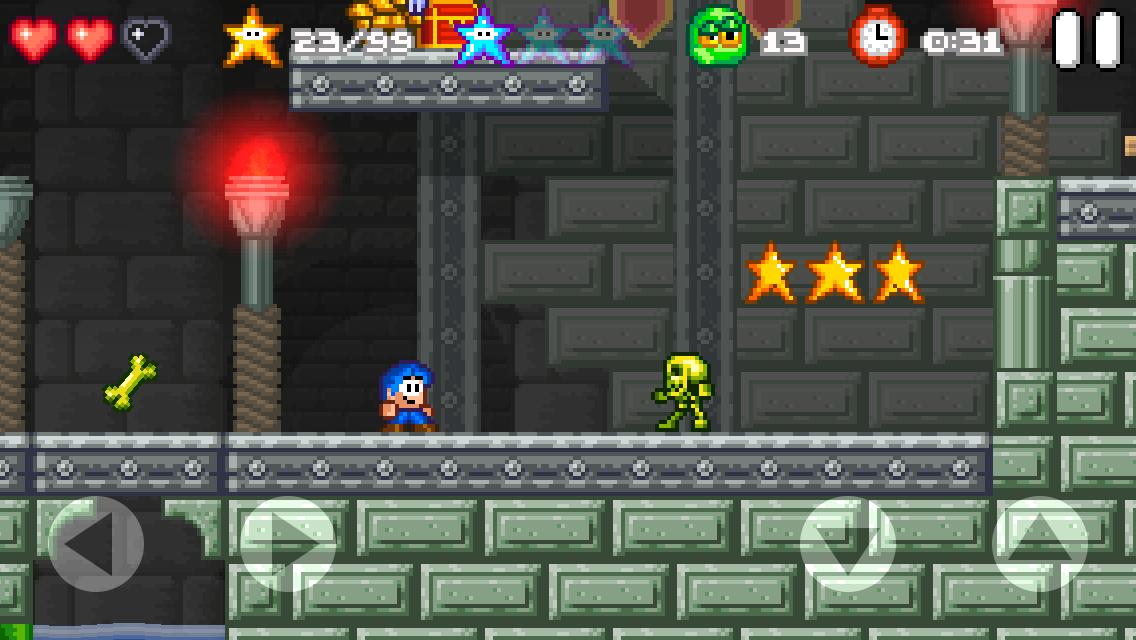 For his part, Bloo controls well. Virtual controls are used to move left and right, jump, and pass down through the floor, and I never had any problems to speak of getting the character to do what I wanted him to. You can move the controls around in the options if you like, so even if things somehow aren’t working for you initially, you can probably find a set-up that works nicely. Bloo’s physics are easy enough to get used to, though I found that enemy hits lacked impact. Many times, I didn’t even notice I’d been hit until I looked up and saw a heart missing. I guess he’s just got a high tolerance for pain. You have to be careful of that, though, especially underwater where the margin between bopping and being bopped is slightly less obvious.

Like the first game, the graphics are beautiful and colorful, done up in a style reminiscent of 16-bit games, especially Taito’s games of that period. The bosses look really great, although the first boss is a bit familiar somehow, as are a few of the other enemies. Inspiration can strike in many ways, I suppose. The enemies that reappear from the first game have had their sprites refined, giving the game a much more cohesive and professional look. I’m kind of mixed on the music. There are a handful of tracks that play throughout the game, and some of them have really strong melodies to them that will stick in your brain well after you stop playing. They’re a bit overproduced in parts, though, making sections of them sound more noisy than they should. 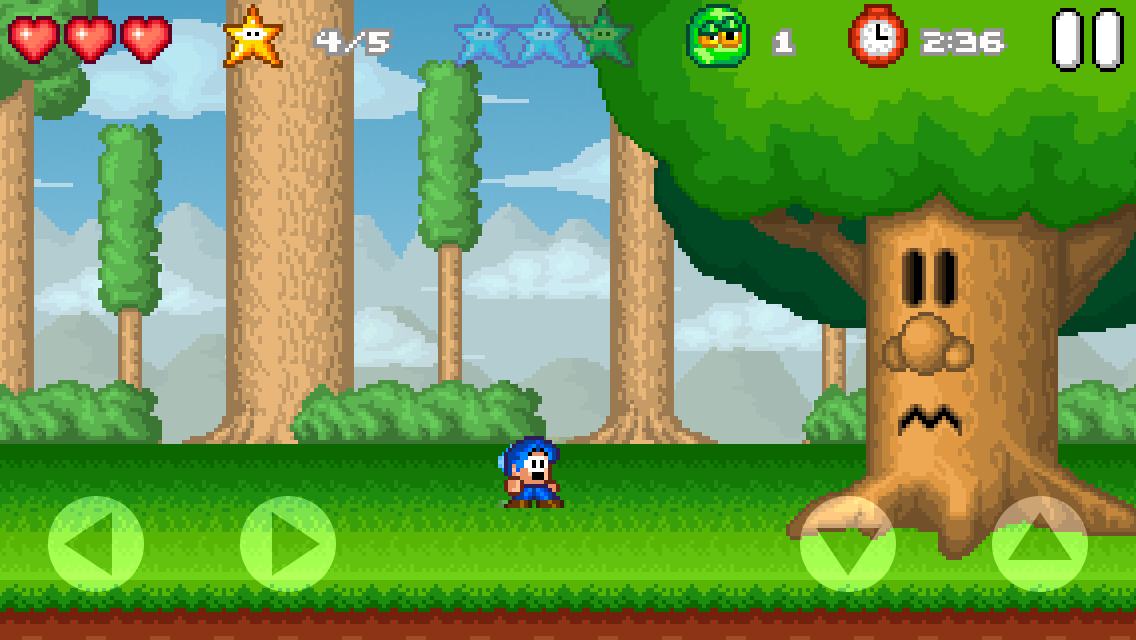 Game Center support is in both for leaderboards, which track how many stars you’ve earned for each difficulty, and a good, if not overly interesting, list of achievements. I would love to see some leaderboards added for clear times, because I think the level design and game play is positively ripe for speedrunning. None of the achievements involve grinding beyond simply clearing the game, and several of them are genuine tests of skill, so I’m pretty happy with the list, generally speaking. It’s solid, even if it’s lacking any unique ideas.

That describes Bloo Kid 2 quite well on the whole, actually. It’s hard to find any serious weak points in the game, and it’s leagues beyond the first game. At the same time, it doesn’t offer anything to make it stand out from the pack, aside from being a well-put together example of the genre. Sort of a ham-and-cheese sandwich platformer, so to speak. As such, it’s pretty easy to figure out if the game is for you. Do you hunger for something more interesting than the same old packed-lunch jump and collect game? If so, then you’ll want to pass on Bloo Kid 2. Looking for a familiar taste to tide you over until something more exotic comes along? Then Bloo’s your boy.