A few years ago, Foursaken Media released Bug Heroes (Free), an awesome hybrid of castle defense and twin stick shooting with a healthy dose of RPG mechanics sprinkled in. What could have turned out to be an overly ambitious idea instead ended up just right, offering players tons of content with great core mechanics. Given how well it went over with iOS gamers, it was probably inevitable that we would one day be talking about the sequel, and here we are. Bug Heroes 2 ($1.99) is an excellent follow-up to the first game, maintaining the same basic elements that made the first game work so well and adding a few twists, all while piling a giant heap of new content on top and giving the whole thing a beautiful shine. The end result is just about everything a fan could want out of a sequel.

Bug Heroes 2 is, like the first game, a combination of a castle defense game and a third person shooter, with some RPG elements in the form of character progression. Basically, you choose two bugs to take into battle, where you’ll need to accomplish various goals and protect your base from incoming enemy bugs. The line-up of playable pests has more than doubled from the first game, and as before, each of them has their own unique advantages and disadvantages. Since you can bring in a team of two to each battle, there are tons of combinations to put together to cover a variety of playstyles, and you’ll need to investigate many of them to find the right duo for each mission. Clearing a mission will net you some diamonds and stars, which can be used to unlock new characters and upgrade your existing ones. 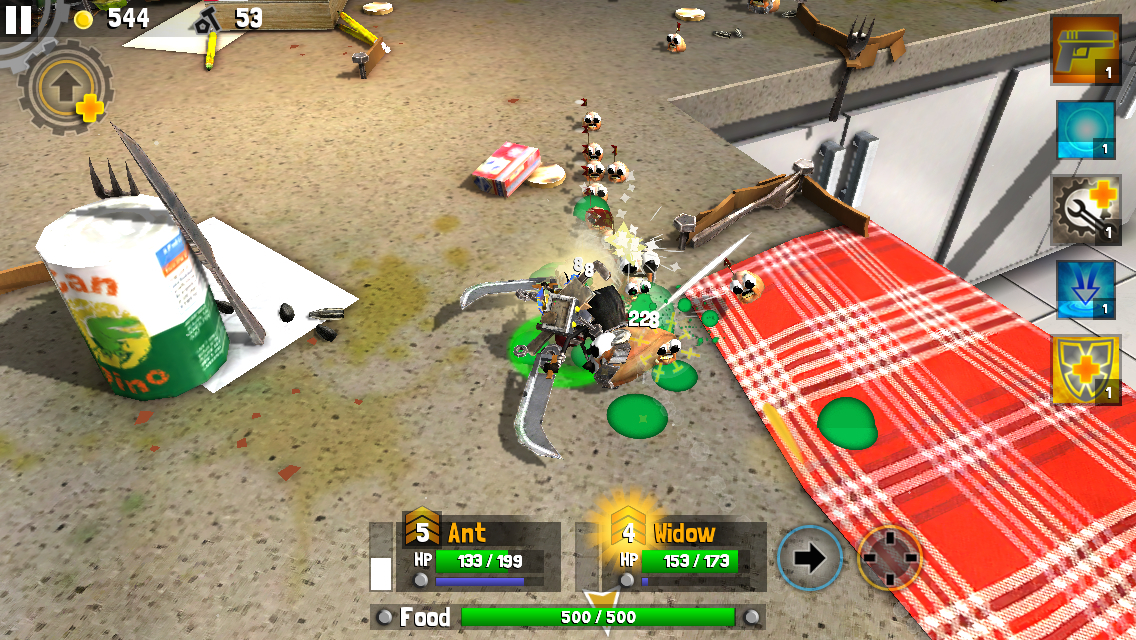 Perhaps it’s a bit of a downer, but I’m going to start by listing every way this game does not exceed its predecessor. First of all, there are no story elements in this installment. Secondly, heroes have a more linear progression than they did in the first game. You don’t get as much customization in terms of their stats, so you need to play them as the types they were designed to be. The twin stick shooting aspect of the first game is out in favor of an auto-attack (which can be toggled off in the options) if any enemies are in your character’s line of sight. At the moment, there are only three maps compared to the first game’s nine.

Okay, now that that’s over with, let me tell you how this game kicks thorax. The same hook that made the first game so great is still present here. You need to balance defending your base with going out into the maps searching for food and parts to fortify your defense and keep your characters healthy. As the battle wears on, you’ll earn coins that you can use for a variety of upgrades that only last for that stage. You can’t bring them with you, so you can spend pretty freely on creating the most powerful stuff you want. Bug Heroes 2 takes this basic hook and expands on it greatly. Coins are pretty much only used to strengthen your heroes now, and you’ll need to venture out and find parts to upgrade your base. You’ll have to venture out for other reasons, too, such as destroying enemy spawn points or securing a strategic point with a tower you can build a turret on. The frantic balance between staying at home and venturing out was one of the most memorable things about Bug Heroes, and the sequel keeps that going. 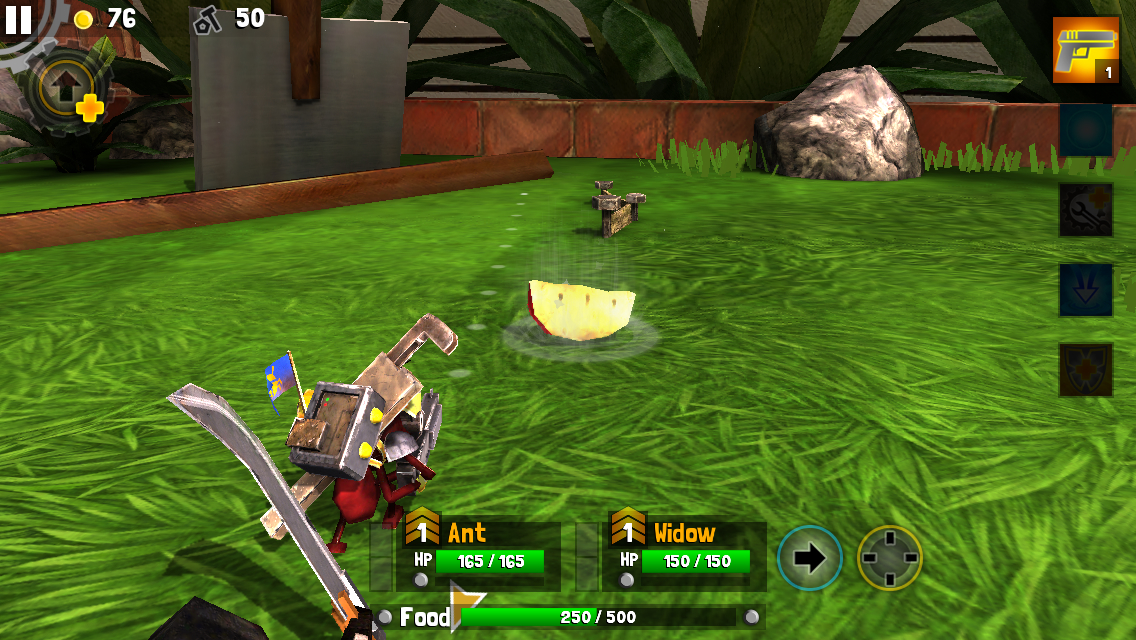 There are some great new twists that add a lot to the strategy, however. First and foremost, instead of controlling one character at a time and switching them out for another at your leisure, in this game, you’ll have two characters participating in battle at any given time. They can’t be swapped out once the battle has started, but you can freely switch which one of them you’re controlling. The addition of this second character is pretty big, since you can now be in two places at once if you want. Maybe you want to stick together, though, complementing the skills and weaknesses of allies? Your control over the non-active character is limited but functional. You can tell them to stay put or ask them to follow you again. It might not seem like much, but this gives you the option of, say, leaving a good long-ranged attacker at a strategic point near the base as a makeshift turret while you take your speedy melee character out to hunt for goods.

Another new element is the camera control. You have your choice of two different angles on the action, and they both have their uses. There’s a more overhead view that gives you more of the picture around you, and a behind-the-back view useful for lining up shots and seeing into the distance. You can switch between them at the push of a button, and you’ll want to do so depending on what you’re up to. The overhead view is definitely the way to go when you’re hunting for food and parts, while the behind-the-back view is certainly useful for lining up shots with ranged attackers. 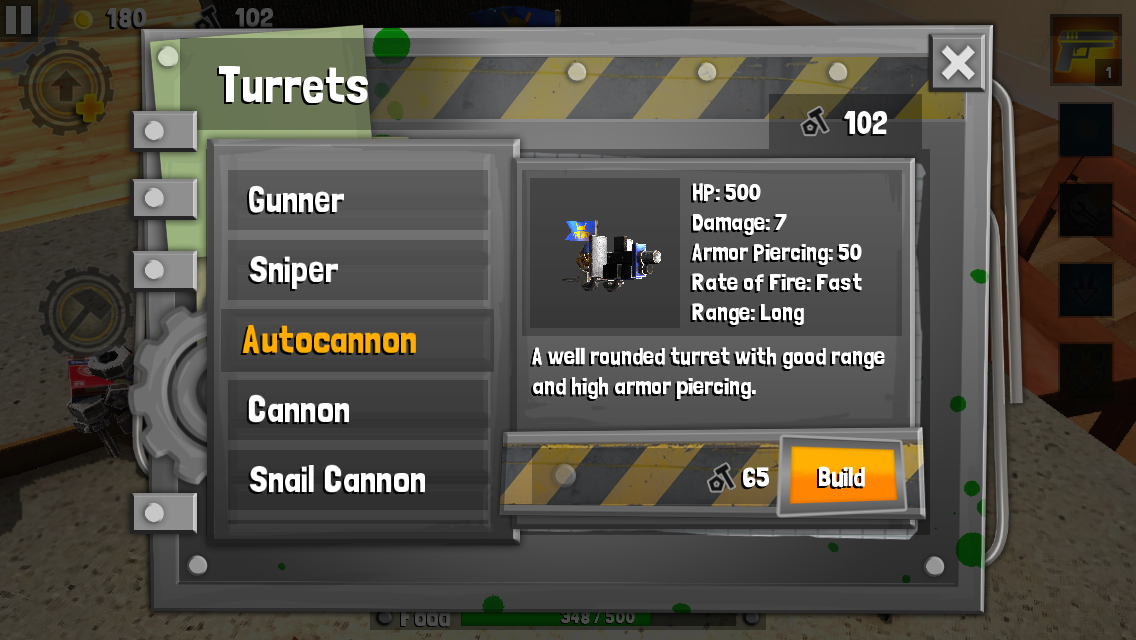 As I mentioned earlier, clearing stages will earn you stars and diamonds. Your participating heroes will also earn mastery points after each battle, leading to level-ups that make them even stronger. Diamonds are ostensibly the game’s premium currency and can be bought with real money, but the game doles them out very generously. When you start the game, you’ll get two random bugs to start off with. You can buy others using diamonds, or just earn them randomly when you reach a certain amount of stars. Diamonds can also be used to buy scrolls, which are modifying items you can attach to your characters that will change some stats for the better or worse, effectively slightly rebalancing them. The stars are used for buying permanent upgrades that apply to all of your insect army, including things like offensive boosts and HP upgrades.

I’m not sure I’ve played many games that are as generous with the premium currency as this one. Even if you weren’t unlocking characters by playing through the missions and earning stars, you’d still be able to afford to buy one outright after an hour or so of play. That might sound like a long time, but an hour passes very quickly while playing this game. If you really want to speed things up, though, or have your eye on a particular one, one dollar will buy you enough diamonds to take your pick of the non-legendary heroes. I recommend Bumblebee. Unlike certain Bumblebees, he won’t be called on to change Optimus’s oil anytime soon. 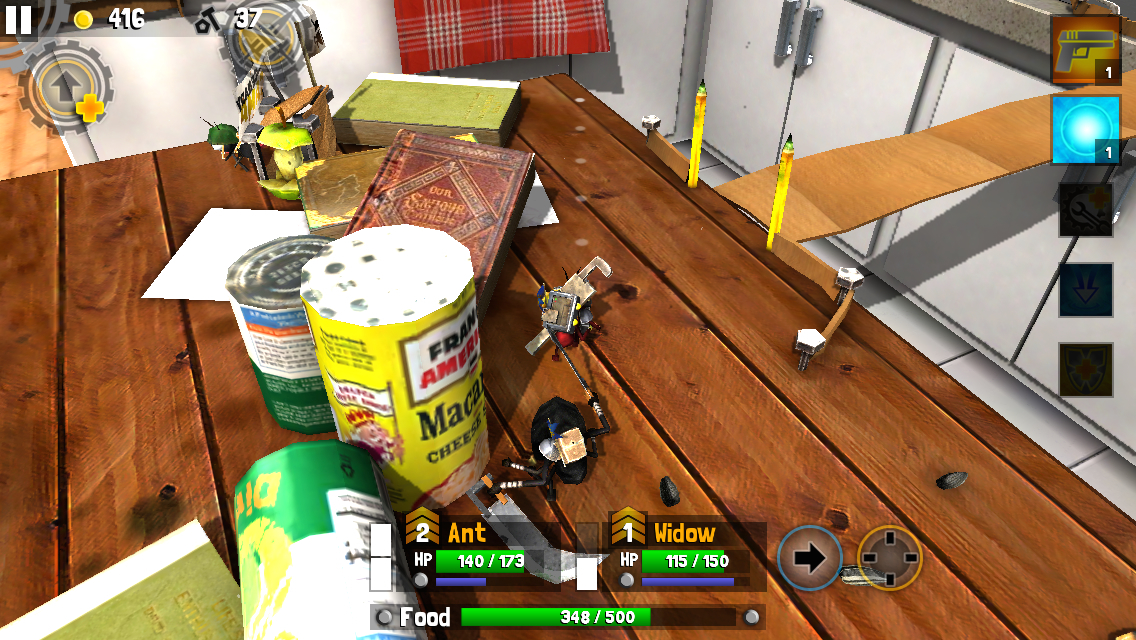 In the single-player mode, in addition to the tons of missions available, you can also play an endless survival mode where, true to the name, endless waves of enemies come at you in increasing numbers; and a skirmish mode, where you face off against a computer opponent in a straight-up battle to the finish. Of course, it’s not all single-player fun in Bug Heroes 2. You can also play multiplayer online, with a co-op mode available for the endless mode and a one-on-one and two-on-two mode available for the skirmish mode. Multiplayer works very well, and the huge variety of heroes to choose from leads to matches feeling a bit different every time.

Bug Heroes 2 also buzzes past its predecessor in presentation, with some genuinely gorgeous graphical details and environments with far greater detail than anything seen in the first game. Things do sometimes crawl when the screen gets packed with enemies in later missions or the endless mode, especially in multiplayer, but for the most part, the game runs pretty smoothly on recent hardware. The bugs once again speak in high-pitched voices, with lots of little comments they’ll throw out now and then. It’s sometimes hard to catch what they’re saying amidst the carnage, but there are a lot of deliciously punny one-liners. The rest of the sound effects are pretty standard fare, with the gunshots, explosions, and attacks all delivering satisfying impact. The music isn’t terribly memorable, with some typical military-style tunes serving most of the duties. It fits decently enough.

I could probably go on and on, but I think you get the point. Bug Heroes 2 is an awesome sequel to a great game, upping the ante in almost every respect, and delivering an amazing value for its price. You could get hours of fun out of any single mode from the game. Taken together, it’s a game that shouldn’t be missed if you have even a mild interest in defense games, third person shooters, or strategy games. People in our forums absolutely love it, and you should definitely check the thread out for extra impressions and tons of great strategy from our members. On top of all of that, Foursaken Media are usually awesome about adding content after the fact, so I’m sure we can all expect this excellent game to get even better as time goes on.