The word game is one of those genres that’s basically always active on iOS, with new entries released at a fairly regular pace. That said, recently, there seems to be a higher amount than usual of excellent new games twisting RPG mechanics into the genre. They’re two great tastes that taste great together, I suppose. What’s interesting to me is how games coming from the same basic angle of “word game plus RPG" can have such different results. If we consider the recent Spell Quest (Free) to be the Dragon Quest of word RPGs, with its slow, deliberate pace and focus on carefully-planned strategy, then Word Mage ($0.99) is the Ys of the genre, moving at a blazing pace and demanding quick reactions to enemies that become increasingly dedicated to finishing you off.

Like Spell Quest, Word Mage is a stage-based word game with an assortment of monsters to fight by spelling out words from a grid of letters and three stars to collect on each stage. Your character will level up as you defeat monsters, and you can pick up upgrades and new abilities to assist you. That’s about as much as the two games have in common. While Spell Quest lets you take your time and find the best word you possibly can, choosing any letters you like in any order from the grid, you’ll get no such luxury from Word Mage. There’s a timer, and that timer is your health. If it drops to zero, you fail the stage. By default, it is ticking down, something you can only halt by successfully attacking the enemy. The letters you use to spell your word must be connected, and the letters you start with are the ones you have to work with for the whole stage. 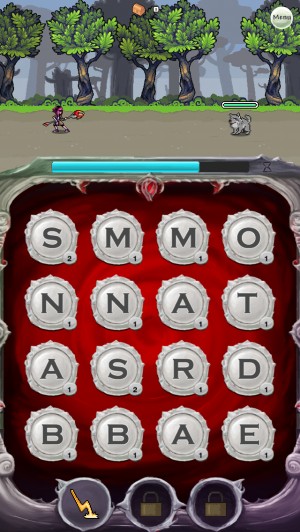 Adding to the challenge is the fact that you cannot use the same word twice, so you have to find more and more words from the same pool of letters if you want to win. You are allowed to make two-letter words, which often is not the case with this genre, but it’s still surprisingly challenging to keep coming up with words in some cases. Lest you think the RNG gods pulled a fast one on you, when a stage finishes, successful or not, you can see a complete list of the possible words you could have spelled. I always like having a readily-available reason to kick myself. You know, besides looking at pictures of myself from high school.

Wait, though, there’s more. Not only is that timer constantly ticking down while you anxiously try to pick out a word you haven’t already used, but the enemies will also counter-attack in their own ways. Every once in a while, they hit you, draining a bit more of your timer bar, but worst of all are the ones who bring status effects to the party. You can get whammied with a bunch of different effects, including (but not limited to) one that drains some of your timer for incorrect words, one that reduces your normally 16-letter grid to a mere 9-letter grid, and others that limit the length of words you can use. Bosses and strong enemies will sometimes use more than one of these at once, creating some very tense battles. It’s not too hard to progress through levels on one-star difficulty, but to earn two or three stars, you’ll have to crank up the difficulty, which affects, I think, the damage that enemies do and how fast your timer drains. Unless you’re way overleveled, three-star difficulty can be very, very hard, and even overleveled, the wrong combination of status effects can still potentially ruin your day.

Every enemy you kill, even if you don’t clear the stage, gives you experience points. When you get enough, you’ll gain a level, improving your stats and allowing you to choose a letter whose point value you’d like to increase. This is the most straight-forward way of powering yourself up, but it’s not the only way. You can also unlock new powers and upgrades, but for the most part, you can’t just do a straight exchange of money for these. Instead, you’ll have to gather all of the ingredients for the recipe. It’s easy to see which enemies might drop what you need simply by tapping on that item in the recipe. Enemies drop stuff pretty regularly, so you’ll soon amass quite a little collection. 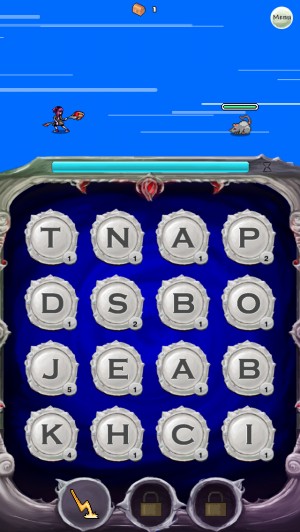 Your backpack has limited space, however, so sooner or later you’ll have to start selling things off, unless you have enough money to buy a bigger backpack. By money, I mean the in-game currency of gold or the real-life currency of a dollar. It takes quite a bit of gold to buy a bigger bag, so if you don’t want to spring for any IAP, you’ll have to learn to live light and only keep the items needed for a specific upgrade or two until you’ve gathered them all. Some of the upgrades are necessary to progress through the game, while others are merely incredibly useful, like the different spells you can bring into battle.

There are 29 stages in total, which would probably go fairly quickly if you could just dash through them on easy difficulty, but you’ll hit a level wall sooner or later where you probably won’t be able to progress without doing a little grinding. If you’re clearing out each stage fully as you go, you shouldn’t have too much of a problem with your levels. I felt the game was of pretty good length, and with so many different monster types and the somewhat random nature of their appearance and the letters you start with, there’s a lot of replay value here. There’s a short list of mostly tough Game Center achievements but unfortunately no leaderboards.

The graphics are simple but sharp, with lots of bright colors. The sprites are really small, but everything stands out as well as it should and the monsters have a lot of personality in their designs. The stage selection screen actually presents you with a nice 8-bit style overworld map, which is a minor touch that nevertheless helps you feel like you’re on a journey. The music is fairly standard fantasy fare. It doesn’t really stand out much, positively or negatively. The letters themselves are presented clearly, which is the most important thing for the visuals to convey. The UI is generally good, but I wish the pause button was a bit more accessible. It’s a bit too small and far away from the play area to be useful in a fast-paced game like this.

I really enjoy the high-pressure spin Word Mage puts on the genre. This game is seriously frantic at times, forcing you seek out and spell words very quickly, which is a task I can’t imagine too many people’s brains are accustomed to. It gives the game its own hook to separate it from a pretty large pack. It’s already got a pretty good following in our forums, so head on over to the thread if you want some other impressions. The challenging, speed-focused gameplay more than earns this one a spot on the device of any word game fan, without a doubt.