If you like hacking away at something using a sharpened piece of metal with a handle, you are probably a very happy camper with your mobile device. Perhaps you even think you have all the slice ‘n’ dice games a person could ever want. I’d like to humbly offer at least one more example for all the up and coming sword-fighters out there, however. Only One (Free) is a pretty fresh take on a genre almost as old as the medium, and it does so without any fancy motion controls or specular lighting. Pick up your sword and get ready for a serious test of your skills, because you are the Only One who can survive. Well, you and, I guess, all the other people who play the game and get good enough at it to win. Probably the Only One Thousand?

Well, that’s not really important. What is important is that you find yourself in a circular arena with nothing but a fatal drop surrounding you on all sides. In the middle of the arena is a sword, waiting to be claimed. Once you do, you’ll start facing increasingly large waves of enemies, intent on separating you from the mortal coil. Don’t worry, though, you’re awesome. Or at least, you will be, in time. When you start off, all you can really do to defend yourself is run around and take swings at the enemies. Whenever you kill an enemy, they’ll drop an assortment of goodies, including health pick-ups and, most importantly, power. That is, unless you drop them off the side of the field. You don’t get anything but points if you do that. 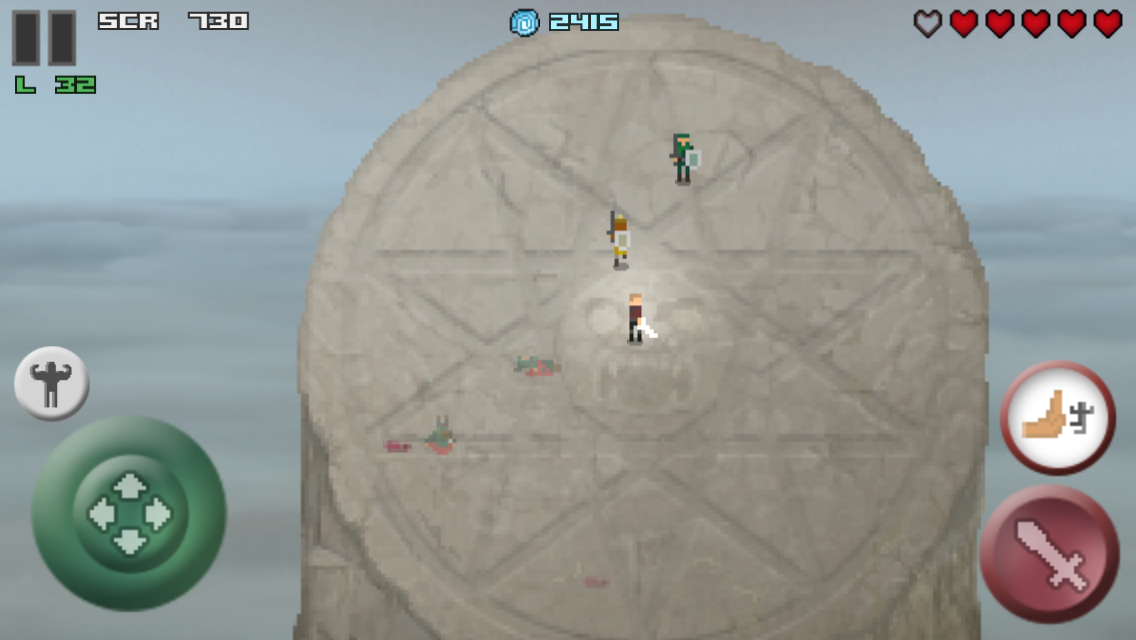 To grow more powerful, you need not only to gather power but also to survive as long as possible. As you reach certain waves for the first time, you’ll unlock the ability to purchase new moves using the power you’ve collected from fallen enemies. There’s a good mix of active, passive, and general strengthening abilities available. Tying their availability to your progress in the game is a good way of ensuring that you’re always learning some new tricks as you make your way through. Many of the powers come in sets of two where you can only choose one, so you’re going to need to make some hard choices about which ones you want. You can upgrade on the fly simply by bringing up the pause menu, so you can spend your power as you earn it if you like.

This wide variety of abilities gives you a lot of freedom in terms of how you want to approach the combat. You’ll need all kinds of tricks to come out on top, because while the enemies in this game aren’t the brightest fellows around, they make up for it in sheer numbers. At times, you’ll have several different types of enemies all after you at once, and it’s sometimes chaotic trying to keep them all under control. Even something so simple as adding a shield to a plain old warrior requires new tactics. Do you try to push him off the edge to deal with him quickly and lose all of the loot he might be carrying? Should you rush him with frenzied swings of your sword attempting to smash his shield and take him out? Or will you carefully position yourself and time your swings to defeat him without breaking his shield, therefore claiming it for yourself and greatly extending your ability to survive?

Then, just when you think the game is shining its brightest in big group battles, the bosses show up and demonstrate just how satisfying a little one-on-one can be in Only One. They’re a bit smarter than their minions, faster, and more powerful, and you’ll have to learn their patterns and retaliate carefully if you want to avoid death. The rewards for taking down a boss are great, though. Not only do they drop a ton of loot, but beating a boss also gives you a precious continue point should you be cut down before your time. If you can’t beat the boss, you’ll be sent back to the wave after the previous boss whenever you die. I like the way this continue system works, as it strikes a good difficulty balance. You don’t have to clear all 70 stages of the game in one go, but dying does have its consequences, so there is a proper feeling of tension as you battle the later waves and boss of each set.

Of course, all of these abilities, enemies, and bosses would be for naught if the main element of the gameplay, which is to say the swordfighting, didn’t hold up its end of things. Luckily, Only One fares better than I thought it would just by looking at it. The characters might look simple, but the swordplay is quite strategic. Positioning and watching for an opening are both vital skills. Attacks have real impact, often pushing one or both of the combatants back. With the ever-present threat of the arena boundaries and, usually, a handful of other enemies to worry about, you need to think about where your fight is going to end up before deciding to hold your ground. Even if you’re really good with a blade, though, you’ll need to be on your guard, because the game has all kinds of amusing little tricks it’ll play now and then, such as an earthquake that shakes the entire field. 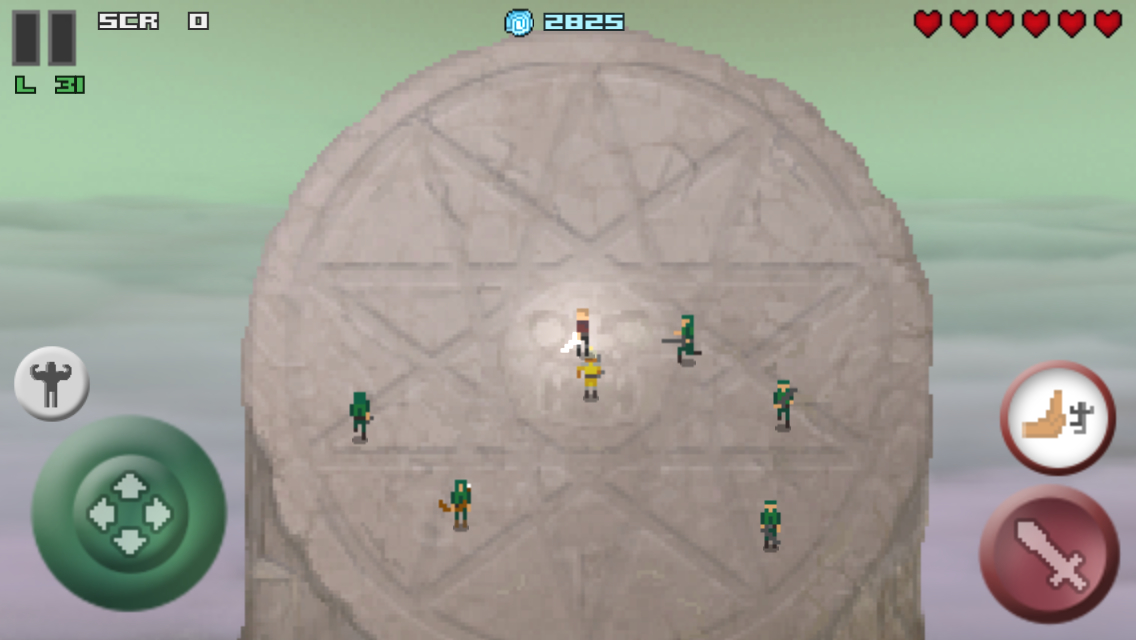 The game uses virtual controls, with a directional pad moving your character around, a large button swinging the sword, and various other buttons for activating your special abilities once you’ve earned them. They work pretty well generally speaking, though there were a few times where my thumb lost the directional pad or vice-versa. One piece of advice I’ll give is to be very careful around the edges of the arena. The exact outer boundary, especially near the bottom, isn’t as clear as you would think, and falling is instant death, so don’t get too greedy going after little pieces of power that end up there.

As I already mentioned, and I’m sure you can see from the screenshots, Only One has a very simple look to it. It personally reminds me of early Amiga-era, and the look certainly carries a charm. When things get busy, it’s sometimes hard to tell certain enemies apart at a glance, but that adds to the chaotic feel of the larger groups of enemies, so it didn’t bother me too much. The sound design is superb. The effects are all great, and the voices are awesome. The music could use a bit more variety, but what’s here isn’t bad at all. There’s Game Center support for leaderboards, but no achievements, which is something I think the game could benefit from. 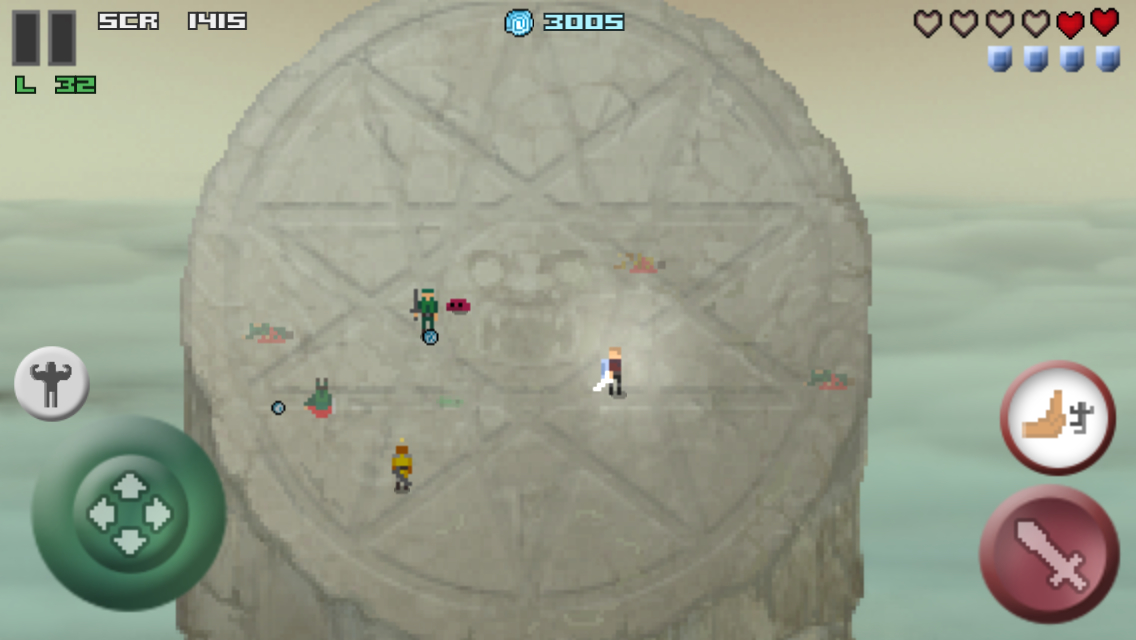 In terms of IAP, you can pick up a currency doubler or some currency packs. The doubler has the added bonus of letting you respec your abilities without restarting your character from scratch. Given the high price of some of the abilities, I found the doubler, which sells for two dollars, to be a pretty good pick-up. Without it, you might have to make do without some of the powers, but the bottom line for progress in Only One lies more with the player’s skill than the special powers, so you probably don’t need it, strictly speaking.

All in all, this is a really cool action game with depth well beyond what you would expect just by looking at it. The combat is engaging, the bosses are implemented well, and the variety of abilities gives the game tremendous replay value. People in our forums have been having a great time with it, too. If you like a good hack ‘n’ slash or are just looking for a good Highlander simulator, crank up the Queen and give this one a download tonight. You’ll have yourself a real good time, I promise.