Some games just click the moment you boot them up. They ooze charm at every turn, forcing you to pay attention and stay glued to the screen. From the very first “tap for service!" prompt, Toast Time ($2.99) was just that type of experience — and it’s pure gaming bliss.

Toast Time is basically a mixture of all things related to toast and breakfast, Super Crate Box, old school platforming, and a perfect mobile control scheme. It’s not a platformer per se, but you’ll rocket around the screen with great precision as Terry the Toast, as you attempt to stop all of the little critters from touching your alarm clock, which basically functions as your home base — and the key to breakfast time. 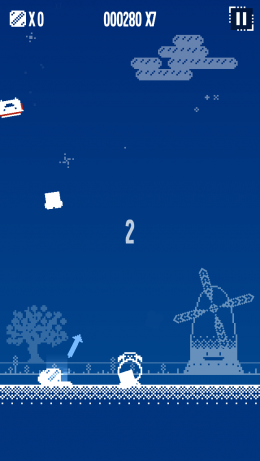 To do this, you’ll tap the screen where you want to fling plain white toast projectiles. It’s such a simple control scheme, but where it really shines is how in-depth it really is. For instance, you can shoot left or right while on the ground for precision, shoot the ground to propel yourself up like a jetpack, and fire away in any direction while you’re flailing around. You can also initiate a “belly flop" by quickly going up and slamming back down onto enemies. Since the game is played vertically, you’ll have every opportunity to tap wherever you need to on the screen, with the ability to go as high as you want.

It’s just as fun as it sounds, as your not really limited by anything, including the controls. You can fire away to your heart’s content, flipping around the screen at will or methodically attacking enemies from a more grounded location. As you smash in-game crates you’ll unlock more weapons for your arsenal, which actually have a decent amount of variety and change up your strategy quite a bit.

For instance, the baguette acts as a mine of sorts, sticking into the ground and shedding bullets incrementally — so placing it in key locations near your clock is a great idea. Other items like the bagels are reminiscent of Contra‘s “spread" power-up, and so on. Each weapon has a distinct purpose, and can be used to solve a variety of situations — they’re also all fun in their own way. 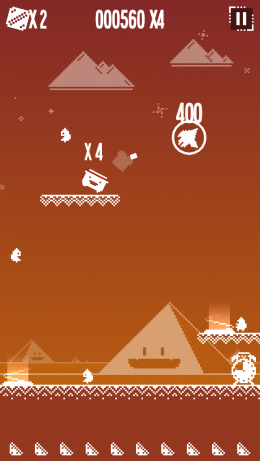 The level design is also wonderfully crafted, and some of the harder stages can get pretty intense as hidden enemies fly onto the screen from new locations. Maps can mold into something entirely different or add in new enemy spawn points, which always keeps you on your toes. Some foes will come from flying in from the top of the screen, others will march from the bottom, and many more will utilize various bounce pads to fling themselves into different areas. There are also a few challenge levels to mix things up, with parameters such as “limited ammo." Make no mistake — getting a three star rating in every level of Toast Time is hard — and satisfying.

Visually Toast isn’t going to wow anyone, but the retro style fits the game perfectly. While the blue and white colors may feel a bit boring at first, each new world unlocks a different palette to help mix things up. Because the graphics aren’t lavish they never feel in the way, and all of the frenetic action happens at a fairly breakneck speed thanks to the smooth engine.

It helps that Toast Time has an endearing soundtrack, coupled with perfect sound effects that will have you associating shooting toast with “pew pew" for some time to come. The humor isn’t “laugh out loud funny," with stages such as “The Breakfast Club" and “Toast Busters," but it will more likely than not bring a smile to your face a couple of times throughout the game. It’s not just the humor though that really makes the game shine, as Toast Time goes all out to really embrace the toast theme through and through, with appropriately inspired weapons and items.

There’s also a ton of content to work through, as Toast offers up 16 different weapons, countless costumes, and a few other hidden extras. It’s incredibly addicting, as every crate contributes to your overall unlocks, so no individual run really feels like a waste. It’s brilliant way to keep you playing for sure, and each new item actually feels different enough to compel you to keep going. Toast also constantly reminds you of when your next unlock is during and after each level, which is a nice feature.

Toast Time controls, looks, and plays perfectly on the platform. It’s a great example of how to introduce a concept that’s normally seen in console releases onto mobile devices, and maintain a sense of charm that transcends its retro veneer. If you’re looking for a fun time waster and you’re a fan of Super Crate Box, Toast Time is for you.