When all else fails, novelty can do a lot for a game. On The Line ($0.99) isn’t a very deep or complex game, but it does present an interesting spin on the endless running genre that’s bound to appeal to some despite its simple nature. We’ve seen almost every kind of hero in this genre, from a man in a suit to Garfield, but I think this is the first time we’ve had an endless game where your finger is the main character. It’s not as fully-realized as one might hope, but its unique concept is worth checking out if you’re looking for something a little bit off the beaten path.

Basically, the game presents you with a vertically-scrolling, randomly-generated maze. Your challenge is to keep your finger on the safe path as long as you can. If you touch a wall, you’re finished. The longer you play, the faster the screen scrolls and the more complex the paths become. There’s not a whole lot more to it than that, to be honest. After you finish a run, you’re given your score in centimeters and your progress towards completing a picture of a monument of some form or another is displayed. When you complete the picture, you’ll unlock a new color and be given the next picture to complete. 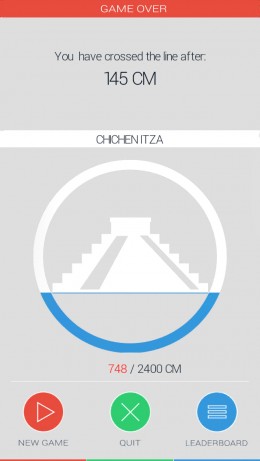 It’s a bit slow to start, but the pace picks up pretty quickly around the 100 centimeter mark, requiring speedy reflexes and fingerwork to survive. Thankfully, once you finish the first monument, Stonehenge, you unlock a hardcore mode that starts you off at a higher speed, allowing skilled players to skip the pokey speed the game usually starts off at. The game supports Game Center leaderboards and has a decent list of achievements, although a few of them are absolutely bananas in terms of difficulty. Due to a minimum of chance elements in the game beyond the maze itself, On The Line is actually quite well-suited to competing with your friends for scores. It’s also a pretty tough game, so every centimeter you can eke out counts for a lot.

The maze itself has a pretty good variety of traps to throw at you, though you’ll see certain sections repeat very frequently. Even after playing the game quite a bit, there was still the occasional section popping up for the first time, and of course, the random combinations of even the familiar sections makes for an interesting run each time. There are lots of winding passages, moving obstacles, and tight squeezes to try to maneuver around. You’ll go from sliding around a zigzag passage to scooting through a closing wall and dodging giant balls rolling in opposite directions in very quick succession.

Since you’re really just moving your finger around, it couldn’t be more intuitive to play. The one problem I might have had with this set-up seems to have been anticipated by the developer. If you need to take your finger off the screen for any reason, whether to rest it, readjust, or to poke a ninja in the eyeball, the action pauses, placing a dot on the screen that you have to push down on for a few seconds to resume. My biggest issue with the controls is that, as I’ve mentioned in other reviews, I’ve got some big fingers. I’m reasonably certain the game creates a hit-box the same size no matter the actual size of the digit used, but it felt difficult for me at times to suss out exactly where collisions would occur with my finger occupying such a large space. That’s more my problem than the game’s, but it’s something to think about if you’ve got big paws. 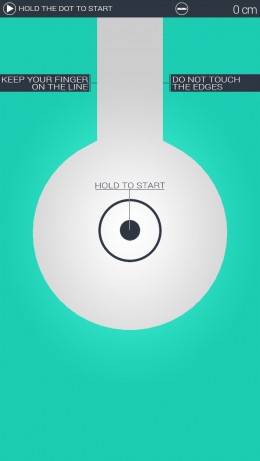 The presentation of the game is very minimalist. It’s kind of funny seeing a big Unreal Engine logo whenever you start only to be followed by a game that uses flat geometry of a single solid color to create its obstacles. The only way the graphics ever change is when you unlock a new color. It’s certainly clear and easy to process, but I did find myself wishing for a just a little more visual excitement. At the very least, I will praise the game’s framerate, which runs at a silky smooth 60 frames per second. The music is pretty cool, with a nice electronic vibe and enough variety that it never gets repetitive.

It’s certainly a novel game, and if you can get into a score competition with your friends, you’ll probably get a lot of mileage (centimeterage?) out of On The Line. If you’ve become disenfranchised with runners but like the endless score attack concept, you might want to give this game a try to see if its fresh spin does anything for you. It’s pretty low on content and not everyone will get into what it’s trying to do, but the interesting idea and solid execution certainly merit investigation for the curious. If you do pick it up, head over to our forums where, as usual, you can find some great players to compete with on the leaderboards.