This is a strange story for an otherwise normal Saturday, but apparently Dong Nguyen, creator of the international super hit Flappy Bird (Free), has had enough of everything that comes with being an overnight sensation and is going to take the game down from the App Store. He apologizes to Flappy Bird players, and states via Twitter “22 hours from now, I will take ‘Flappy Bird’ down. I cannot take this anymore." Here is the tweet in question. 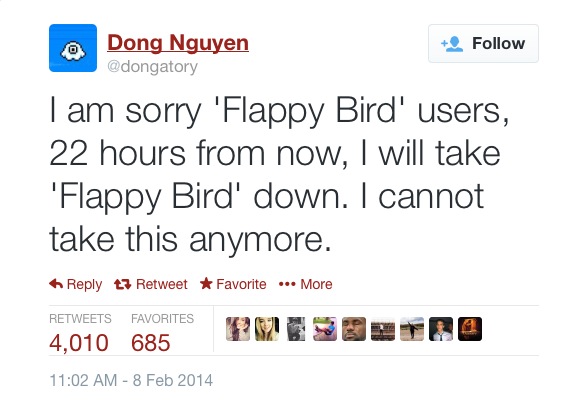 A few follow up tweets state that Dong is not pulling the game due to any legal issues, and that he won’t be selling Flappy Bird to anyone. Finally, he tweets that he’ll still continue to make games. While most anyone would kill to have a number one app across the globe, Dong has seemed to shy away from the spotlight, declining most interviews and even asking the media to give him peace earlier this month. It looks like he’s finally hit his breaking point. So, you better grab Flappy Bird now if you want it, because if Dong follows through on his tweet then you won’t be able to download it anymore by this time tomorrow.