As someone who grew up in the rather harsh winters of Northwest Ontario, Canada, I know all too well about snow and what a genuine pain in the butt it is, both to remove it and to keep it off. Waking up early school mornings to march outside with a shovel while the snow was still falling, knowing full well as soon as I got home from school, I’d be doing it again, followed by another round just before bed, I have a good understanding of the seemingly futile attempt to fight off Mother Nature. I mention this for two reasons: first, I am certainly in a position to vouch for the authenticity of any game trying to capture the essence of snow removal, and second, you would think that I would never, ever want to play a game that did.

Well, on the first point, I can confirm that Dawn of the Plow ($1.99) really does an excellent job of getting to the core of plowing snow. You cannot win, only stave off the inevitable as long as possible, and hope for a spring that seems like it will never come. More surprisingly, I found myself liking this game quite a bit, at least after a while. I’m not going to lie, my first several times playing, I was frustrated and a little confused, wondering how the people in the TouchArcade forums had steered me so terribly wrong. I pushed on, though, and at a certain point, something just clicked, and I found myself having a pretty good time.

I guess I should explain what the game is before I go on too much farther, though. Dawn of the Plow is a game where you are the driver of a snowplow truck. Your job is to keep the roads clear, which is no small task since the snow never stops coming. Your score is based on how many cars safely make their way across the map. Cars will come to a complete stop and express their dissatisfaction if there is a snowpile blocking their way, which reduces your approval meter. If your approval meter reaches zero, you’ll be fired. Naturally, if you hit any cars, you’ll also get a game over. The game is played from a three-quarters overhead perspective, and there are three maps that get progressively bigger. Your actions are limited to moving forward, moving backward, turning, honking your horn, and, if you collect the right power-up, throwing salt.

It wouldn’t be too hard if it weren’t for one thing: the snow. While your truck turns tightly when you’re on the roads, if you go off-road, it handles like a cow on ice skates. It’s not totally unpredictable, mind you, but the wider arc of your turn can quickly lead to things getting out of hand. Because of this, it probably seems like a good idea to stay on the roads, and generally, it is, but you’ll need to venture off-road now and then to collect power-ups, avoid collisions, or for simple reasons of efficiency. It’s an interesting risk/reward mechanic, and once you come to grips with it, the game has a very unique and compelling feel. 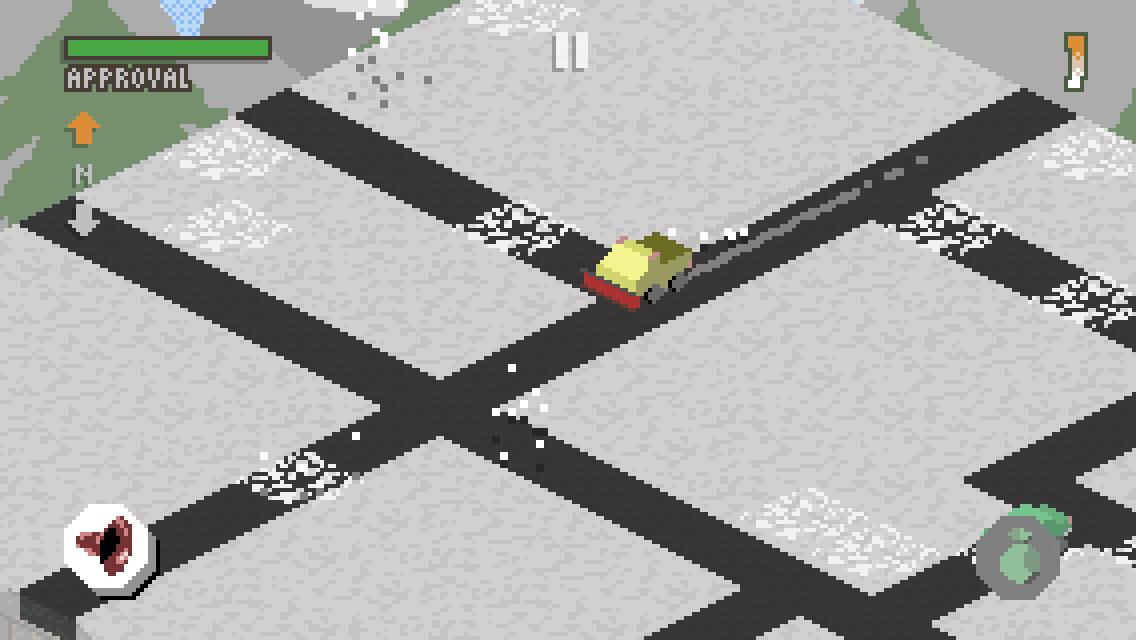 This is one of those games where it’s hard to score points in any great number, and while you’re getting used to the mechanics, you’ll probably score less than five points in a run. Once you’ve learned how to play, well, you’ll still probably score less than 20 points, but you’ll feel pretty proud for doing so. There are tangible rewards for doing well, since you’ll need to score a certain number of points to open up the medium and large maps. The bars for doing so aren’t set terribly high, but you’ll definitely need to learn to play to reach them. The larger maps open the game up even more, with the wide expanses leading to more ventures out into the risky snow.

The controls are pretty simple, with a swipe up or down controlling accelerating and reversing, taps on the left and right sides of the screen doing a 90 degree turn, and two virtual buttons for your horn and the salt. At first, I had trouble turning on the snow, because I didn’t realize that even though it’s coming out slowly, a turn on the snow is still leading to a 90 degree turn, so I was tapping too many times and just sort of going nowhere. Once I understood that, things got a lot easier, though I had issues on the rare occasions I needed to use the horn, since my fingers were never in the right positions to do so. I also sometimes experienced a bug where my truck would not turn, though this happened quite rarely. 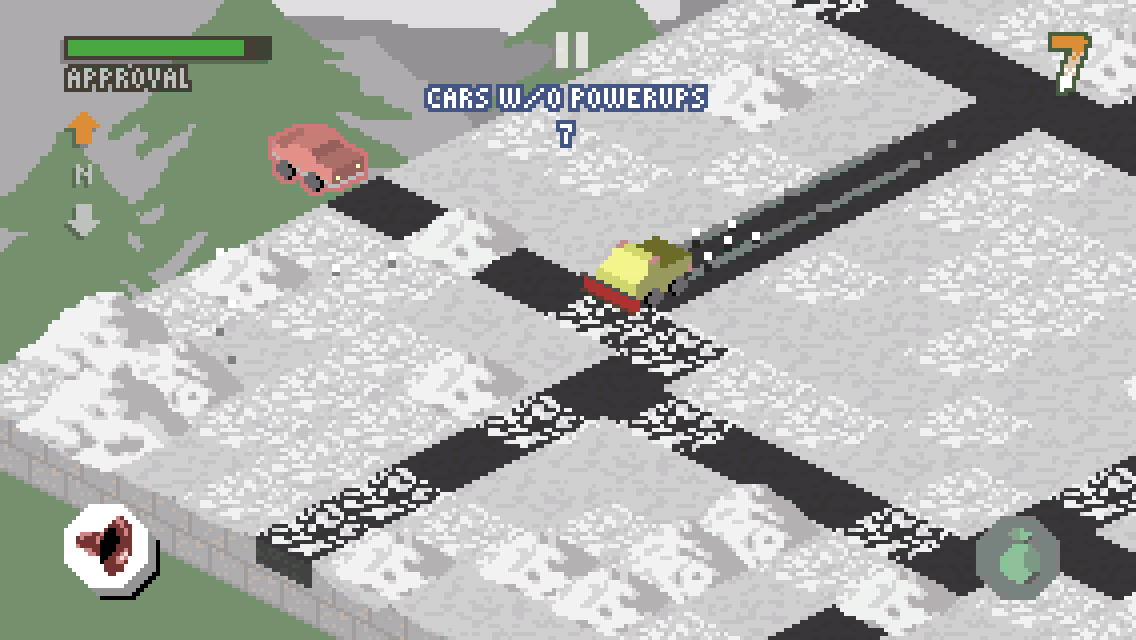 As you play, an assortment of power-ups can appear. In addition to the aforementioned salt, you can also get power-ups that help your approval rating, give you traction on snow, and let you plow through huge piles of snow with ease. They’re all quite useful, but you’ll almost always have to go out of your way to get them, so you’ll need to think carefully as to whether it’s worth the risk at any given point in your game. The nature of the game changes as you play, with more and more snow falling, leading to more giant piles of snow around and more irate drivers, so while the plow and approval power-ups aren’t all that useful in the early going, they become vital in the long run.

The graphics in the game use a simple pixel art motif. The colors are pretty subdued, but it fits the setting well. The music rides along with the 8-bit style, giving the game a bit of a jaunty feel with its bouncy composition. There are no IAPs in the game, and it has Game Center support for leaderboards and a list of really cool achievements. There’s a good competition going on with people in our forums, so feel free to join in and try to top them. 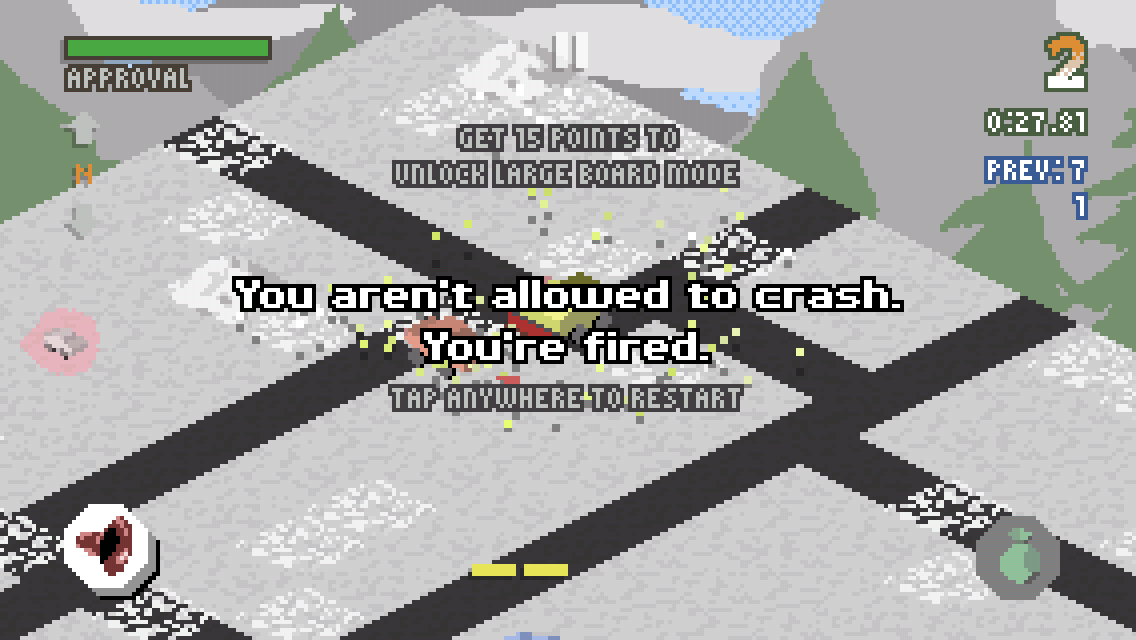 It’s a weird feeling when you go from being confused and having no fun with a game to having a great time with it. Dawn of the Plow isn’t something you’re going to instantly enjoy, but stick with it for a little bit, and you’ll be having a blast in no time. It’s one of those great purely skill-based games that challenges you to wrestle away every single point you can before it sends you to your doom. That’s something that has great appeal to me, and if you also like games like that, you’d do well to pick up Dawn of the Plow and give it a go.