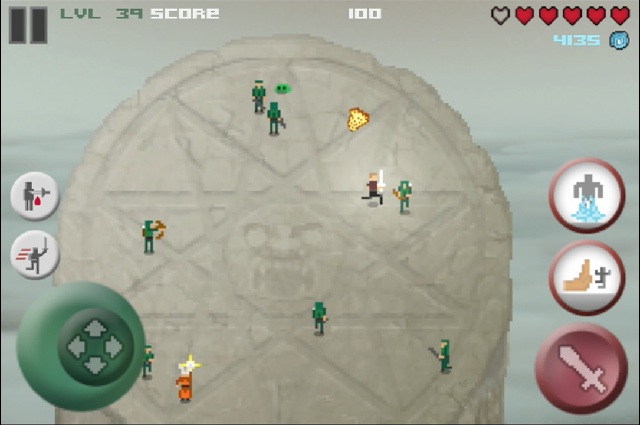 If you keep an eye on our Upcoming iPhone Games Forum, you’ll no doubt totally be aware of the phenomenon that is totally open development that some iOS developers get really into. Ernest Szoka’s Only One is a perfect example of that, a game that was originally revealed all the way back in November of 2012 which has seem semi-frequent updates from the developer on what he’s been up to.

If this is the first you’ve heard of it, the basic idea behind the game is that it’s a, in the developer’s own words, “Fast paced arena style hack and slash game Only One is game where you kill enemies and throw them off a sacrificial pillar in the sky with your magic sword as you gain power and abilities to ultimately become the ‘Only One’ left standing!" It’d probably make more sense if you’ve seen Jet Li’s totally ridiculous action movie, The One. Here’s the Papa Roach-laden ultra-early-2000’s scene in question:

So, in the game, you basically similarly fight an endless wave of dudes on a pillar, because, why not. It’s also got all the things that seem to really draw me into these sorts of mindless fighting games: An experience system, special abilities, stats upgrades, traits to unlock and more.

Take a look at the beta trailer:

It seems particularly hectic, especially as the amount of dudes on the platform ramps up. Either way, I love it when developers take scenes from obscure movies and turn them into a game. More folks should do that. Only One was submitted to Apple yesterday, so, pending any approval drama, we should be in fighting endless swarms of guys pretty soon.