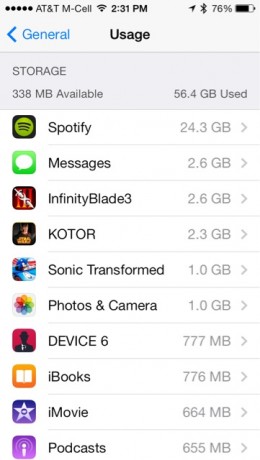 It’s a problem. iOS device space is at a premium. Each year, the hardware improves in iPhones and iPads which leads to even bigger and more impressive gaming experiences. Because of this, the games themselves are also increasing in size. A game topping the 1GB mark is the norm, with many games even hitting the 2GB and 3GB mark when actually installed on a device. That’s not even taking into account movies, music or other media which can take up precious device space. As an owner of a 64GB iPhone, the largest capacity iPhone available, even I have trouble juggling which apps and media to have installed at any given time, and frankly there just isn’t enough space to have everything I want installed at once. I can’t even imagine what life is like for 16GB device owners, or even owners of older 8GB devices.

The good news is that there are some steps you can take to ensure you’re always maximizing your device’s space limitations. Vovin, a long-time TouchArcade forum member, has taken it upon himself to write up a little guide on doing just that. It’s titled Guide To Clean-Up And Managing Memory On Your iDevice, and it features both technical tips on how to clean up device space as well as some good practices for utilizing your space in a way that’s the most useful to you.

For example, as any avid iOS gamer knows there’s simply far too many good games day in and day out to be actively playing them all the time. In fact, a long-running joke around the TouchArcade community is that finding, buying and collecting cool iOS games is more of a game than playing the games themselves. We’re all iOS game hoarders to some extent. Well, one of Vovin’s tips is to make a list in the Notes app on your device of games which you haven’t played in over a month. Chances are if you haven’t played it in that long then you aren’t likely to play it any time soon. Then you can safely delete said game to free up some space, but since you have a record of those games you’re deleting, if you ever do squeeze in the time to try out that one game you bought on sale but never got around to trying, you’ll be able to re-download it again. Of course, you’ll need to be careful with not wiping the progress of games that you have played a bit of and don’t want to lose, so be mindful of that, but it’s a nice tip nonetheless for dealing with big backlog of games.

Now, that particular guide talks about using a file exploring program and actively unneeded files from your device. Whenever you’re diving in and messing around with an iOS device’s files in a way that’s not condoned by Apple, there’s risk involved. The guide starts with a disclaimer that we fully agree with, and should go without saying, but changing your device’s files is something you should do at your own risk, and always make sure you’re backed up to iCloud or your computer in case something does go awry and you need to restore to a previous state. That said, it’s a handy collection of tips that we thought some of our readers might find value in, so be sure to check it out.