As soon as I heard the title of Bardbarian (Free), I had a good feeling that this was going to be something worth checking out. It’s a little known fact that bard appreciation is a sign of good taste, after all. So I was certainly looking forward to giving this a try, but my face had no way of knowing how much it was about to get rocked. This game is half-shooter, half-castle defense, and half-RPG, mixed in with a good sense of humor and some sweet tunes. Don’t worry about that extra half, barbarians have no need for math! Just kidding, stay in school, kids. Being able to calculate the best angle to cleave a skull in twain with your broadsword is a skill that can apply to all kinds of jobs.

In Bardbarian, you play as Brad, the defender of a town that is frequently assailed by monsters looking to destroy the town’s awesome crystal. Growing rather bored with smashing skulls the traditional way, Brad decides to forge a lute from one of his axes and use the language of love to lay some hate down on his enemies. Your main goal is to destroy every enemy that approaches the village, and to protect the village’s crystal while making sure you don’t get finished off yourself. Brad cannot directly attack the monsters, but he can shred a wicked tune that will summon allies to his side who can. Taking the bard thing seriously, he can also use one of three buffs on the party to temporarily boost their attack, speed, or defense. 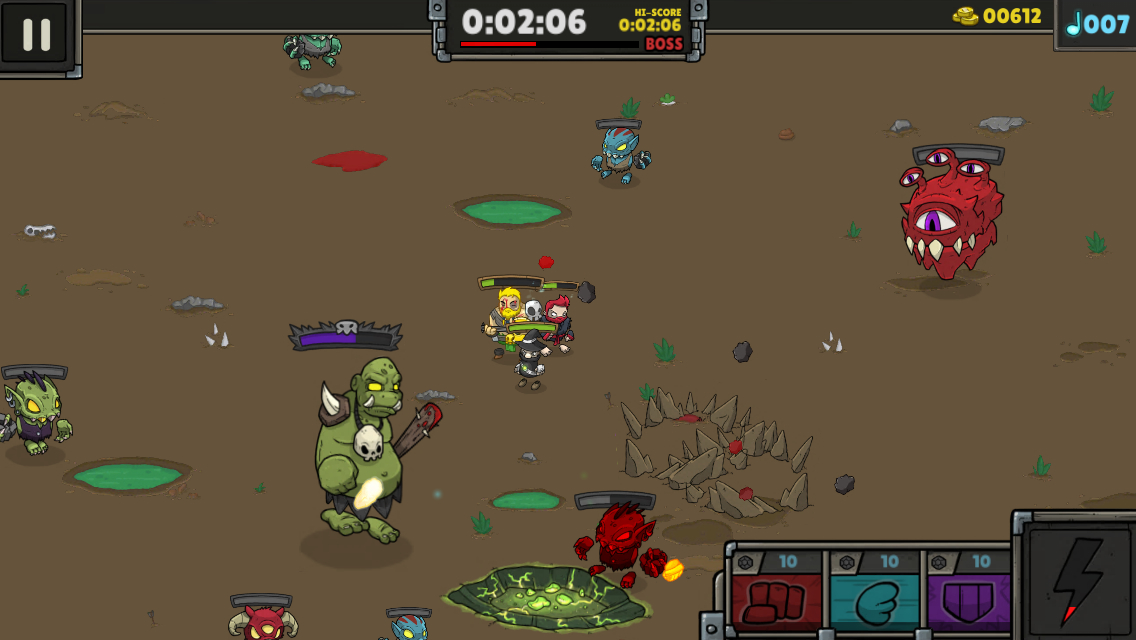 Everyone attacks with projectiles, giving the whole thing a shooter twist. You need to weave through enemy bullets while positioning your group such that you can take out your targets. In the beginning, it’s really easy, but as you progress, the game almost starts to go into danmaku/bullet hell territory. The enemies get stronger, more numerous, and fire more projectiles, so sooner or later, you will be defeated. Luckily for Brad, the enemies drop gold that can be used to improve the abilities of his group and make some useful additions to the town itself. You’ll almost always have enough gold to improve something, so you’ll come back a little bit stronger every time.

As you progress through the day, you’ll unlock new allies to fight by your side, eventually recruiting 12 different types of adventurers to fight by your side. Each of them has a different way of helping you out, from attackers with various types of projectiles to support type characters that can heal or build turrets. In the beginning of the game, you can have up to three allies join you at a time, but as you upgrade, you’ll be able to have a larger band. Regardless of the size of your group, though, you can only have three different types of allies, so you really have to consider if you want to bring along a healer at the cost of another attacker, for example. The units are fairly well-balanced, with lots of winning combinations, allowing you a lot of control as to how you want to play, as well as offering great incentive for replays.

The game’s main mode spans a single day, with 20 waves of enemies. That might not sound like much, but the way the difficulty ramps, it’ll take you a while to get strong enough to survive. You’ll reach checkpoints a few times throughout the day, and you are free to start from any of them once you’ve hit them, but it’s a bad idea when you’re weak to jump back in where you left off. See, as you play, your teammates will gain levels, making them stronger and able to take more hits. When you start from a checkpoint, they’ll be back to their base levels. This can be mitigated with a couple of the town improvements available in the shop, but in the beginning, you probably won’t be able to afford to sink much gold into them, so you’ll have to start from the beginning of the day if you want to make a proper run at it. It might sound like a grind, but the game is so fun to play, it never feels like it.

You can move Brad around with a floating virtual joystick, and use any of his abilities by touching buttons on the right-hand side of the screen. Every ability has a note cost associated with it. You’ll earn notes as you play, and if you stand still, you’ll gain them a bit more quickly. Of course, it’s pretty dangerous to stand still for long in this game, so soak them up while you can. Your party will hang around you and move with you. They have lifebars just like you do, and if theirs is depleted, you’ll lose that unit and have to summon another one. How tightly they stick with you can be upgraded in the shop, but there’s no doubt that they present a much larger target for projectiles. 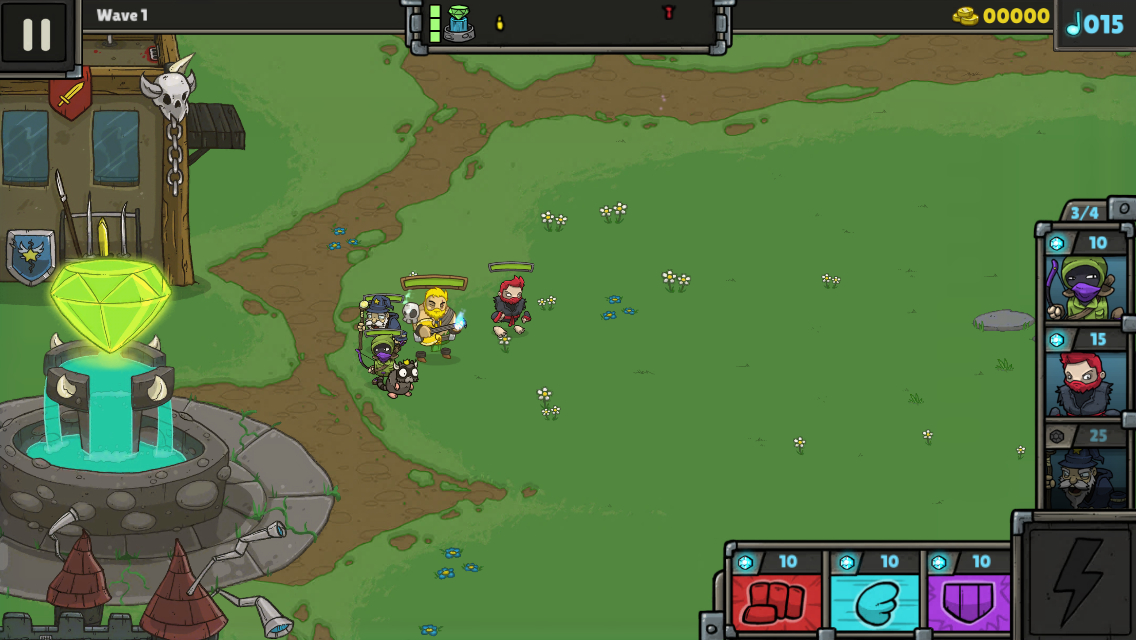 Should you manage to avoid getting anyone hurt in the process of killing five enemies in a row, you’ll earn a stun attack which is necessary for surviving the more crowded waves. As your group gets larger, it’s harder to keep out of the way of enemies, so there are times where you might want to have a smaller group so that you can earn stuns more easily. You’ll also generally want to keep a buff up at all times. The effects of buffs are temporary and you can only have one up at any given time, which adds another layer of strategy to the game. It all adds up to a wonderful combination of skills, reflexes, preparation, and thinking fast.

If you’ve cleared the campaign mode, bought all the upgrades, or just need a break, don’t worry, you’re not done yet. There’s also a survival mode that completely ditches that whole defense thing and embraces a pure shooter experience. Your upgrades don’t apply in this mode and you can’t summon allies at will, so it’s all on your skills and choice of buffs. You play on a medium-sized field with enemies appearing one after another. Random types of allies will appear on the field, and by touching them, you can add them to your group. The goal here is simply to survive as long as you can. The game supports Game Center leaderboards and achievements, so you can compete with other players for the best time. If that’s not enough, the developer will apparently be adding an endless wave mode to the game in an upcoming update. 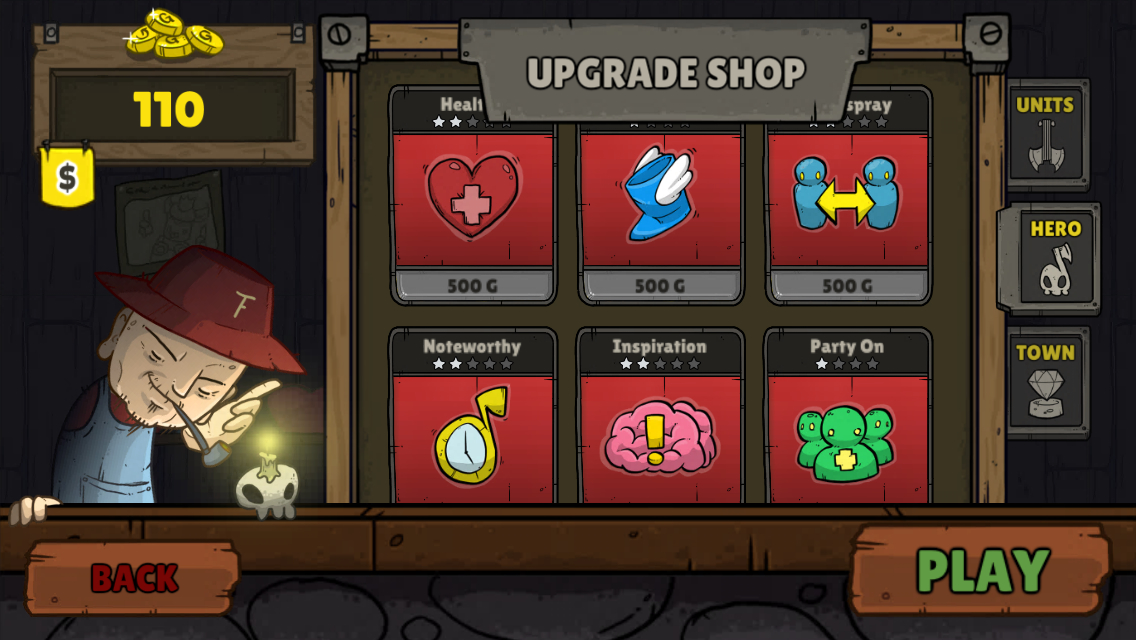 The graphics are colorful and cartoony, with obvious special care taken to make enemy projectiles stand out against the mayhem. There are a lot of humorous touches in the animations, giving the game personality to burn. Then there’s the music. Oh man, the music. You know as soon as you hear the Queen-like track hit during the title screen that you’re going to be enjoying the tunes in this game, and they do not disappoint. The music that plays during the game is frenetic, rocking, and makes the whole thing feel like a big, crazy rock ballad of destruction. It fits Bardbarian absolutely perfectly.

As for the IAP situation, you can buy gold and a nicely-priced gold doubler, but the game feels like it was balanced without any of that in mind. Like I said earlier in the review, you’ll always be able to afford some upgrades after playing, so it never feels like you’re spinning your wheels trying to scrounge up cash. Still, if you do decide that you want to speed things up a little, the doubler is only a dollar, which is refreshing given how many games go for a five dollar doubler these days. I played through without it for the purposes of this review, and I never felt like I needed it, so even if you’re not down with IAP, you have nothing to fear. 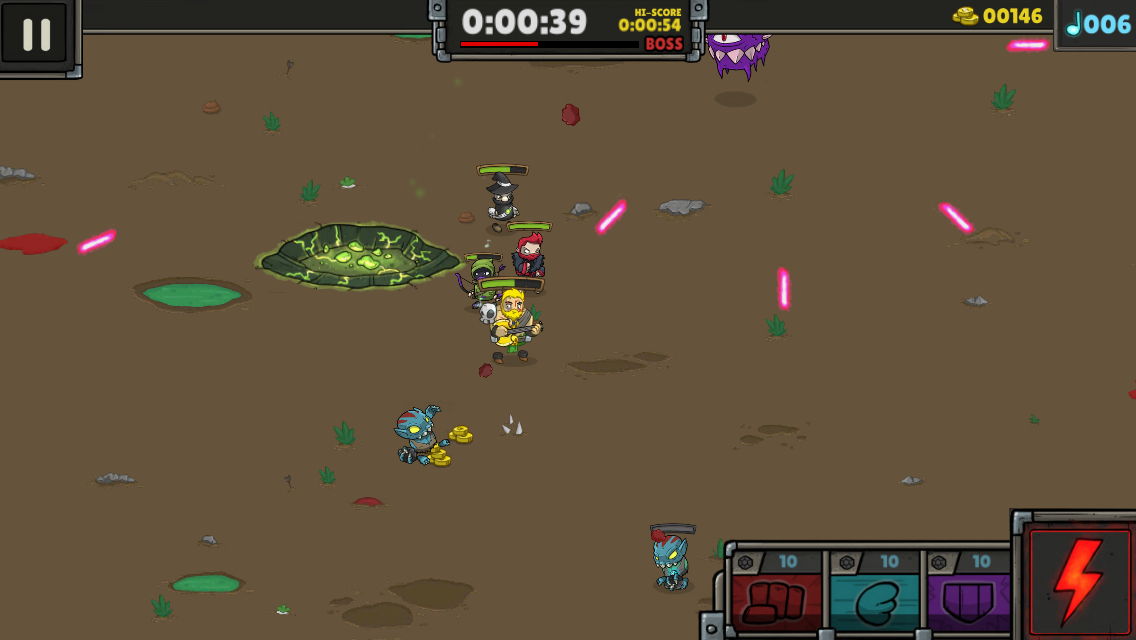 The only fly in the ointment is that as you get towards the end of the main game, a few weird bugs and crashes start to occur. I never lost any progress as a result of those crashes, but it really does seem like the latter portion of the game wasn’t tested as thoroughly as the first three-quarters. Some of the units have glitched behavior, as well. The developer has said they’re issuing a patch very soon to address these issues, but at the moment, it’s something you should be aware of.

That stuff aside, the game is just amazingly fun to play. Sometimes with genre mash-ups, things can get a bit dicey in terms of appealing to fans of the genres represented, but I truly feel this game hits all the right notes. Shooter fans are going to appreciate the fast action with a layer of strategy, while fans of defense games will surely enjoy the variety of units and strategies delivered in a fast-paced package. It’s received a great reception from the members in our forum, so head there if you want to read some more impressions. Barbarian is a game that just feels right in a lot of ways, and with a low price on top of that, you really need to pick it up, post haste.