Qix has been around for a long time — since 1981 to be exact. The objective is simple, to “claim" different areas of the screen by way of connecting lines, similar to JezzBall — a game everyone with a Windows PC has probably played. Years later Fortix rose to the challenge, mixing elements of medieval warfare along with it. Now, you can grab it on iOS in the form of Line Knight Fortix ($0.99).

Line Knight Fortix is the tale of the good hero Fortix, and his quest to vanquish the threat of the wizard Xitrof from the land of Artalom. You’ll do this by — drawing lines. Like Qix, all you have to do is capture certain areas of the board. But instead of faceless vacuums, you’ll have to divide and conquer certain areas of a kingdom, complete with orcs, dragons, and enemy fortresses constantly in your way.

To accomplish this, you’ll use swipe gestures to move Fortix around, gobbling up pieces as you go. The controls are very finicky and overly-sensitive, but you’ll get used to them after roughly half an hour of play, and compensate accordingly. It helps that you don’t have to hold your finger exactly on the knight, and can move him around on a macro level. If you’re playing it on anything other than an iPad, it’s tough to figure out exactly what’s going on. It isn’t that your hero is hard to find necessarily, it’s that all of the little bullets flying about are very hard to keep track of. 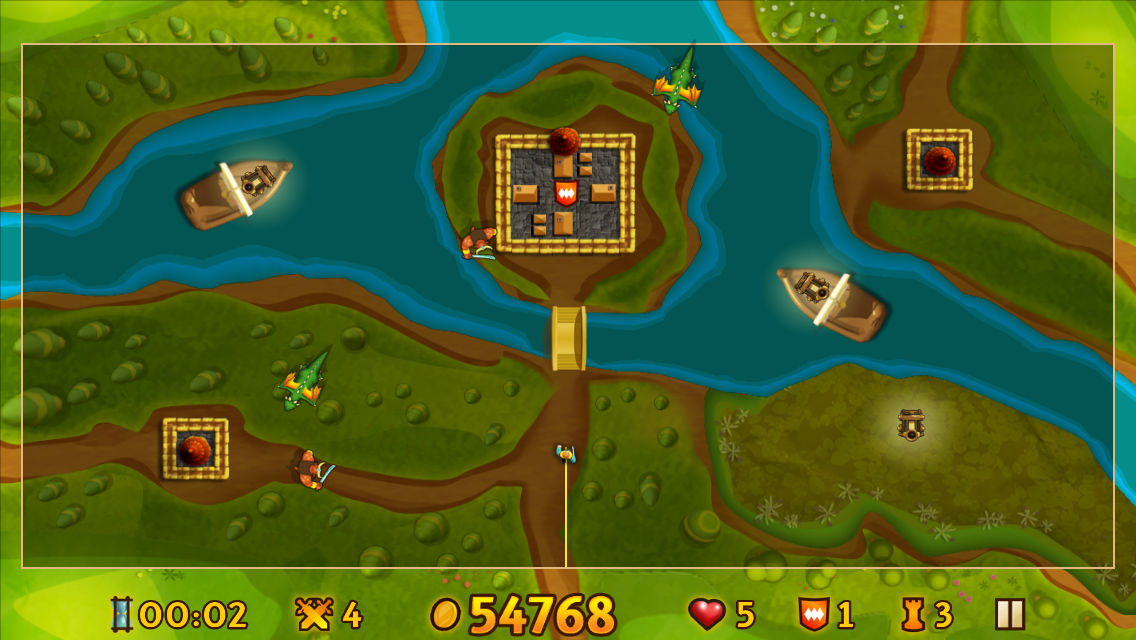 At first, I was utterly confused as to what was happening. Although the game does a great job explaining the concept of walking about in lines to “capture" pieces of the game board, I found myself dying quite often from seemingly random factors. It was tough to judge what was part of the background and what was an enemy, and as a result, I had many frustrating early runs. Eventually I realized that bullets and enemies were hitting my line, causing a starburst to fly out from behind and take me out. So you not only have to avoid direct contact with your hero, you have to watch your line as well, as it’s an extension of you.

You’ll have some help when grabbing areas, as capturing idle cannons throughout the board will help attack enemy fortifications. It’s all automatic, but it’s a cool feature nonetheless to make you feel like you’re actually in a war zone rather than a low-key puzzle game. Power-ups like speed boosts also add an arcade feel to it, making you more of an active participant in the proceedings — as well as mini-quests like grabbing keys to unlock specific doors.

Although the levels look far too similar, the layouts change frequently, forcing you to deal with different types of enemies like dragons who fly around the entire screen (and bone dragons who can home in on you), and ground troops that patrol smaller areas. When you add that to all of the bullets flying around you, things can get intense — but to a point, since you’ll see everything there is to offer sooner than later.

There’s a decent amount of content with 45 levels in tow, but there’s no leaderboard support to speak of so you might end up getting bored sooner than later — especially if you breeze past the moderately challenging mid-game stages. A lot more content would have been a blessing, especially with a larger locale variety and more of an effort to make it feel like an “epic quest" rather than a collection of new boards.

Line Knight Fortix can be an ordeal for quite a while after you start your adventure and try to figure it out, but if you stick with it, you’ll pick it up before you know it. The controls definitely need some work, but for those of you who have grown up on challenging action puzzle games, you should feel right at home. With a few tweaks and added support for leaderboards, the mobile version of Fortix would be a much stronger package.