A while ago, I reviewed Gameloft’s Despicable Me: Minion Rush (Free) here at TouchArcade and found that while it wasn’t really doing anything special, it was pretty solid all around and had a lot of charm. Like many of Gameloft’s games, it’s seen quite a few updates and addded content, so I’ve never quite brought myself to deleting it off my device, whipping it out now and then for a run or to let my son have a go.

Well, over the holidays, we were doing the family dinner thing, and I guess because Despicable Me 2 had just released on DVD, the kids were all over Minion Rush. They certainly had enthusiasm and endurance, but there was a lot of stuff that they were having trouble with that perhaps regular runner fans might take for granted. With that in mind, I thought it might be good to put together a little list of tips and secrets for the game. Some of this stuff isn’t going to be surprising to veteran fans of the genre, but we all have to start somewhere, right?

Unlock your first extra costume. From the main menu, go to “Options", then push the present box icon in the upper right. Enter Classic Minion, Firefighter Minion, and Baby Minion in that order to unlock the Baby Minion costume. This costume will give you a bonus to your multiplier. It’s not the best extra costume, but hey, free is good, right? At the very least, it’s better than the default Classic Minion, which has no special effects. 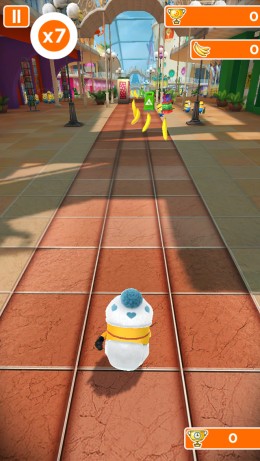 Don’t forget to claim your rewards. There are different types of goals to accomplish in Minion Rush. The typical set of three missions will earn you bananas, and it’s pretty well impossible to avoid claiming those, but there are other goals, some connected with Game Center achievements, that will earn you tokens, and it’s pretty easy to miss claiming those. To do so, from the main menu, choose “Goals", then click the icon on the top far right. Simply scroll down the list of achievements to find the rewards you can claim. This is a good source of extra tokens, initially.

Hoard your tokens. Notice in that last tip I said “initially". Because completing achievements earn you a fair chunk of tokens up-front, it’s easy to lose sight of how rare and hard to come by they actually are in the game. Don’t blow them on goofy things like buying bananas, using a boost at the beginning of your run, or revives. Instead, save them for extra costumes. Costumes are pretty expensive, so you’ll have to choose where your priorities lie when buying one.

Choose the right costume for the job. Worker Minion and Firefighter Minion are both somewhat reasonably priced at 600 tokens and offer up a banana bonus and multiplier bonus respectively. At the pricier end, for the more patient players, Ninja offers an even bigger multiplier bonus and Vampire makes your power-ups last considerably longer. Both are priced at a hefty 1200 tokens, so you won’t be getting them anytime soon. Many of the costumes have effects that are only good in one location. This made their value questionable back when there were only two areas, and now that there are several, it’s hard to recommend any of them. 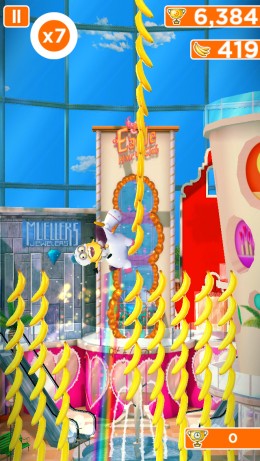 Boost your banana collecting power-ups first. So you’ve got a bunch of bananas and are looking at the power-up list in the shop wondering which one you should pick up first. It’s best to prioritize the Banana Split and Banana Vacuum power-ups since having them helps you earn bananas more quickly, cutting down on the grind for the other stuff. Of course, it’s worth putting a single point in every power-up before focusing on any one in particular, just to make sure you can clear missions and do mini-games.

Play a little cat and mouse game with the bosses to boost your score. While you’re fighting any of the bosses found in Minion Rush, you might notice a couple of things. First, it’s pretty easy to avoid their attacks. Second, your score continues climbing even while you’re in a boss battle. The boss battles are actually easier to survive in than the regular stages, so if you’re purely going for score, it’s best to just toy with the bosses without killing them for as long as you possibly can. You won’t earn bananas this way, though, so be aware of that.

You can collect more bananas in the Fluffy Unicorn mini-game by playing a little worse. Yes, continuing in the theme of tips that involve holding back the ferocious tiger within, here’s one for the tilt-based Unicorn mini-game. If you collect bananas the whole way up, you’ll simply shoot quickly to the top and you’ll be returned to the main game. If you avoid touching bananas for a brief moment, the unicorn will start to descend. If you move to collect some bananas at this point, you’ll start climbing again. Basically, you want to play it so that you aren’t simply surging to the top in one blast, but rather making a series of boosts so that you can collect more of the widely spread-out bananas. 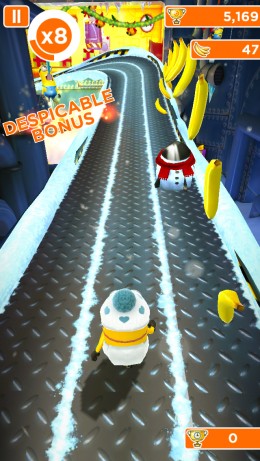 Have your personal goal in mind. Decide from the outset whether you want to play for bananas, score, daily bapples, or clearing missions, because these goals are sometimes at odds with each other. For example, if you’re going for score, you’ll want to prioritize knocking over other minions rather than collecting bananas. Runners are games of reflex, so being indecisive is a quick way to your doom.

Many of the other usual runner strategies apply. Minion Rush follows the template of lane-based runners pretty faithfully, so any tricks you may have learned in other games will work well here. Don’t forget you can switch lanes in mid-air, even though that makes no sense at all. Keep your eyes on what’s coming to avoid any nasty surprises. Grab any power-ups that appear, even if you have to forfeit some bananas to do so, as the bonuses are always worth it as long as you don’t kill yourself going for them. Try to hang near the middle lane if all else is equal. It’s easier to switch one lane in either direction to avoid an obstacle than to try to move from one side to the other.

Hopefully, this list of tips will help out some kids, both big and small, who are getting into Despicable Me: Minion Rush due to the home video release of the second movie. Gameloft has actually really done a good job of supporting this title, with lots of new content and pulling back a bit on some of the more egregious monetization and social elements. While it’s not something I play every day, I’m always happy to take a spin every now and then to see what’s new and have a little chuckle at the goofy animations.