Rhythm Thief & The Emperor’s Treasure was one of my favorite games of 2012. Released for the Nintendo 3DS, it was a rhythm game that transcended the genre in many ways, with a charming cast and a hypnotic, jazzy soundtrack. Here we are in 2014, and Sega has mysteriously released an iOS version of the same game, titled Rhythm Thief & the Paris Caper (Free). It’s not exactly the same, but rather an abridged take with some iOS-centric goodies.

Rhythm Thief‘s premise is particularly silly, but charming nonetheless. Taking place in Paris, you’ll play the role of 18 year old Raphael, who holds a pretty important secret — he’s an art thief by night who goes by the codename “Phantom R." Throughout the game you’ll team up with your faithful dog Fondue, and uncover a mystery involving the fateful resurrection of Napoleon Bonaparte. Sound ridiculous? It is, but it keeps you guessing often enough and engaged throughout. 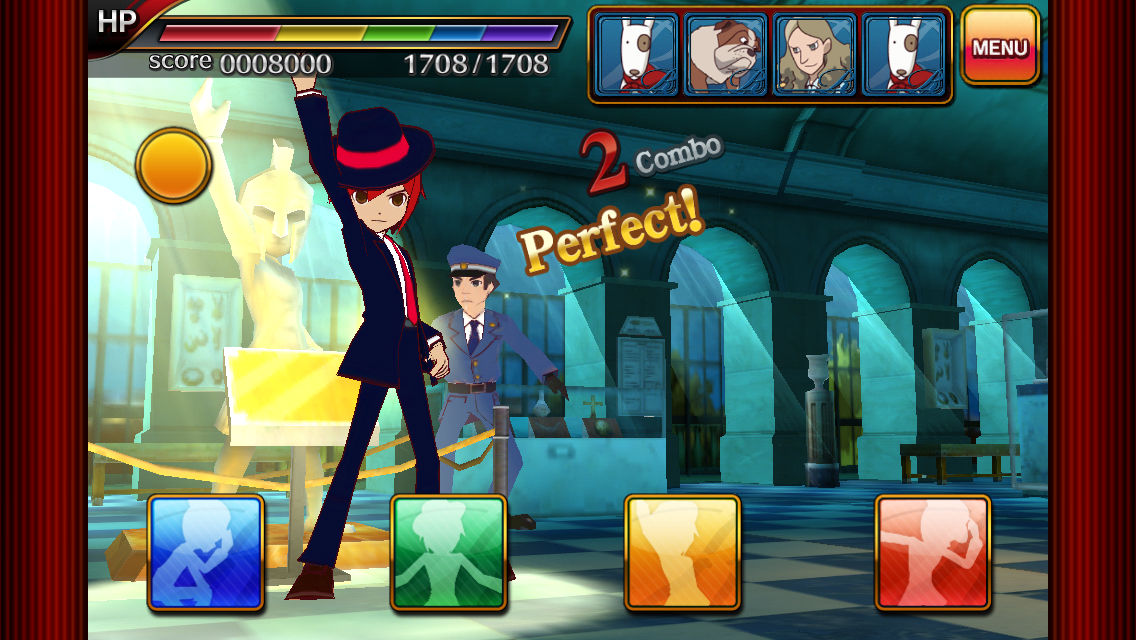 The Paris Caper is basically an abridged re-telling of the 3DS game. Instead of presenting lengthy dialog sequences mixed with anime style cutscenes, the iOS game is content on giving you bits and pieces of the story, and instead progressing the tale with a rapid fire slideshow of the proceedings. So if you value the narrative side of things more and want to try out Rhythm Thief, it’s best that you look for the 3DS version.

That’s not to say Paris Caper is a poor game though — because it’s not. It’s also a remake of sorts, mixing in brand new original minigames, and a “board game" like level system, as well as “accomplices," social features, an additional content available to purchase from the in-game store. Instead of wandering throughout Paris by way of an overworld system, instead Paris Caper decides to let you walk through different boards and experience lots of content at once. 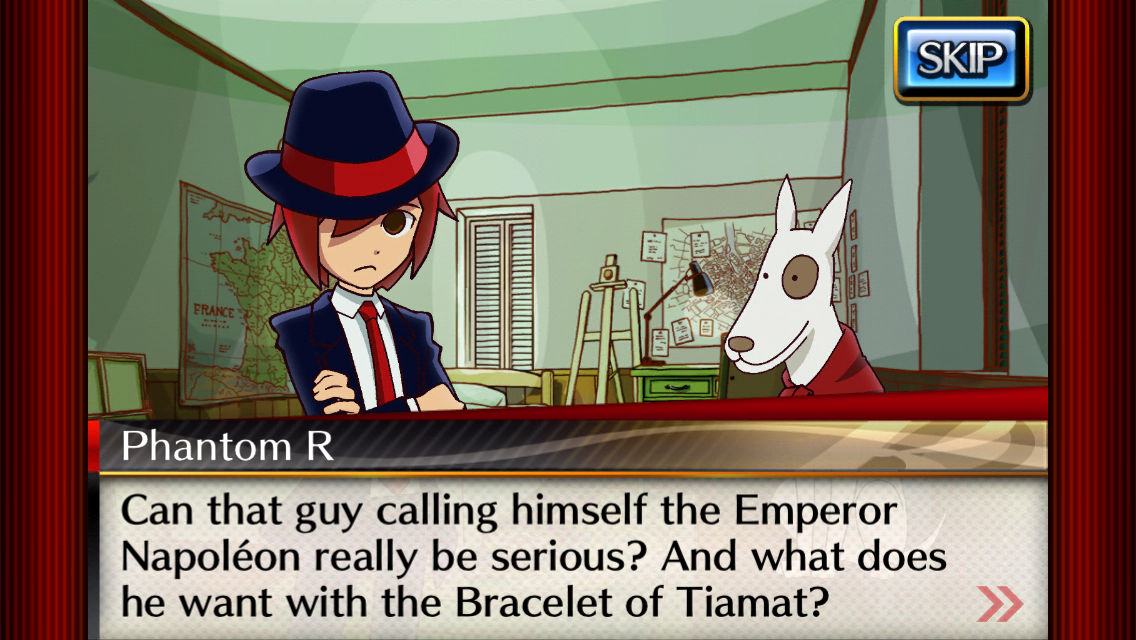 Some of the activities consist of roulette style minigames that net you free loot, and a number of them are skill-based games that task you with certain time restricted goals, like “tap the right picture eight times" or “find the icon." There’s a decent selection available so you won’t get bored, and the randomized nature of the boards ensure that you’ll be doing something different constantly.

The crux of the game involves actual rhythm sequences, like dancing on the streets of Paris or sneaking through an art gallery at night. All of these are played out by way of the touch screen, which brings up certain prompts that are specific to that sequence. Think “Dance Dance Revolution arrows" and you’ll have a good idea of what to expect. It’s all good fun, and they’re over pretty fast so they don’t overstay their welcome — not to mention, the touch-based controls are pretty flawless. 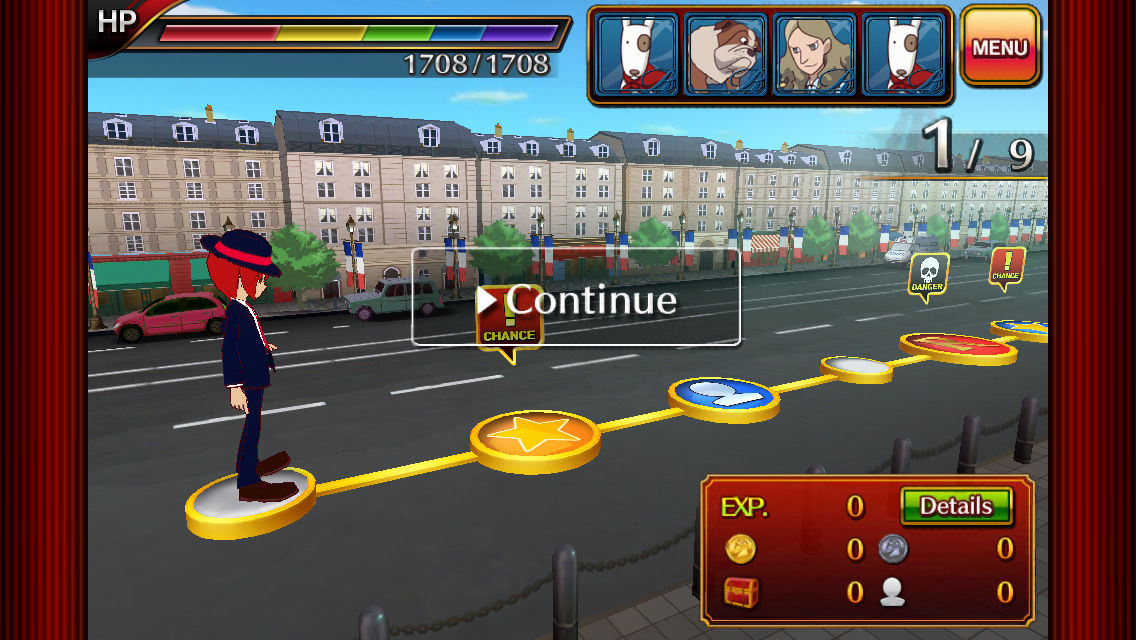 The Paris Caper also adds some social features to the game, most notably “accomplices," which are basically equipment you can add to Raphael’s arsenal. These icons take the form of characters throughout the game, and they buff your character in certain ways, like adding more “HP" (more leeway to screw up during minigames), or other statistics. The good news is you don’t really need them, but you can also level them up, which adds a unique element to Rhythm Thief that wasn’t really there before.

All things considered, the IAP in the game isn’t all that bad. There’s a in-game shop where you can purchase items by way of the core currency you earn by completing stages, and the other currency — “R Tokens." These are a premium only coin that allows you to purchase certain items and extra levels, which can be basically considered DLC.

The good news is the vast majority (if not all) of the shop’s offerings are optional, and have no real bearing on the game. There’s also a ton of “extra" missions that cycle in periodically for free, so you won’t be at a loss for things to do when you consider the fully featured campaign. 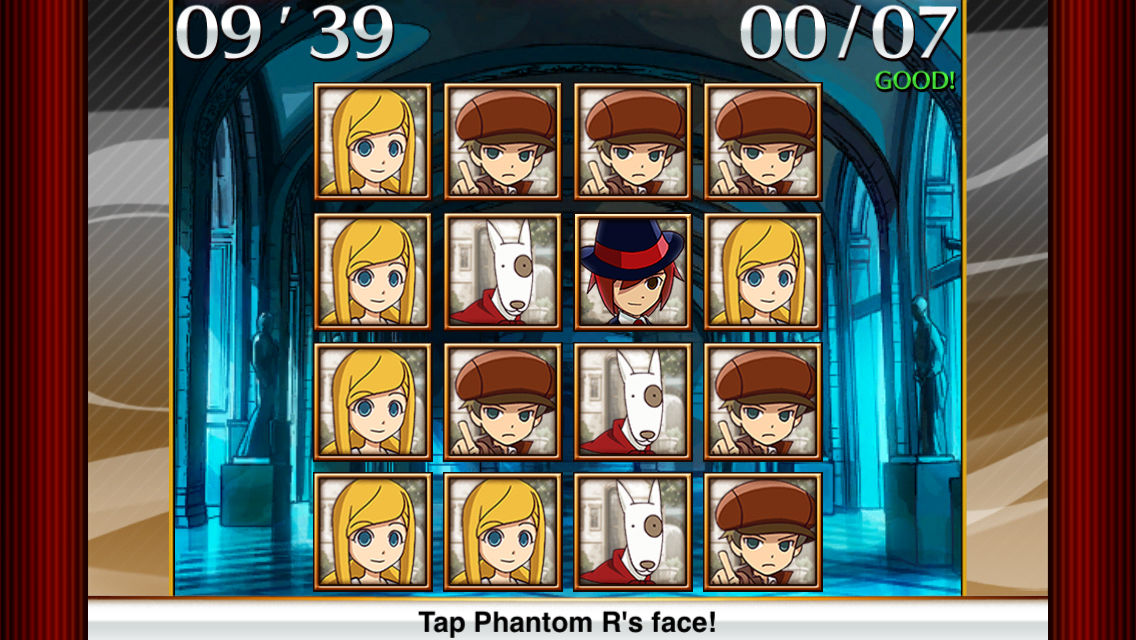 There’s just one major problem — The Paris Caper requires you to connect to the internet to play the game. If you try and load it up in airplane mode or without service, you’re out of luck. To add insult to injury, the game even warns you that “playing in a low service area can result in a corruption of data." Yikes!

To make matters worse, Sega has even had launch day issues with the game, and when they pulled it from the App Store for maintenance, players couldn’t connect even with a working internet connection. It’s a glaring flaw of this otherwise incredible package that needs to be patched out immediately. It would be more understandable for a freemium game, but for something priced at a premium rate, it’s ridiculous.

Barring an incredible odd decision to force players to stay online to play it, Rhythm Thief & The Paris Caper is one of the best rhythm games on the mobile market right now. It has a ton of charm, a heap of content, and easy to use and intuitive touch controls. If you’re a fan of anime style games (Lupin III in particular), it makes the decision to pick this up even easier.