Thanks for checking out our Papa Pear Saga guide! If you’re a free to play gamer and want to learn how to win these games without spending real money, be sure to check out our guides for other top games:

If you read my review of King’s latest puzzle game on iOS, Papa Pear Saga (Free), you know that I wasn’t quite as enthralled by it as I was with Candy Crush Saga (Free). That said, it’s not the worst stop-gap for Peggle ($0.99) fans who are waiting for the next installment on their mobile device, so I’m sure some of you will be playing it. With that in mind, I’ve put together another one of my guides to help you play Papa Pear Saga a bit more effectively and avoid the siren’s call of spending real cash on boosters. Relative to the other games from King, Papa Pear Saga is early on, so there aren’t quite so many levels at the moment. I’m going to keep my advice general for the most part so that it will continue to be useful even as King adds more to the game.

Papa Pear Saga is a bit different from the other iOS puzzle games from King in that you can actually earn almost all of the boosters during play by performing certain tasks. It goes without saying that you should look for opportunities to earn a helpful booster whenever you can. Here’s a list of the various power-ups and how to get them.

Fire Pin: This power-up basically creates a halo around your pear that will remove any pins it comes in contact with. Its pin-clearing ability makes it a great fit for the levels where you need to collect a certain amount of vegetables. It’s also very useful in levels with pear-destroying spikes, as it will burn off the spikes and render them harmless for the duration of the game. You can create a Fire Pin by bouncing a pear off one side of the screen and having it reach all the way to the other. It’s okay if it makes it there by bouncing along vegetables, so long as it touches both sides.

Grande Pin: Super-size your pear with this useful power-up. When you collect this, your pear becomes huge, great for knocking out more pins and pushing the big fruits around in stages where you have to drop the fruit into the buckets. Create this one by bouncing a single pear 50 times. This is one of the harder ones to earn during play, but if the stage is populated with enough pins and indestructible bamboo shoots, it’s doable.

Double Pin: This power-up splits your pear into two, which is useful in every level but particularly valuable in stages where you need to light up all the buckets. Try to hit this power-up at an angle so that your double pears don’t fall in the same direction. You can earn this one by bouncing a single pear off the edges of the buckets five times. For how useful this item is, it’s pretty easy to earn and you’ll likely get them without even trying a lot of the time.

Wake-Up Pin: This power-up has a very specific use. It lights up one of the buckets at the bottom of the screen. Naturally, this is very useful in levels where you need to light up all the buckets, but not so useful anywhere else. It’s easy enough to make, but the cost is high: simply fire seven pears into the same bucket to make it appear. If you have one stubborn bucket left along with eight pears and you don’t think you’re going to be able to make the shot, it’s worth firing seven of them into an easy-to-reach bucket for this one.

Multiplier Pin: While it lacks the razzle-dazzle of the other power-ups, hitting one of these pins will increase your score multiplier. Given that stages have score requirements, this little fellow is always welcome. You’ll find these scattered in stages automatically more than any other power-up, but if you want to earn one, you’ll have to clear out every single specimen of one particular vegetable or fruit. In sparsely-populated stages, this isn’t too hard, but in the crowded stages, this is pretty hard to do.

The game will issue you a sampler of each of these power-ups in particular stages. You can use them to create a pin in the next stage you play, but be careful, because the game is never going to give you any more of them. Unless, that is, King decides to implement a power-up roulette like they’ve done in Candy Crush, but you shouldn’t count on that. Save them for when you need them most, and use them wisely. Wasting a Wake-Up Pin on a level whose goal doesn’t involve lighting up buckets isn’t a wise use. 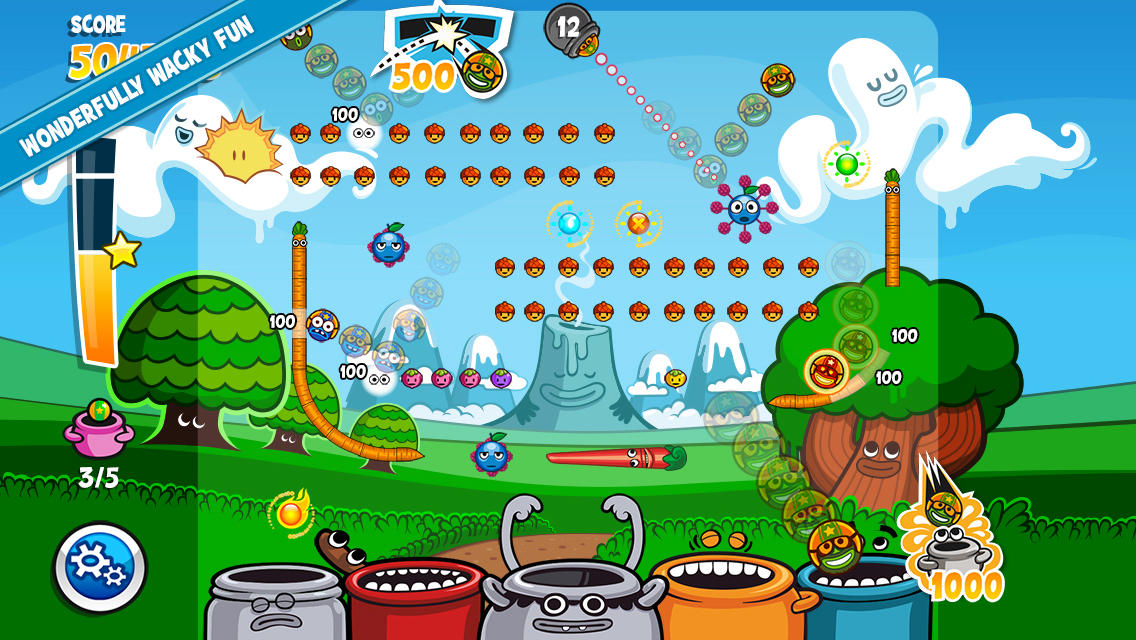 Like other King games, Papa Pear Saga features a variety of goals that differ from stage to stage. This is perhaps its biggest differentiating factor from Peggle, and you’ll need to approach each stage type a bit differently. Here’s a list of the types of goals.

Light Up The Buckets: The goal in these stages is to drop a pear into each of the buckets at the bottom of the screen. The buckets will sometimes have lids on them that you need to hit a few times and break. Which buckets have lids will actually change every time you play the level, so it’s possible to end up with an easier objective by chance. Make the most of each shot on these levels. It’s not that important to clear pins unless they’re directly blocking a good shot on a tricky bucket. Remember that if you’re having trouble with one particular bucket and you have enough pears to burn, you can create a Wake-Up Pin by dumping seven of them into an easy bucket.

Clear X Vegetable/Fruit Type: This is pretty straight forward. You have to clear a certain number of a particular type of pin. Your progress is displayed at the side of the screen. Early on, you don’t have to clear all of them, so feel free to go for the easier ones. Later on, you will need to get nearly all or all, so plan your shots carefully. If you’re only getting one pin with one pear, you’re failing. Make a Double Pin or a Fire Pin to help you out if you’re having a lot of trouble. These stages are definitely the hardest ones in the game so far.

Drop The Fruit Into The Buckets: Large fruits are placed around the board, and you need to knock them down into any bucket. These stages aren’t too hard, just keep your goal in mind. You can push the fruits a little with your pear, but it’s far more effective to remove the ground from under them. A smart move is to use your first few pears to clear a funnel shape towards one of the buckets and then try to pick off pins in such a way that the fruit will fall down your funnel. Most of the power-ups are very useful in these stages, since the more pins you clear, the easier it is to get the fruit down.

Score X Points: Very straight forward, simply reach the number of points the game requests. Make sure you make full use of any Multiplier Pins laying around the stage, and keep in mind that if you bounce a pear off the top of the stage, you’ll earn some bonus points. Always aim high to get the most out of your shots, and look for chances to make Fire Pins. Most stages will have a point barrier you need to break in addition to other goals. In those stages, keep in mind that if you clear the main goal, your remaining pears will be fired off in a Papa Fiesta and rack up a fair number of points, but you’ll want to make sure you’re pretty close to the score cap before finishing up the main goal.

Collect X Type Of Power-Up: You need to collect the designated number of power-up pins the game requests. Sometimes there are enough placed in the stage at the beginning. Sometimes, though, you’ll need to provide them yourself. Familiarize yourself with how to make each of the power-up pins and focus, focus, focus. These can be some of the nastiest stages in the game depending on what it’s asking for. 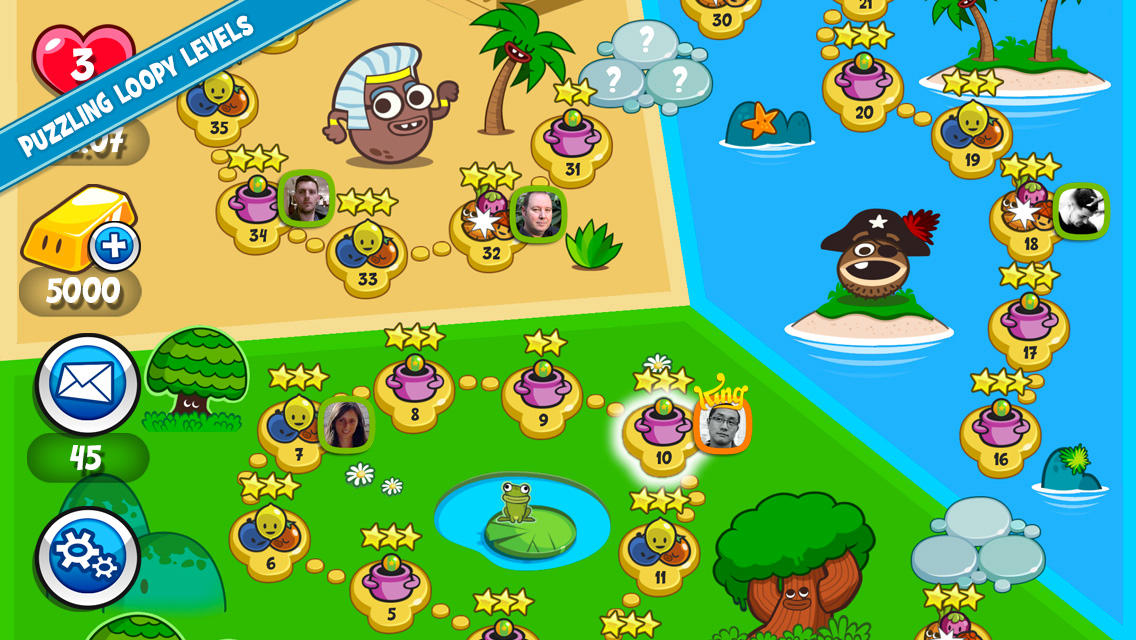 Pay attention to the power of your shot, not just the angle. This is one way Papa Pear Saga differs from Peggle, so it’s easy to forget about it. Sometimes a soft lob is far more useful than a full-powered blast, especially when aiming for specific targets like buckets.

Aim high. You have a higher chance of hitting more pins, racking up more points, and clearing more obstacles if you start with a pin placed higher in the field. This is good advice in Peggle and it’s good advice here, too.

You can fire up to three pears at once. Don’t forget this, because it’s very useful for creating power-ups. You can give a bit more bounce to a pear you’ve already fired by hitting it the right way with another.

Don’t fire off all of your pears into the air in rapid succession whilst yelling “ARRGHHH". This is not Point Break, and you are not Keanu Reeves. Each pear is valuable, so plan your shots carefully, and don’t waste them. King isn’t big on giving players a margin of error.

So to all you brave souls out there passing your time by throwing what are clearly peas, not pears, at other vegetables, good luck. Hopefully these tips will help you out while you kill time waiting for a certain game to un-exclusive itself. As for me, I’ll have to wait for King to update with some new stages, so it’s back to the candy mines.