In the relatively short time electronic gaming has been around, the industry has seen several games that managed to catch on in such a big way that they took over the hobby for a period of time. Many of these are remembered well today, even by people who weren’t into gaming at the time. Nobody forgets Super Mario, Street Fighter 2, Doom, or Grand Theft Auto 3. Still, there are a few truly huge games that, for whatever reason, seem to have slid into slight obscurity over the years. The series falls dormant, either due to the publisher disappearing or sales falling off, and soon, games that shifted the entire course of the industry fall between the cracks. Double Dragon seems to be one of those games.

A wildly successful reinvention of a genre that sorely needed it, Double Dragon not only gave beat-em-ups a shot in the arm, but the arcade scene in general. Its success paved the way for a bevy of brawlers, including Final Fight and Streets of Rage, and the franchise became so popular that it had its own comic book and cartoon. It all culminated in what is arguably Scott Wolf’s second-most successful acting role and a true Hollywood masterpiece. And then, it all went away, just like that. The one-on-one fighting game boom, heralded by Street Fighter 2, effectively killed the stagnating beat-em-up genre, a trend Double Dragon pitifully tried to follow to little success. The creators of Double Dragon, Technos Japan, went bankrupt in 1996 and their franchises disappeared with them. 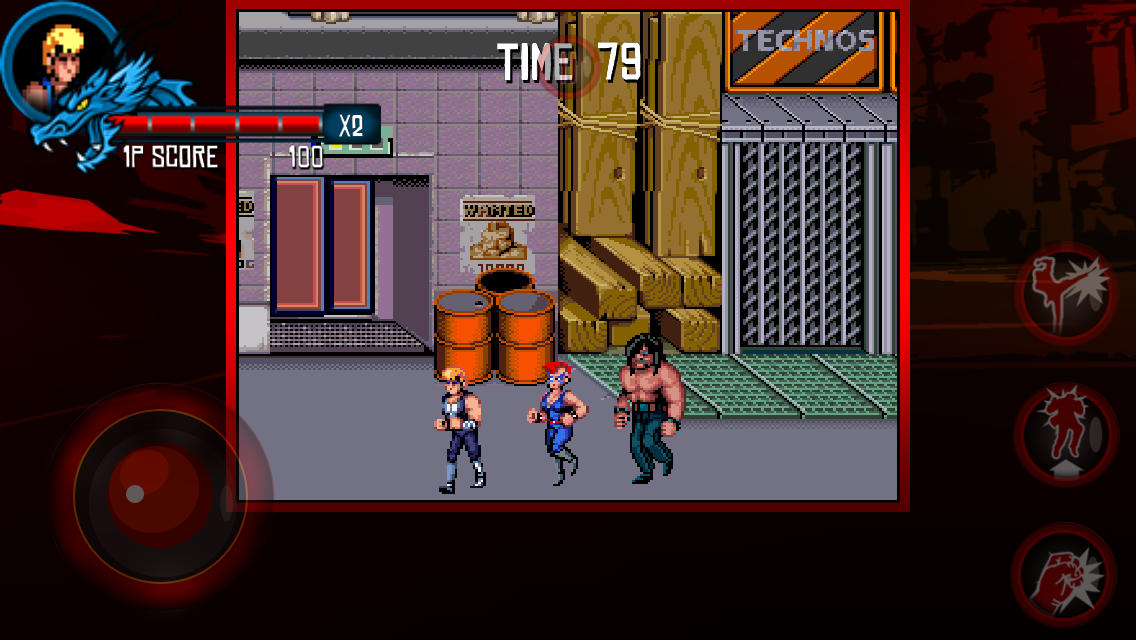 A new company named Million was formed, made up of ex-Technos Japan staff, and picked up the rights to that company’s franchises. They’ve taken a couple of tries at reviving the Double Dragon brand, but nothing has really caught on. One of the cool things about Million, though, is that they’ve been really good about licensing their franchises out, which I suppose brings us to the topic of this review. Double Dragon Trilogy ($0.99), the first collection of the games ever released, brings us arcade-perfect ports of the first three Double Dragon games courtesy of DotEmu. Surprisingly, for how many times they’ve been ported around, this collection represents only the second time the first two Double Dragon games have received arcade-perfect versions, and the first time we’ve ever had an arcade-perfect port of Double Dragon III. There’s probably a reason for that last one.

I think a lot of gamers are familiar with the arcade version of Double Dragon. As would become the pattern for the series, the very popular NES version was quite different, but in the case of this first installment, the arcade game was widely distributed, ported, and remade, so you’ve probably played at least one version of it, possibly even on iOS. What can be said about it? It’s a great game that holds up fairly well even today, although it feels a bit limited compared to the games it inspired. Using a surprisingly large arsenal of moves, you’ll brawl your way through four stages packed with enemies looking to use you as a punching bag. Some enemies come to the fight with weapons, but if you knock them down, you can pick up those weapons and use them as your own. Pretty standard now, but at the time, that was new.

At the end of each stage, a tough boss awaits, and if you’re playing co-op, the game ends with an epic showdown between the two players for the hand of Marian. It’s kind of a brief game, but it’s not hard to see why it was so popular. DotEmu’s take offers two modes of play and three difficulty settings. Arcade mode gives you the game as it was originally presented, giving you one credit to make your way through to the end of the game. You may not insert coins to continue, so getting to the end of this mode is pretty tough, even on the lowest difficulty setting. The second mode is Story mode, which works almost the same as Arcade mode, with the exception of allowing you to choose to start from a stage once you’ve reached them. You still get just the one credit, but with the level select, this mode presents a reasonably fair challenge. If you’ve got a local friend, you can play co-op via Bluetooth, which makes the game a lot easier and more fun, to boot. 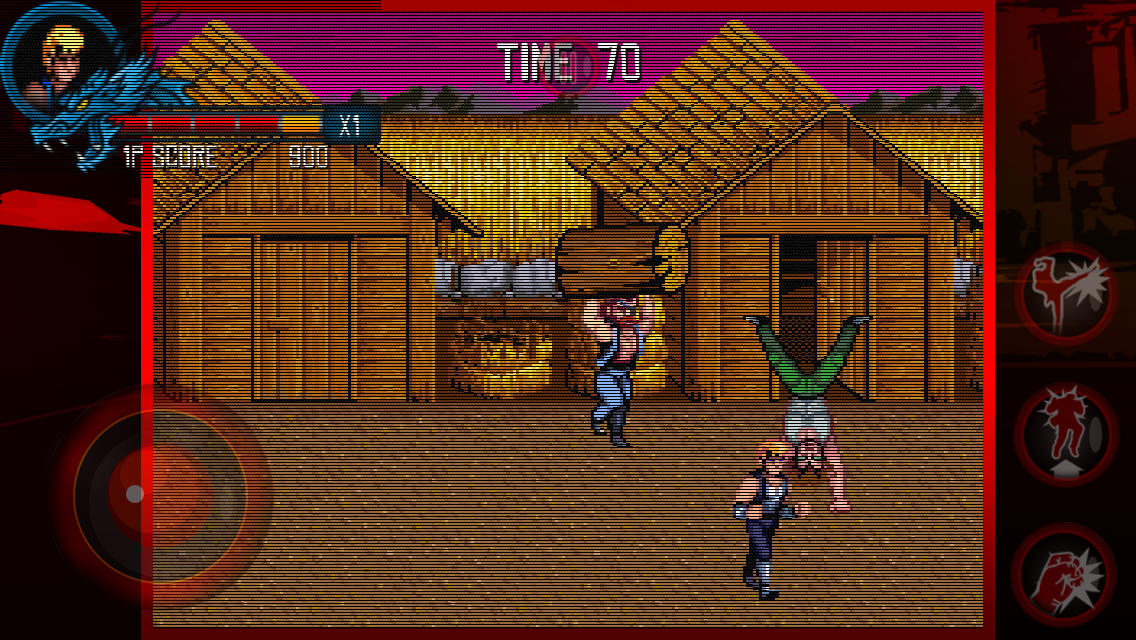 Double Dragon II is where the series starts being more famous for its NES ports than its arcade versions, I think. The massive popularity of Double Dragon had the publisher chomping at the bit for a sequel, leading to a rushed one-year development cycle for the arcade version. As such, it’s more of a remake than a real sequel. The graphics are slightly improved, particularly in terms of animation, some new moves were added along with a change-up in how basic moves worked, and a few new enemies were added. The game’s four stages frequently reused entire sections from the first game in a new palette. At least the bosses were mostly new. The NES version of the game had a lot more development time behind it, and in my opinion, it’s considerably better than the arcade version in every way. Still, the core of the game is just as fun as it was in the first.

The options for this game are the same as the first, and getting through the game on one credit is again quite the challenge. Effective use of weapons is a must, but it is doable. Just remember that throwing knives one-shot a lot of the bosses and you’ll do alright. You get one more life here than in the first, probably because unlike the first, you can’t earn extra lives by reaching certain scores. As with the first game, I think most people will find the game manageable in Story mode, if Arcade mode proves a bit rough. Perhaps an unambitious sequel, but it’s nevertheless a good game. The same, sadly, cannot be said for the last part of this collection.

Double Dragon III is an arcade game that I think not many people had a chance to play in its original form. It was a rushed effort meant to capitalize on the pending movie. The original development team was occupied, so this one got outsourced to a less-than-satisfactory team. The worst part of it all is that the movie it was rushed for ended up being shelved for years. For all the people who complain about IAP in games today and how it affects the design, lamenting for the old days when none of that stuff influenced games, this one’s for you. Arcade games, of course, were always designed with the odds against the player, in order to promote gaming’s original IAP, the “Insert Coin To Continue" IAP. Double Dragon III took things to a whole new world. 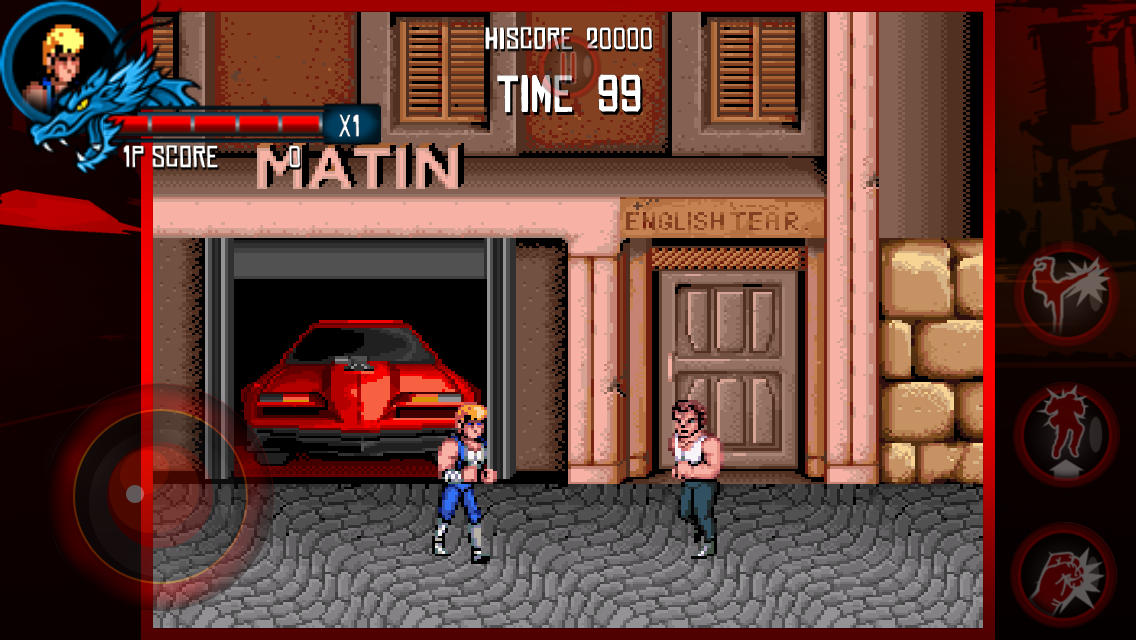 In this game, the brothers are traveling around the world collecting stones for whatever reason. You get five big stages in this one, and nothing is reused from the prior games. The graphics are completely new, though in my opinion, the game looks a lot worse than the other two, and its natural speed is slower and more choppy than them. It did add a few cool new things, though. First of all, you could play three players, with long-lost Lee brother Sonny. Secondly, you could unlock new characters with entirely new movesets and playstyles. Characters and weapons could be bought in shops you would find at the start of each stage. By ‘bought’, I mean with real money, of course. There was no in-game currency to collect, so each character and weapon had to be purchased by dropping a fresh quarter into the coin slot. Weapons could no longer be found in the stages, but had to be bought. Oh, and you only get one life per credit this time.

Double Dragon III was, quite simply, a money-sucker on a level gamers had never before seen. Luckily, it’s kind of a terrible game anyway, so most people had no trouble avoiding the temptation of the game’s absurd payment scheme. Amazingly, the series’ original developers managed to take some scraps from this pile of garbage and put together a pretty good NES game, but this collection only includes the arcade versions, so that doesn’t help us any. Now, here’s a funny sequence of events. Double Dragon Trilogy, across the board, does not allow you to simulate the insertion of a coin. In the previous games, this means you can’t continue, which makes the games a lot harder, but otherwise doesn’t affect the games. On the other hand, in Double Dragon III, it means there is no way to purchase the weapons or extra characters. So, one of the first games to include extra content in the form of IAP has an iOS version without IAP, making that original content inaccessible.

In addition, Double Dragon Trilogy only supports two players via Bluetooth, so there’s no way to play the game’s three-player mode, even if you wanted to. Even in its original form, this game is pretty lousy, but thanks to these exclusions, it’s even worse here. I can sort of understand not wanting people credit-feeding their way through the games, but the impact of that on Double Dragon III tells me DotEmu either didn’t think things through or just thought people wouldn’t care since the game is hot garbage. Either way, this game is likely only here for completion’s sake, so you’re better off thinking of this more as Double Dragon Duology. 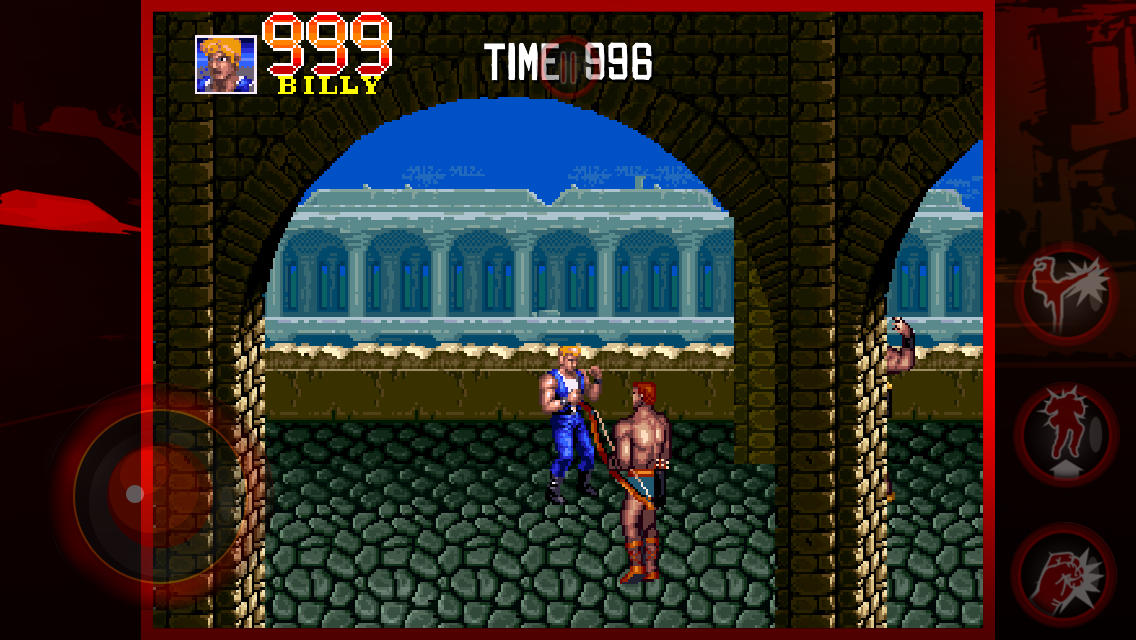 The emulations are up to DotEmu’s usual standards, with options for choosing between remixed and original soundtracks, adding scanlines, removing filtering, changing button sizes and opacity, and changing the aspect ratio. There is also an assortment of Game Center achievements to earn. The touch controls don’t work as well as I’d like, so if you’re using them, you have to be really careful near pits and other such instant death spots. Pulling off some of the more complex moves in the latter two games is a pain, too. Fortunately, there is iCade support, so if you have one, you’ll be all set. The developer is working on iOS7 controller support, but it’s not in there yet.

It’s also worth noting that the touch buttons are bananas on iPad Airs at the moment. By default they’re huge, and trying to change the size makes them super-tiny. I’m sure this bug will be fixed soon enough, but iPad Air owners should be aware of it. It’s also extremely resource-intensive, so if you’re playing on an older device, you’re going to want to close off pretty much everything else running on your device to avoid crashes, sound problems, and slowdown.

Double Dragon Trilogy has some serious problems. A lot of those are inherent to the games themselves, and I’m going to be honest and say I’d rather have a NES trilogy than an arcade trilogy for this series. Add in touch control problems and the consequences of the odd choice to cut coin-slot operations, and you end up with a flawed collection of a set of games that already had plenty of issues to go around. If you have an iCade, I think this set is definitely worth it for the first two games alone, but otherwise, this one’s really just for diehard Double Dragon fans. Everyone else should just celebrate by playing one of the hundreds of beat-em-up games on the App Store that only exist because Double Dragon blazed a trail more than 25 years ago.