This might be a first for our Game of the Week choices, but this week’s pick is actually a game that wasn’t even featured in out weekly Out Now post. This week’s post was chock full of awesome games, but D-Pad Studio’s Savant – Ascent ($1.99) wasn’t one of them. But why? How? What the heck is going on in this topsy turvy world? Well, Savant has kind of a rocky release history. It originally launched by accident in early November, and while these sorts of things can happen it was particularly bad in this case as the build that was released was unfinished.

There had been a lot of anticipation for Savant since we originally posted about it last July, and especially since an Android version has been available as part of a Humble Bundle for several months. So people were super anxious to get their hands on an iOS version, only to discover the one released in November was a buggy version with awful controls. Thankfully, the developer jumped in on the conversation in our forums and let everyone know that it was an accidental release and that the proper release version would be coming soon. And this week, that final release version showed up, but due to its wonky release it slipped past our Out Now post. However, just because it missed out on the release party doesn’t mean it’s to be dismissed. Savant – Ascent kicks all sorts of ass. 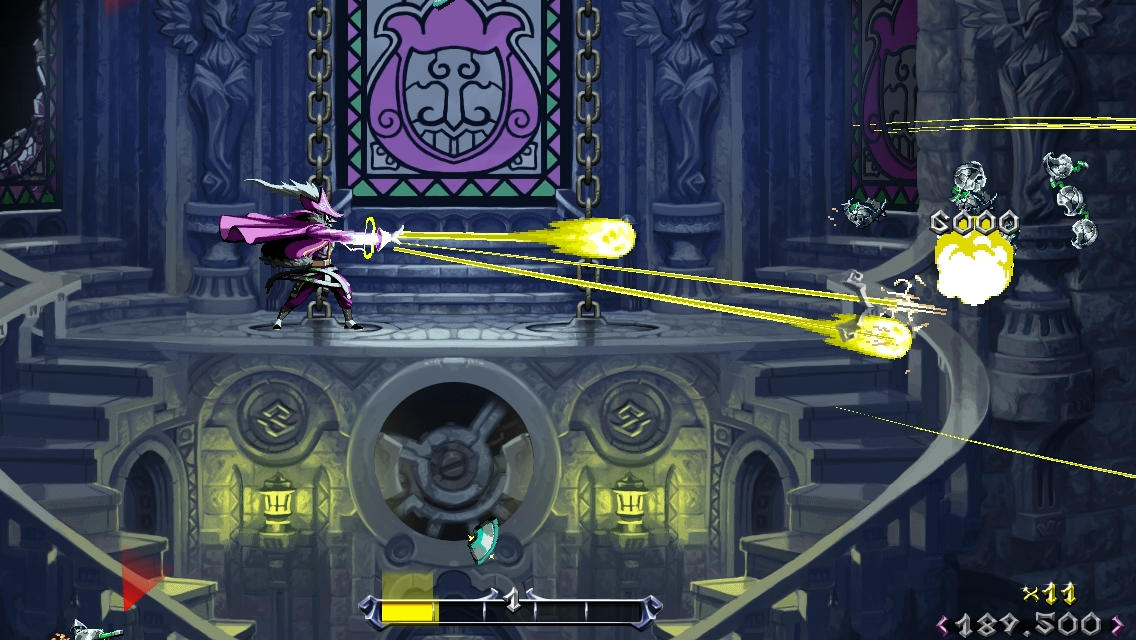 The mechanics of Savant are pretty simple. You’re Savant, who besides being a video game character is also an established electronic musician who provides the soundtrack for this game, and you’ve been ousted out of your own tower by an evil orb and now must fight your way back to the top floor-by-floor to take back what’s yours. Savant is mostly a stationary shooter, though you can dodge back and forth between two positions via an onscreen button or a swipe in the direction you’d like to dodge. And boy howdy will you need that dodge. Waves upon waves of enemies will attack your position, and you’ll blast the crap out of them using a directional stick, pointing it in the direction you’d like to shoot up to a full 360 degrees. The flow of the enemy waves and the shooting reminds me a lot of another frantic arcade shooter Ziggurat, and in fact one poster in our forums describes Savant as “Kind of Ziggurat meets Knightmare Tower with some Castlevania style art direction" which I think is totally spot-on.

While you’re busy blasting the crap out of stuff, you’ll also occasionally unlock a piece of a CD which you’ll need to actively snatch out of the air using your chain-whip-grappling-hook thingy. (CDs, or compact discs, are what music used to come on before digital music destroyed them, in case you’re not in the know.) Every fourth chunk of CD you collect will unlock a new power-up which you can then use in subsequent games to continue blasting the crap out of stuff. Those CDs also unlock new Savant musical tracks that will play during the game. I wasn’t a fan of Savant before the iOS game came out, but I’m definitely digging the tunes, and despite how the music comes off in the official trailer below it actually fits with the game perfectly. Of course, this type of music might totally not be your thing, but it works with the personality of the game well.

Savant is challenging, but it’s not a terribly long game. Before long you’ll be finished with the Story mode, but don’t fret, as that will unlock new Time Attack and Endless modes. If you enjoy the core gameplay of Savant, as I and many others have been, then these additional modes should be reason enough for the game to live on your device for quite some time. There’s even a semi-hidden “Vario" mode, also unlocked by beating the game and toggled by tapping the face on the main menu, which gives you a new style main weapon to play with that shoots strange Mario-esque fireball things. I guess those are Varios? Anyway, it changes up the game enough that it feels significantly different playing through the game again in Vario mode, so there’s definitely plenty of replay value in Savant.

Bottom line: Savant – Ascent is a very well-constructed, fairly hardcore arcade shooter, and if you’re into that sort of thing, you should definitely make sure it’s on your radar. It has some quirks, like no pause during play and no real menu system to speak of, and while the controls have been greatly improved over the accidentally-released version it could still use a few more options, but I’ve been obsessed with it since I discovered it officially relaunched yesterday and I imagine it will eat up most of my free time this weekend. Don’t miss out on it.