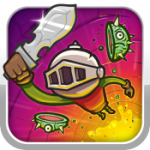 Friggin’ Knightmare Tower ($2.99) found me again. I thought I was safe when I managed to wrest myself from its previous browser incarnation. But lo, Juicy Beast had to port their quintessential launcher title over to Unity3D and iOS and the cycle found rise once again. Now sporting a new engine, a fresh coat of paint, and some rejiggered mechanics and UI elements, it’s ready for the App Store IAP free.

It goes like this. A gaggle of princesses are trapped in a seemingly endless spire, and our anonymous hero has taken it upon himself to bust his way in there and save some dames. Because they’ll totally lavish him with attention if he does.

His method of ascension? Jockeying a rocket and extracting further upward momentum from the resident monsters. A quick bisecting slash on his way up and those sweet, sweet Newtons are his. Somehow. 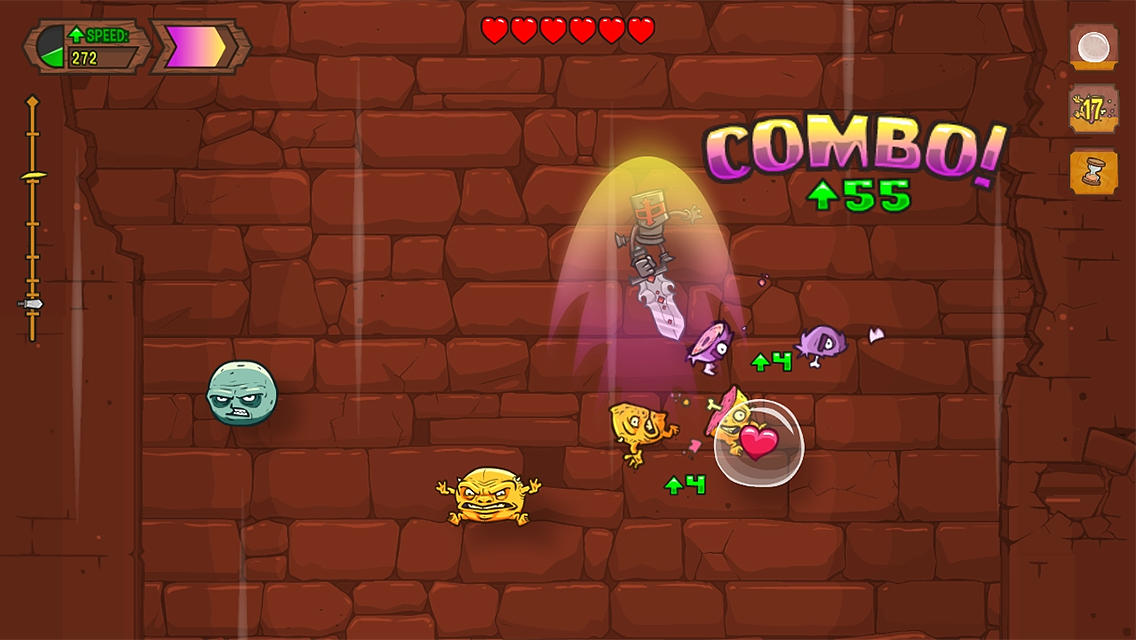 The knight maintains a net creature-fueled speed at constant risk of falling off screen. Tilting the device sails the knight between the edges, positioning him for a downward dash attack at the tap of a finger. Successful strikes keep him bouncing and safe from a fall’s speed penalty. Climb slowly enough and the inexplicable rising lava will engulf you.

Monsters range from angry but harmless to winged and laser-armed. Most of these have a vulnerable spot, projectiles, spikes or somesuch. A mix of approaches, timing, and bullet-hell style dodging is necessary for survival. You needn’t wait for lava to kill you.

In motion, it’s frenetic, silly, and addicting. Deceptively deep, it’s simple to play yet demands enough finesse and skill to keep it engaging. My longing for a mouse quickly faded as perfectly consistent tilt controls wormed their way into muscle memory. Powerups and bombs provide pacing and intermittent bursts of breathing room, while upgrades and quests represent constant carrots. A slightly goofy sense of fun bleeds through the colorful art and animations.

The only downside, as I see it, is a proliferation of meme references. This is a matter of taste, sure, but I’d say it’s laid on a bit thick. Music’s fine, but the repetition may wear if you’re blasting through the game in a single sitting. It’s hard not to.

Knightmare Tower doesn’t so much drastically wring minutes out of you as much as it quietly and neatly absorbs them. Less painful extrusion, more fluffy sponge. Time and obligations blithely fade into the background, their importance blunted. I should probably tend to the coffee in my press, slowly bittering, but… eh. It can wait. I didn’t really need to get off at that stop.

Watch yourself with this one. It can easily relieve you of an entire day.