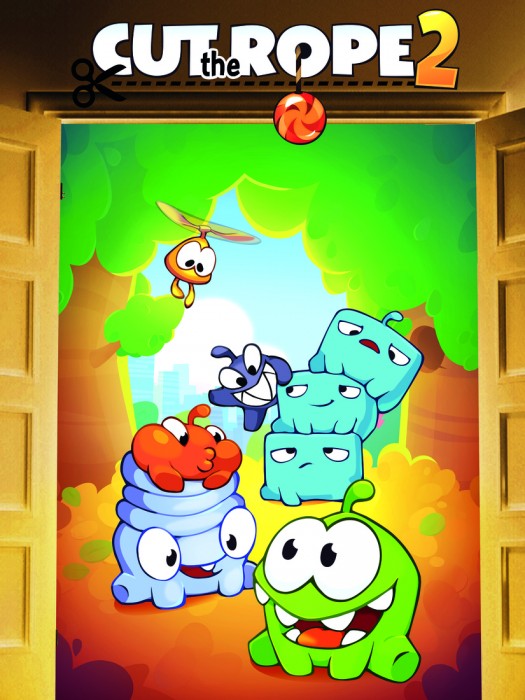 After the initial announcement in September, and subsequent teaser in November, ZeptoLab has finally revealed to Polygon that that Cut the Rope 2 is set to launch on the App Store this December 19th, exclusively for iOS devices. The original Cut the Rope became an overnight success back in 2010, as all walks of gamers found a lot to love in strategically slicing ropes to land yummy candy in little OmNom’s mouth. That success sprung forth two spinoff titles, Cut the Rope: Experiments in 2011 and Cut the Rope: Time Travel earlier this year. Those spinoffs seemed to do quite well too, and each added brand new elements to the tried and true Cut the Rope formula. Which left us wondering what ZeptoLab would be able to do that makes Cut the Rope 2 feel like a fresh, proper sequel.

In talking to Polygon, ZeptoLab’s CEO Misha Lyalin discussed what some of these changes will be, stating “We wanted [Cut the Rope 2] to have very new game mechanics, and we felt that this is a very different game, so it deserves a number 2." The main differences this time around with the sequel seem to center on interactive environments, brand new helper characters in levels, and a greater focus on the storyline.

For example, Polygon played a forest level in Cut the Rope 2 which featured a series of platforms, all hung up by ropes. The goal was to strategically cut the ropes in such a way that the candy sitting on the top platform would be able to roll down the level’s other platforms and end up in OmNom’s mouth. The forest levels also included things like balloons which could be used to raise a platform, and a helper named Roto whose ability to fly could help OmNom get his cherished candy.

All in all it sounds pretty interesting, and I’m hoping that ZeptoLab is true to their word in that they’ll be bringing significant new mechanics into the Cut the Rope formula with the sequel. Time Travel and Experiments were both great games, and more of a good thing is fine by me, but I’m definitely ready for something truly fresh in the Cut the Rope series. We’ll find out soon enough though, so mark your calendars for December 19th just before the big iTunes freeze when Cut the Rope 2 lands in the iOS App Store.