Back in the day when our brains were just in their formative years and we didn’t have a mobile, touchscreen device to entertain us, we could entertain ourselves with nothing but a pencil and a piece of paper from a notebook that should have been used for studying. Tic-Tac-Toe was the favorite in my circle of friends. At that age, it didn’t require a long setup for a single game like a round of Dots and Boxes or enough book smarts to make a big enough challenge for a game of Hangman. It was my first introduction to strategy games and a new turn-based puzzler has not only brought it back but they’ve found a unique way to make a deceptive and entertaining challenge.

Tic-Tactics (Free), the latest from Hidden Variable Studios, injects a big, batch of anabolic steroids into the classic paper game by giving it a bigger playing field and a chance for strategy that looks simple but can be more complex than it appears.

Just like the original Tic-Tac-Toe, the goal is to get either three X’s or O’s in a row just like the typical nine-grid game but in this game, there are nine grids on the board. So the true goal of the game is to win as many of the grids as possible. The strategy part comes in the brilliant way it expands on the game’s basic design. 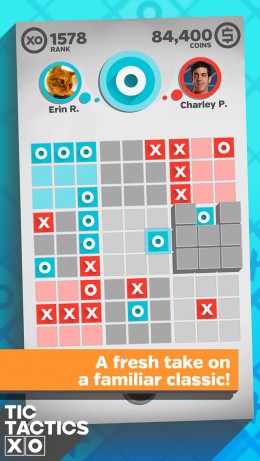 The player who initiates the game starts by throwing up nine X’s or O’s on the grids, which the game eliminates on the other grids as they are being picked so the deck can’t be stacked in one person’s favor before the game even starts. You take turns picking squares on each grid to score three in a row either horizontally, vertically or diagonally but the square that you pick also determines which grid the next player must play on during their turn.

This simple twist on Tic-Tac-Toe is how it offers its unique chance for strategic gameplay. Every time you choose a square, it requires you to think two steps ahead because you’re not sure choosing to block or set yourself up for a win. You’re also determining where your opponent will make his or her next move. If you’re smart enough, you can set yourself up for a win by forcing them to choose a square that would block one of your moves or try to set themselves up for a win. However, they could also be setting you up for a win by backing you into a corner and forcing you to make a move that would set them up for an easy win.

It also has a well thought out design. Turn based games have a tendency to be ignored leaving some matches unfinished if one player forgets that the app is on their phone or tablet. The game gives players a set time limit to respond to each move and gives the win to the other player if time expires so matches don’t languish in the system and players don’t start random matches with people who forget to play them. It’s also got a slick, minimalist design that manages to make X’s and O’s mildly interesting to look at, no matters how many times you played it.

Its true beauty is in its simplicity. It has a unique strategy element that looks deceptively simple but offers a quite complex system of strategies and moves depending on how far you can think ahead. It’s one of those rare strategy games that anyone can pick up and play and find an infinite number of ways to tackle its challenge provided that they know how to play Tic-Tac-Toe.