Illusion Labs is something of a model iOS developer. They don’t release a ton of games, but when they do release one, you can expect nothing short of top-notch production values, impressive visuals and brilliant use of the iOS platform’s strengths. All those hold as true as ever in their latest release Touchgrind Skate 2 (Free). The original Touchgrind , released way back in 2008, was a showpiece for what was possible with an iPhone in terms of gaming. It featured fantastic 3D visuals and a great physics system, but it was really the multi-touch capabilities that made it stand out. Using your fingers as little virtual feet to manipulate a virtual skateboard offered an unprecedented level of interaction and closeness with the game that couldn’t be matched. 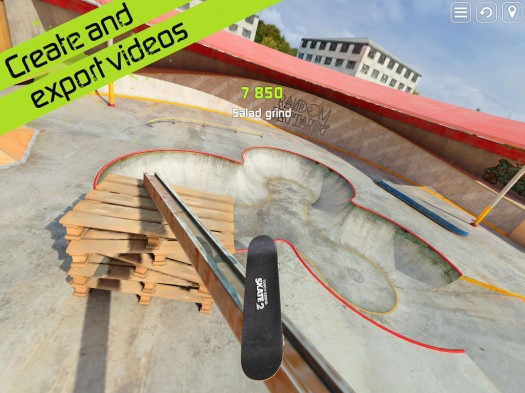 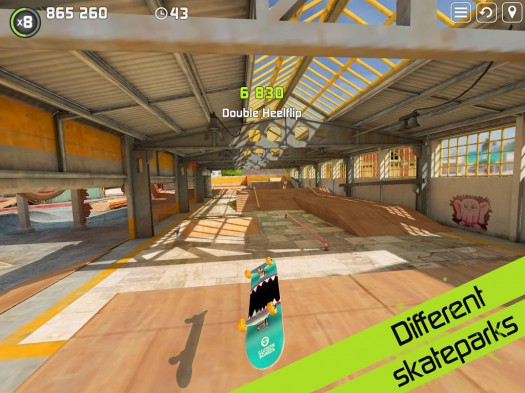 The only real problem was that Touchgrind was a pretty difficult game. Its trick system had a fairly steep learning curve, but not one that couldn’t be overcome with some practice and dedication. The larger problem was the game’s perspective. It was strictly top-down, which was a great way to easily interact with the board but was a horrible way to ever tell where you were going in a level. Due to that, the “game-ness" of Touchgrind suffered, and it ended up feeling more like a glorified tech demo.

That’s all changed with Touchgrind Skate 2. The camera has shifted back to a 3rd-person perspective, allowing you to see where you’re going and what objects you’re approaching but still offering a skateboard model that’s easily accessible to your fingers. It really does make it feel like an entirely different game, but it still retains that closeness and level of interaction that made its first iteration feel so special.

Also, there’s a hefty amount of challenges to complete in each of the game’s three levels, as well as an asynchronous online multiplayer mode and high score medals to earn which means there’s plenty of “game-ness" here for those looking for stuff to beat. That doesn’t mean you’ll beat it and forget it, though, as there’s still un-timed free skating so you can get lost just trying tricks and testing what’s possible for as long as you like. A simple replay system means you can share those awesome moments with everyone.

However, one thing that hasn’t changed a whole lot with Touchgrind Skate 2 is the controls. This is still an incredibly difficult game to master, and the first few times I tried playing ended up in sheer frustration as I couldn’t for the life of me get the board to do what I wanted it to do. An in-depth tutorial system helps greatly to familiarize yourself with the ins and outs of the controls, but still, it will take plenty of patience and a whole lot of practice on the player’s part before things click. Once they do click though, look out – Touchgrind Skate 2 blossoms into a world of enjoyment.

If you think you’re up to the task of learning the ropes, or you were a fan of the original Touchgrind, then Touchgrind Skate 2 most definitely should be on your radar, and it’s definitely the game I’ll be spending the majority of my free time with for the foreseeable future.