Runners are all over iTunes since Adam Atomic’s groundbreaking Canabalt ($2.99) created a complex world with simple pixels that could offer simple yet challenging gameplay. Temple Run (Free), the first breakout runner hit that launched an invasion of running games on mobile devices, gave it a nice 3D edge that may not have accomplished the same noble attributes as Adam Atomic’s indie hit but can be just as fun to play during those various moments in life when waiting is necessary.

More recently, runners have become, well, run of the mill. They play to the same young crowd and don’t offer any new edges or explore new platforms that utilize the runner concept. Of course, they aren’t about deep gameplay and mostly serve as distractions for the young and old whether they are trying to whittle the hours away in between classes at school or while carpooling to and from work. Recently, however, Slimdown Studios tried to mine some more adult territory with runners by partnering with Universal Studios to give the killer “Good Guy" doll Chucky, the star of the Child’s Play and recent wave of Chucky movies that recently went straight to DVD, his own runner called Chucky: Slash and Dash ($0.99) that’s guaranteed to be bloodier and bolder than the latest Temple Run game but that doesn’t necessarily translate to better.

The universe of Chucky’s runner takes place in the “Good Guy" toy factory that first spawned him before the spirit of a serial killer took control of him. It’s an interesting idea because the runner’s natural story is one of an escape that will never happen and making the runner a villain means he’s bound to be defeated in some capacity. So the story fits more naturally into a traditional runner. 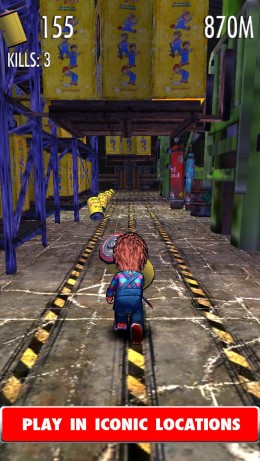 Players start by choosing between Chucky or his wife Tiffany and setting the difficulty for the run such as “normal," “hard" and the appropriately named “nightmare," which is a nice touch for a running game since most just start ridiculously easy and quickly become more challenging the longer the player lasts during each run. Like all runners, the main goal is to survive as long as possible while collecting some kind of object, batteries in this case, that they can use to purchase powerups, upgrades or extra lives for future runs. Chucky’s game offers an interesting third goal that adds a new dimension to the traditional runs: kills. Security guards are roaming the facility and if you can time your swipes just right, you’ll earn a special kill point to unlock experience points to help unlock new sharp edged weapons and kill styles.

The problem is that the execution of the game is really lousy. The first few rounds may sputter at first on older phones causing you to crash head-on into obstacles that you’re trying to jump over or duck underneath them. Once the game’s frame rate smooths out and puts you on an even, technical playing field, the movement still feels wooden and not as responsive as it should be. This is especially difficult when you’re trying to sneak up on a guard and stab him since it requires two swipes and it so poorly responds to just one.

At some point, you’ll overcome these unnecessary obstacles to reach a point when Chucky’s lanes are limited from three to just one and if the random assortment of obstacles aren’t spaced out enough, it’s impossible to get through. You’ll avoid falling off a collapsed platform to jump over a barrel but the jump space to overcome both feels like it’s the width of a hair in order to land after jumping over one and overcome the second. It should be noted that this happens on the “normal" setting.

Trying to make a bloody or even a mature rated running game is an ambitious attempt and using a horror movie icon like Chucky as the game’s star is a clever move but its cumbersome controls and awkwardly placed obstacles make it more frustrating than fun. Hopefully someone else will learn from these mistakes and give us a slasher runner that makes it more fun to be the bad guy.