If you turn the dial back to early 2011, that was when developer Physmo released their twitchy platformer Mos Speedrun ($0.99). As if the name didn’t give it away already, Mos Speedrun is heavily based around completing each of its levels as quickly and efficiently as possible. It’s certainly fun to play through at leisure too, but speedrunning was the main draw of the game for those who looked to find the ultimate paths through levels and compete on its leaderboards. Excellently-designed levels and rock-solid controls ensured that Mos Speedrun consumed me practically from the very moment it was released, and has lived a happy life on my device ever since.

However, as much as Mos Speedrun has been updated and improved since its initial release version, the game has been somewhat ignored for the past year or so. Understandable as the game was already a fully-realized experience and Physmo went on to work on newer projects, but still, Mos Speedrun has been a staple of my “Please I Will Do Anything to Have You Updated with Widescreen Support" list of games ever since the introduction of the iPhone 5. Well, my prayers have been answered as today Mos Speedrun received an update with widescreen and iOS 7 support, as well as several other nifty new features.

The biggest new feature is a Prestige Mode, which tasks you with seeing how far you can get in the game’s campaign on just one single life. Here, you don’t necessarily have to complete the game as quickly as possible, but rather you can take your time to ensure that you don’t die. As Mos Speedrun players already know all too well, death can come in the blink of an eye, so the new Prestige Mode should be a pretty satisfying challenge. There’s also a new Game Center leaderboard to track your progress in Prestige Mode. 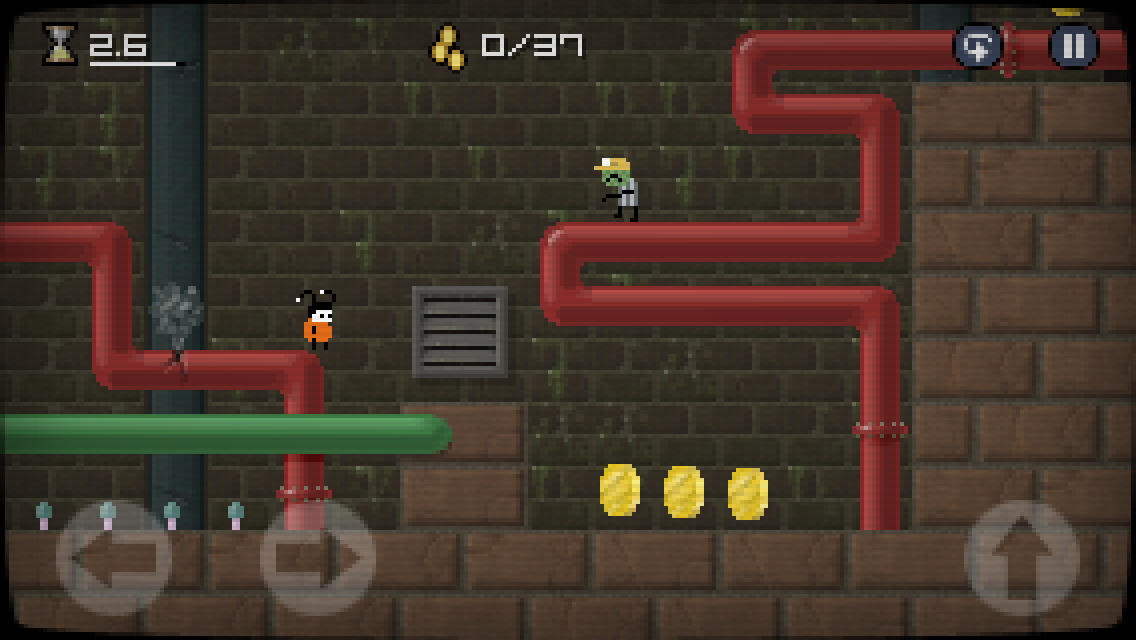 Some of the more minor new features include a restart button present at all times on the main game screen, in case you’re impatient like me and want to restart as quickly as possible when you screw up. There’s also slightly redesigned virtual button graphics along with a new icon, and the game’s video recording feature now records at a higher resolution than it did before. Finally, there is a brand new Web Level made especially for the TouchArcade community. One of the very cool features of Mos Speedrun is its ability to load levels right from a link from the Safari browser on your device. This way, new levels can be created and put into the game without going through the whole Apple approval process business.

There are already five available Web Levels which you can gain access to by first having Mos Speedrun installed on your device and then visiting Physmo.com on your device’s browser and clicking on the links available in the sidebar on the left. Clicking one of the Web Level links opens the level inside of Mos Speedrun, where it will be saved under a special Web tab in the world selection menu. The new TouchArcade level isn’t listed on the Physmo home page just yet, but you can access it by visiting this link on your device. You can also find that link posted in our forums.

So there you have it, what I consider a real App Store classic in Mos Speedrun has been reinvigorated with a brand new update. If this is the first you’ve heard of Mos Speedrun, there is a lite version to try, though that hasn’t been updated in years. It will however give you an idea of what the game is like, so if you enjoy that, definitely check out the full version which is available for just a buck.