It’s that time of the month again, and without missing a beat, we have a new RPG from Kemco. Destiny Fantasia ($3.99) comes to us by way of developer WorldWideSoftware, Kemco’s original mobile partners in crime. They’re most famously the developers behind Symphony of Eternity ($6.99) and Symphony of the Origin ($7.99), and they, in my opinion, turn out the worst work out of any of the teams Kemco publishes for. They last poked their heads up on iOS with End of Aspiration ($6.99), a game we didn’t care for all that much, and most of the criticisms of that title apply fairly well here.

In this game, you’ll follow the story of Lidim, a young man from a small town with a tragic past that’s about to get a lot more tragic. He also has the honor of possessing perhaps the least stupid name of any of your party members. Yes, ‘Lidim’ is the least stupid name you’ll be working with here. Anyway, Lidim’s whole world gets rocked shortly after the game begins, involving him in an adventure to save the world from Final Fantasy 7‘s main threat. He’ll be joined by a typical healer girl named Pure, a mysterious girl named Elis, a grizzled old warrior named Crag, and a fiery dancer named Fruitie. We learn very little about most of these characters throughout the game, with what small character development that occurs happening over the course of two or three lines. 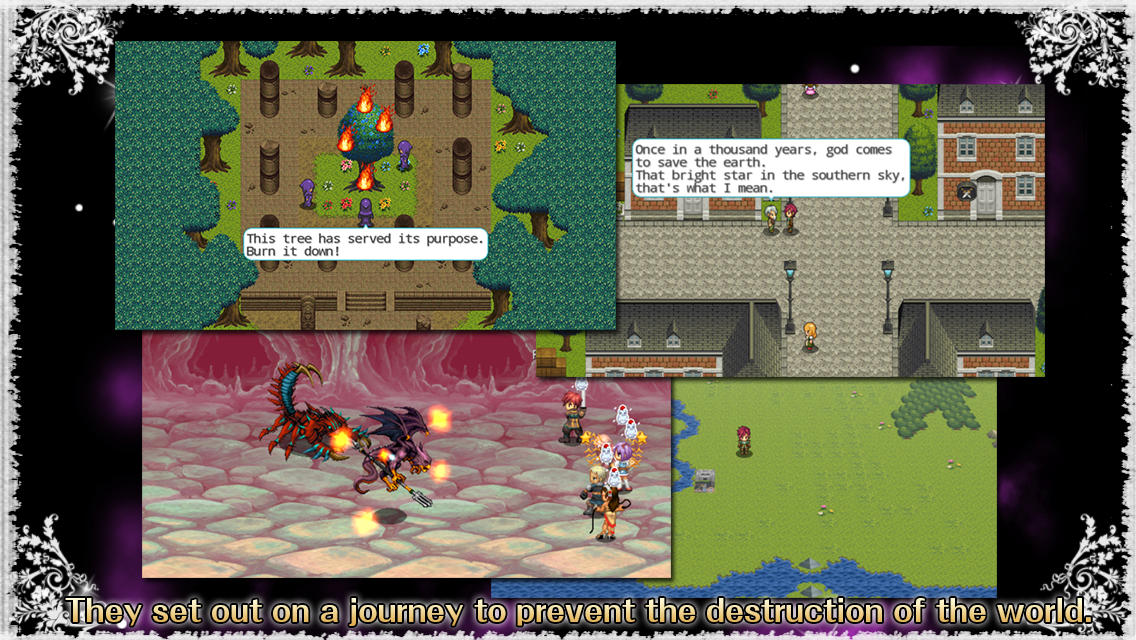 The story isn’t interesting at all, to be straight. There are no surprises, no interesting twists, and no memorable characters. Adding to that problem is that there are additional scenarios that ostensibly fill out the characters’ backgrounds a little bit, but they’re only accessible by spending DFP, this game’s version of Kemco’s usual IAP set-up. DFP can be earned by killing enemies or bought, but over the course of the game, you’ll likely earn somewhere around 35-40 points, and each of the three scenarios cost 100 DFP. So you’re either grinding two full playthroughs worth of enemies per scenario, or you’re paying up with some real money. It’s the worst kind of content to hide behind this kind of paywall. I don’t mind cheat items and even optional challenge dungeons don’t bother me that much, but the extra story stuff is meaningful enough that it should be in the game, but not interesting enough to pay that much money or time.

The game itself is just kind of there. WorldWideSoftware has never done much in the way of interesting or unique mechanics, and they’re not about to start now. There’s the thinnest veneer of trying something different here when you notice there are no levels or experience points, but rather seemingly random stat gains after a certain number of battles. It almost seems like it’s using a similar system to the ill-fated Final Fantasy 2 ($7.99), where your actions will determine how your character grows, but by the end of the game it’s apparent that the whole thing was smoke and mirrors. Mages develop in mage-like ways, fighters in fighter-like ways, no matter what you do in battle. All they’ve really done is broken the levels into piecemeal steps and obscured the experience points. 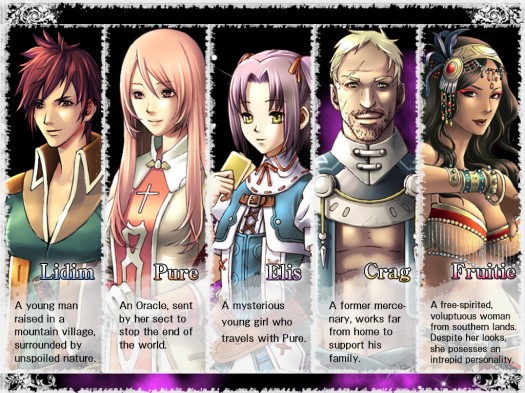 Following this pattern is the ability system. You learn new abilities by wearing weapons, armor, and accessories into combat, similar to last month’s Infinite Dunamis ($3.99). There is considerably less room for customization here, however. While in Infinite Dunamis, you could swap around magic sets and some items between characters to build them the way you like to an extent, in Destiny Fantasia, almost every ability-teaching piece belongs to one character and one character alone. There are some accessories that can be equipped by everyone, but the only abilities they offer up are stat gains, and they’re small enough in number that you can have everyone learn them all quite easily.

Battles are by-the-numbers turn-based affairs, with no unique or unusual elements to set them apart from the boilerplate. The game is so easy that you can more or less lean on the old tactics of jamming the fight command on regular enemies, healing between fights, and spamming your most powerful skills/spells on the bosses. At one point late in the game, you can choose your next few destinations in any order, but there’s an obvious intended order just based on the difficulty of the enemies and level of equipment found within the dungeon. Well, I went in reverse order, and I was still never in any danger of wiping except for once against a boss. Sadly for that boss, once he had me in low HP, it triggered one of my characters’ esoterica powers (cough, limit breaks) which fully healed my party. With little in the way of real challenge or new ideas, the battles are as dull as they are numerous.

The dungeons themselves are not too bad, with lots of branching paths and hidden treasures. There’s a reasonable amount of visual variety to them, with overlap being explained within the game’s mythos. Most of them are fairly large, and some of them have gimmicks that are well-worn, such as switches or sliding ice floors, but used well enough to make things interesting. One of the game’s few unusual ideas rears its head here, and it’s perhaps surprisingly nothing but annoying. You see, in certain dungeons it’s very cold or very hot. If you don’t use a particular item every so often, you’ll constantly lose HP or MP. The game heavily telegraphs when this kind of dungeon is coming, and the shops immediately prior will be selling the items at a reasonable price, so all this ends up being is a constant irritating need to duck into your menu and fish through your huge list of items. Fortunately, the gimmick is only used a few times during the course of the game, but that just makes its inclusion even more annoying.

One thing WorldWideSoftware does do well is presentation, and Destiny Fantasia is no exception. Using the same engine that debuted with Symphony of the Origin, the game’s battle scenes and overworld look gorgeous. It’s also Universal, so if you’re on iPad, you don’t have to put up with a case of the stretchies. Characters have voices in battle, albeit Japanese-only, and there’s even a proper introduction song before the title screen. It really feels like it’s on a whole other budget level compared to the efforts of Kemco’s other partners. Unfortunately, that comes at a price. Destiny Fantasia burns brightly with its production values, but it’s also a much shorter game than the usual. While other games from Kemco tend to run from 15-20 hours, I was watching the credits on this one before the clock hit the 10 hour mark. Once you have the freedom to explore the overworld, it’s kind of surprising how small the whole thing is.

Destiny Fantasia is basically a microwave pizza JRPG. It’s almost devoid of taste and you probably shouldn’t eat it, but if you’re hungry and want something that vaguely resembles real pizza, it will probably hold you over. I’d recommend Doom & Destiny ($2.99) or RPG Warlord Revival (Free) way ahead of this one, but if you’ve already finished those up, this will help you cover your math-battle itch until the next release. Most gamers would be wise to just let this one pass by, though.