It’s interesting how much a simple fresh coat of paint can improve a well-worn genre. Today’s example is Warlord Revival (Free), from the familiar faces at EXE Create, who have apparently decided to counter-program the release of their last RPG, Infinite Dunamis ($3.99), with this one. The funny thing about this game is that it’s an enhanced port of one of their oldest games, originally released for Japan-only feature phones, yet it contains many welcome systems and features that more recent releases lack. While you’ll definitely spot things that date the game a bit, it’s still a really good RPG. If you, like me, happen to be a nerd for the warring states period of Japanese history, you’ll certainly have a great time here.

Warlord Revival is one of the early games that used the engine that EXE Create uses to this day for their RPGs, and as such, many aspects of the game are instantly familiar. What keeps them from being too familiar is that instead of a generic fantasy world, the entire game takes place in the Edo period of Japan. If that’s not different enough for you, it’s the Edo period of Japan as imagined if a ton of important historical figures from the warring states period suddenly came back to life and ran amok. This truly bizarre melding of JRPG tropes with actual history makes this game stand out among its peers. 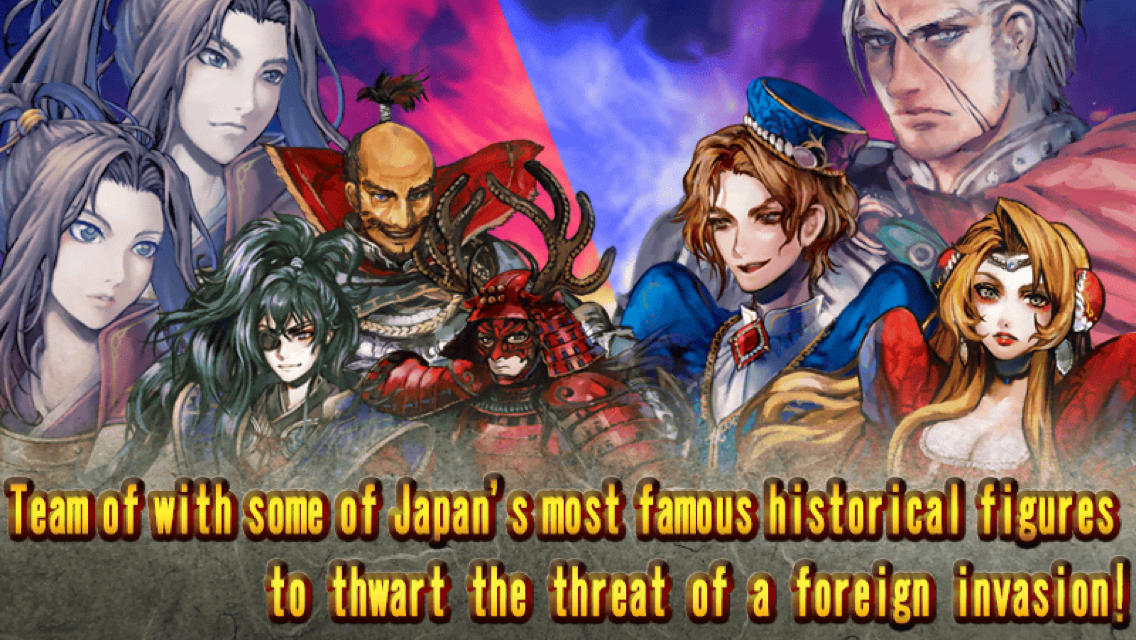 Instead of the usual JRPG party members, you’ll fight alongside Nobunaga Oda, Nobushige Sanada, and Masamune Date, with their personalities run through a JRPG filter but still kind of intact. Rather than battle giant trolls and dragons as boss monsters, you’ll be facing off with Shingen Takeda, Hideyoshi Toyotomi, and Ieyasu Tokugawa. The masterminds behind it all aren’t some ancient evil buried centuries ago, but foreign invaders trying to stir up the pot in Japan. Granted, they’re evil, magic, oddly incestuous foreign invaders, but that just makes it even more amusing. ‘Amusing’ is probably the best word for it, actually. It’s about as historically accurate as Bill and Ted’s Excellent Adventure, but it’s at the very least a unique premise in a genre that could use more of those.

The game more or less plays out as a standard RPG, with you going from town to town solving problems and being randomly attacked almost everywhere you go. One of the ways the game shows its age is in that you cannot freely roam around on the overworld map. Rather, you are confined to following set lines laid down on the map, referred to by the game as highways. As you move from point to point on these highways, you have a random chance of being attacked, though every fight you win on each highway segment will make that segment more peaceful and reduce the chances of being jumped again. Ensuring these highways are peaceful by the end of the game is one of the factors that plays into the game’s ending, so you’ll want to keep them clean.

When you enter points of interest on the world map, such as towns or dungeons, you’ll switch to the more familiar setup of being able to wander around wherever you like. In towns, you can buy new equipment or items and start (and sometimes resolve) subquests, talk to NPCs for info, or stay at the inn to restore health and trigger some dialogue from your party members. In dungeons, you’re more or less just going from point A to point B, with the closest thing passing for a puzzle being keys hidden in treasure chests. Naturally, there are random encounters all throughout these areas, even when it no longer makes logical sense. Most of the dungeons should properly be called castles, and none of them are overly large. At the end of each of them, you’ll face a boss, almost without fail an actual historical figure. 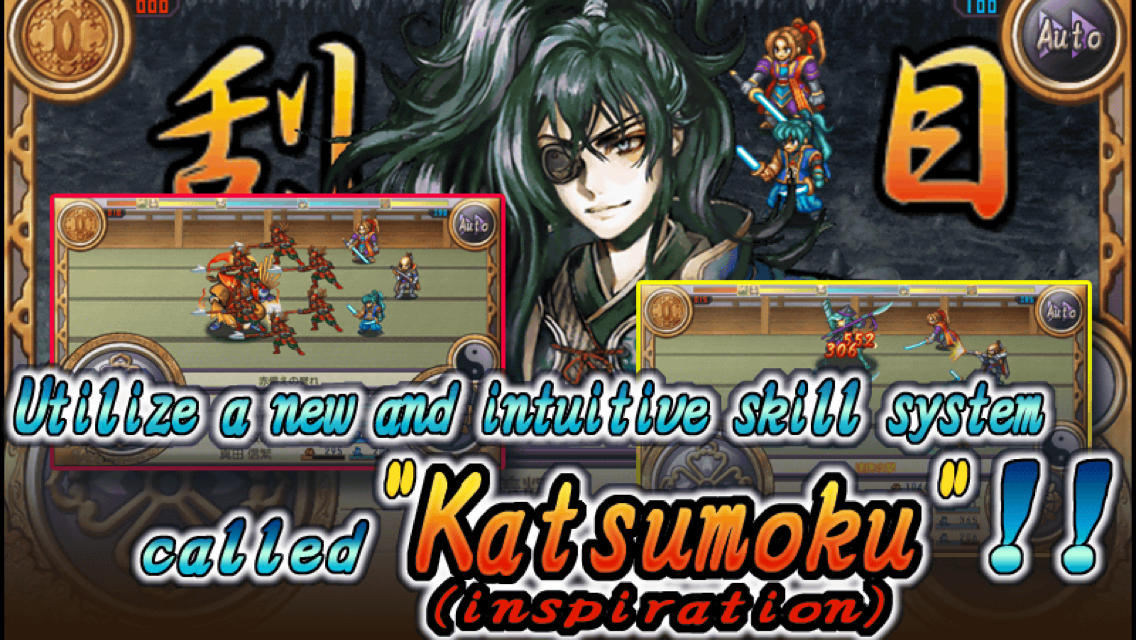 Now, if the unusual setting were the only thing this game was doing differently, that’d be enough to catch my attention, but there are a lot of other little things going on here. First off, when you start the game, you can choose whether your player character is male or female. This is pretty rare for JRPGs, especially games with a character focus. It’s even more rare for that choice to have a noticeable effect on the game’s dialogue, but it actually does here. It’s definitely worth playing both sides just to see all the little ways the character interactions change. As usual for EXE Create’s fare, the character interactions are the star of the show here. Your party members, an all-star samurai lineup, historically had very different ideas from each other, and this dream team match-up does a pretty entertaining job of speculating the kinds of discussions they would have.

Each of your party members has a trust level towards your hero character, and the actions you take will affect it. At various points in the game, you’ll have to make choices in your dialogue that don’t affect the main story much, but will impact your standing with your party members. Actions taken in combat also factor in, so if you let someone die and fail to revive them before the end of the fight, you’re going to lose a lot of trust with everyone. Trust is important for a couple of reasons. First, if your trust levels are high enough, when you stay at certain inns, you’ll be treated to a little skit focusing on that party member. They’re enjoyable little vignettes, sometimes humorous, sometimes sad, sometimes even a little thought-provoking.

Those who don’t care so much about the story will still want to raise trust, however. A high trust level improves the chances of your teammates joining in on your attacks during battle, which dramatically increases your damage output. Trust is also good for morale. Each party member has a morale level, and when it reaches a certain level, they’ll regenerate life each turn or perform stronger attacks. These factors really help tie the story and the gameplay together, and add a touch of depth to an otherwise pedestrian turn-based combat system. You have your usual options to fight or use special techniques, here broken broadly into physical arts and magic attacks, and there are a lot of them.

The character progression system in Warlord Revival is interesting and a little exciting. New special techniques can be learned and improved in a variety of ways. Sometimes when a stat reaches a certain number, you’ll unlock some techniques, while others are unlocked during battles by taking hits, using special techniques, or killing enemies. You end up with a lot of skills of limited usefulness, but it is pretty pleasing at a basic level when you see the red exclamation point indicating the character has learned a new skill. Seperate to this, when a character levels up, you get to distribute the points to their various stats yourself. Depending on how you spend your points, characters will gain different titles and gain access to unique techniques. 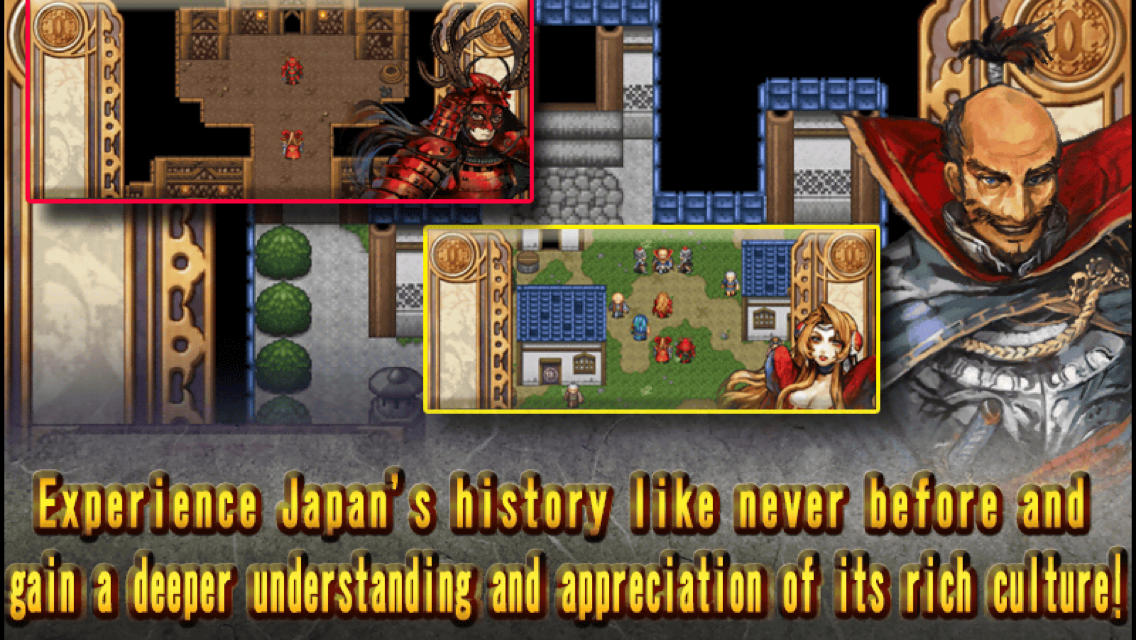 The sad thing about all this is that it’s mostly unnecessary. Warlord Revival is a pretty easy game, and the variety of techniques essentially come down to buffing up, healing, and dropping your best multi-hit attacks on the foes. Status ailments do stick fairly well on regular enemies, but there’s no real reason to do so, and they bounce right off of bosses, like many RPGs. Every time you level up, you’ll regain your HP and SP, so you don’t even run much of a risk of death by attrition. A couple of the bosses do require you to pay more careful attention, but they’re sparse highlights in an otherwise very straight-forward adventure.

Another way you can tell this game is from an older period of mobile gaming is the shorter length. Even if you opt to mop up the many subquests on offer, the game is only about 12 or so hours long, about half the length of recent efforts from this developer. With that said, the pace is pretty good, with only a couple of poor spots where the game asks you to backtrack through a dungeon you’ve been through before. You never really feel like it’s dragging its feet story-wise, nor does it feel rushed.

The game has been updated in terms of visuals and audio from its original release, but not by much. A huge, hideous frame borders the sides of the screen outside of battle to compensate for the wider screen of the iPhone compared to a feature phone, but battles are presented in a wider screen, with a lot more detail than the game used to have. Aside from having less animation, it doesn’t look different from more recent releases from EXE Create or Kemco, though I’m not sure if that’s a compliment or not. The music sounds a lot like the kind of music you’d hear on an older phone. It’s FM synth type stuff, and while it’s not bad, there are only a few songs, all of which you’ll be tired of in short order. The game also features a very small amount of voice acting in battles, but (logically) it’s all in Japanese.

The translation is, for the most part, good, but you can tell the localizers had a bit of trouble trying to maintain the unique speech patterns of the characters, leading to occasional awkwardness. Spacing and word wrapping is messed up pretty frequently, especially when opening chests. The App Store description, like Unlucky Hero‘s (Free), is a total mess and in no way indicative of the actual game’s script. Also like Unlucky Hero, the game is free to download, allowing you to play a short way into the game with a $7.99 IAP to unlock the rest. There are no other IAPs to be found in the game.

I personally found Warlord Revival to be a refreshing change of pace from the usual JRPGs we see on iOS. The setting is a lot of fun, the characters are interesting together, and I really liked how I could shape the story a little bit both by choosing my character’s gender initially and by making various dialogue choices as the game progressed. The combat is pretty fast-paced, and it’s enjoyable collecting all of the various skills. It was really cool playing “spot the historical cameo" with all of the NPCs, as well. It’s a bit on the short and easy side, and is priced perhaps a little high in light of that, but if you’re into JRPGs and/or Japanese history, I imagine you’ll have a kick with this game, just like I did.