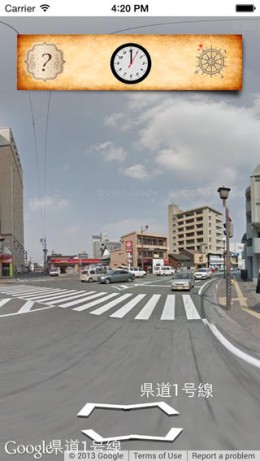 When the iPhone 3G was released and GPS started to become a thing on smartphones, developers everywhere tried to figure out how in the world to turn this functionality into a neat gameplay angle. Tons of real world games have subsequently been released over the years, but I’ve really yet to see one reach any kind of crazy levels of success largely because of just how big this planet is. Living in the Chicago ‘burbs, I’d often load up these geolocation games and have no one within 50 miles of me playing, at best there’d be someone in Chicago proper with the game, but who knows if they were even bothering to play it.

The geolocation game trend has largely died off as of late, and it feels like it’s been quite a while since we’ve seen any game that uses map data in an interesting way… Which makes Street View Adventures ($0.99) feel particularly noteworthy. Picking a random place in the world with Google Street View data and virtually wandering around is in my rotation of things to do online when I’m super bored, and Street View Adventures takes that same activity but loosely structures it around a game.

Instead of randomly Street View-ing, you’re dropped in various cities around the world and have to make it to a point on the map as quickly as you can, and your movement is entirely based in the world of Street View. Of course you can hit a button to refer to the overhead map of the area, but throwing down good times depends relies on good map memory. In a world now filled with turn by turn GPS, this often feels more difficult than it should be.

Yeah, the concept is basic, but the implementation is good… And Street View Adventures seems noteworthy if for no reason beyond it being the first game in quite a while that leans on map functionality that made me go, “Huh, well that’s neat."