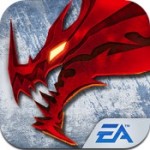 Earlier this month we took a hands-on look at EA’s mobile Dragon Age effort Heroes of Dragon Age, and this week the game has officially soft-launched in the Canadian App Store. During our brief hands-on time with the game, we came away with the impression that Heroes of Dragon Age itself was a pretty cool CCG-style strategy game with tons of fan service for players who are heavily involved in the Dragon Age lore. However, it’s not a traditional RPG like other entries in the series, and a free-to-play business model threatened to put a damper on the experience. In fact that same freemium-ness seems to be the chief complaint from players in the similarly soft-launched Dungeon Keeper remake.

Still, I think there’s plenty of potential for Heroes of Dragon Age to be an enjoyable experience. I’m eager to get my hands on it again as I really enjoyed my brief taste of it in our preview. And of course soft-launch periods are intended as a way to test out free-to-play elements, balance, and other factors in the hope of tweaking things before a worldwide release. I’ll be hoping for the best, but if you have access to a Canadian App Store account you can check out Heroes of Dragon Age for yourself for free. There’s a discussion in our forums and we’ll bring you word of when a worldwide release for the game may occur.