Upon first playing Soul Grinder (Free) and, understandably, being used to the plethora of casual endless runners and the like that populate the App Store, I did find it a bit hard. This game ain’t no walk in the park, though with something that all too many iOS gamers seem to not want to indulge in these days–persistence–Soul Grinder becomes an immensely enjoyable blaster.

In Soul Grinder, relative touch controls shift our protagonist up and down and the bullets fly automatically. Touch the right hand side of the screen and our main man boosts forwards.

It’s this boost mechanic that takes Soul grinder from being a relatively challenging shmup to a hard as nails blast-fest that requires not only a knack for putting bullets in the right place, but the ability to learn from your mistakes. In the earlier levels, you need simply move up and down and place projectiles between yourself and the various enemy robot scum. 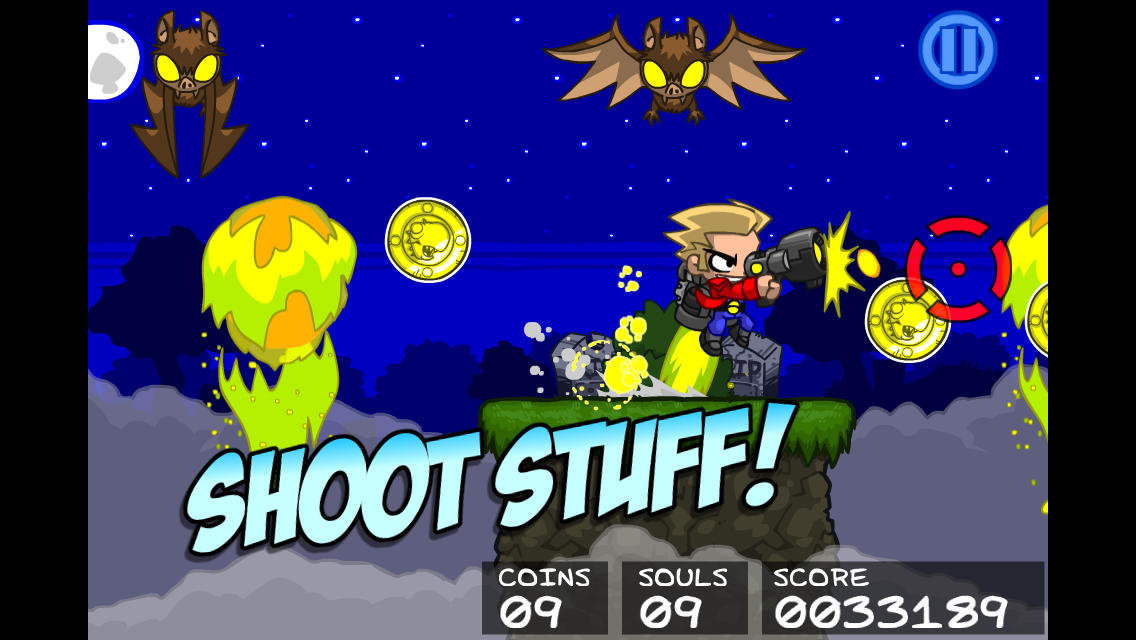 Keep playing, however and the boost button becomes absolutely vital. Enemies and hazards arrive in waves that demand precision judgement. For example, large crates move up and down… leave it too long to move, you get squished; move too early, you could end up swallowing a mouthful of plasma or being zapped by one of those pesky intermittent laser beams.

It’s this old-school approach that made the game such a joy to play. Instead of just blasting your way through the various levels you need to think on your feet, and should you get it painfully wrong, you’re going to need to kick those memory banks into gear for another attempt. In Soul Grinder’s later levels it becomes absolutely tantamount to survival to remember where each an every obstacle is placed and where each and every enemy is spawned.

Of course, there are upgrades available via the game’s store that make the quest somewhat easier. Available for limited use are a dual shotgun, shield and the obligatory coin magnet. On top of the power-ups, there are a bunch of “masks" to purchase, with which you can customize your character.

There are two types of in-game currency, coins and souls. The coins are scattered sporadically about the levels and the souls are collected from the slain enemies. Fear not, though – these coins and souls are plentiful and not related to IAP. In fact, run out of either and you need to get back to gaming, as there is no option to purchase more with “real" money. To be honest, the system does feel like it was designed with IAP in mind and I’m not quite sure why it isn’t there, but hey, I’m not complaining. Also notably absent is Game Center, though that’s hardly a deal breaker.

At the end of the gaming day, Soul Grinder is a challenging, well-designed shooter full of eye candy and not full of unwanted IAP. Its 24 levels may not be the longest experience out there, but the challenge more than makes up for what it lacks in length. And to be honest, the stages are the perfect size considering how many obstacles you need to commit to memory.

If you’re more the casual gamer and not trained for this retro style of twitch gameplay, you may want to look elsewhere, but for the hardcore shooter fan with masochistic tendencies, you need look no further than Soul Grinder.