It’s been about a month, so that means it’s time for the latest JRPG release from Kemco. As I’ve mentioned in prior reviews of their games, Kemco uses several different developers in order to ensure a steady flow of new JRPGs for mobile platforms. Even with multiple teams, however, the development pace is pretty breakneck, so most of these developers end up using the same engine and many of the same assets as their prior games, opting for minor refinements and a few new twists each time to try to keep things fresh. What this means is that if you’ve played some of Kemco’s earlier releases and you know which developer they’ve tapped for their latest, you can probably fill in a lot of the blanks as to whether or not you’ll like it.

Infinite Dunamis ($3.99) comes to us by way of EXE Create, the developer behind Alphadia ($3.99), Dragon’s Odyssey Frane ($5.99), Across Age DX ($3.99), and the recent Unlucky Hero (Free), which I enjoyed quite a bit. They’re not the most experimental developer in Kemco’s stable, but I think they do create the best games of the lot. EXE Create is carting a very old engine with them, originally designed for Japanese feature phones, though with each release they seem to shed more and more of it. Unfortunately, the engine still has a lot of problems with smooth scrolling, even on high end hardware. I’m looking forward to the upcoming Alphadia Genesis, which seems to finally be shaking up the old engine in a big way, but for now, this is what we’ve got. 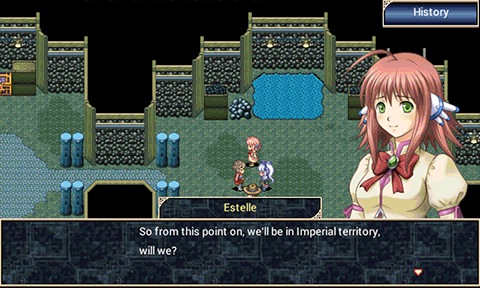 Infinite Dunamis follows the story of a young engineer named Luke, who stumbles across a very unusual woman while scouring a cave for machine parts. Why yes, he is an orphan, how did you know? Anyway, this woman, Estelle, ends up pulling Luke into a bigger situation than he could have ever imagined, which is troublesome because he is so darned reluctant. As is the norm for a Kemco RPG, the premise is almost textbook JRPG, and while this game tries to include elements of science fiction to keep it from being completely generic fantasy, it’s still basically nine parts fantasy to one part sci-fi. You’re still whacking things with a sword, still using magic to light local fauna on fire, still opening up people’s treasure boxes to steal their stuff, and so on.

Although the set-up isn’t terribly interesting, it’s usually the characterization in EXE Create’s games that is part of what makes them rise above the rest. Infinite Dunamis shares this strength, with a lot of interesting banter and conflict between the main characters. Don’t misunderstand me, they’re still paper cutouts compared to higher budget RPGs, but they’re nicely detailed cutouts, at least. Unfortunately, while the cast generally stands above recent fare like Bonds of the Skies ($7.99), Luke is nowhere near as interesting and likable a main character as Jasper from Unlucky Hero. He comes from the Squall Leonhart school of main character design, being a largely disagreeable jerk for most of the game. 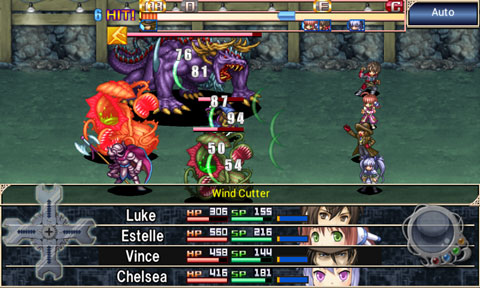 As for the story itself, it never really catches fire. It involves a righteous and just kingdom, an evil empire, a secret enemy that takes advantage of both, and a whole lot of wandering around in similar-looking caves and forests fetching things for people. Even though it’s mostly a road trip story, there’s an overwhelming lack of urgency that permeates the whole thing. The whole first half of the game is just wandering from place to place, gathering information, with occasional cutscenes clumsily foreshadowing the actual villains of the piece. At the very least, the translation is decent enough. There aren’t very many errors compared to Kemco’s other recent releases, and most importantly, the dialogue is actually pretty interesting and mostly free of awkwardness.

As is typical for the genre, you’ll be wandering from location to location via a world map, entering dungeons of various types, killing a boss, and checking off some type of task that will give you access to the next location. You will, of course, be randomly attacked at regular intervals, taking you to a side-view combat screen where things play out in turn-based fashion. EXE Create has introduced a few new systems for the battles in this game.

The first new element is the Gaia Stone system. Turn order is based on the speed of the characters and the enemies, and is represented at the top of the screen by a bar with every participant’s icon on it. When an icon reaches the end of the bar, it’s their turn to take an action. Gaia Stones are random effects strewn along the bar, and when they raech the end, the next participant, friend or enemy, will be inflicted with that random effect. These range from simple attack and defense buffs and debuffs to full heals and instant deaths. These things can really ruin your day if you’re not careful and more than a little lucky, but some characters fortunately have the ability to manipulate the Stones a little bit. I found it a bit hard to build a strategy around these, so they’re just kind of there. 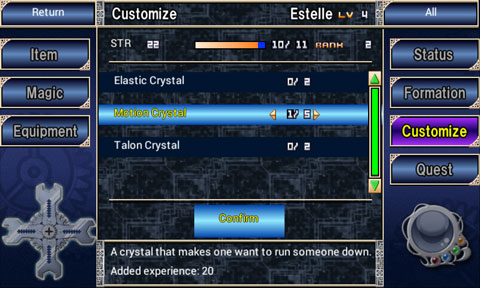 Next, we have the Accel Gauge. As you perform special attacks in combat, a meter will fill up. Once it’s full, you can unleash it at your discretion to give that character an instant turn. The gauge takes a really long time to fill up, and the payoff really isn’t that good. Naturally, if you’re crafty, you can combine this with the Gaia Stone system to try to give yourself some beneficial effects, but the juice really isn’t worth the squeeze. Finally, some attacks will stun the enemy, allowing you to get in another shot. This can be combined with multi-target attacks to clear the battlefield in a hurry.

Beating the enemies will give you experience points, money, and items. The most frequently dropped item, crystals, play into one of the unique character building aspects of the game. Unlike the other party members, Estelle is part machine, so she doesn’t get a lot of stat boosts when she levels up. Instead, you have to feed her the crystals that the enemies drop to improve her stats. She can also use these crystals as items to produce various effects in battle, but that would be a silly use of them.

Magic comes in a variety of elements and, as you would expect, follows a bit of a rock-paper-scissors set-up for determining strengths and weaknesses. Characters learn magic by equipping a ring of that element, at which point they will start earning work points, or WP, that will give them access to more spells. Magic consumes MP, and anything but the weakest spells is going to burn through your MP in short order, so you’ll want to be careful with when and where you use it. The same goes for skills, special attacks learned by equipping weapons and using them for a certain number of battles, which also draw from your MP pool when you use them. 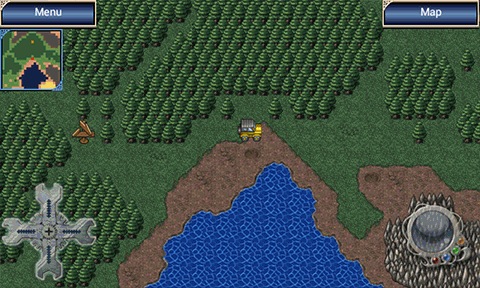 Interestingly, the more you use a weapon, the stronger it becomes, which results in having to make some hard choices about which equipment you want to use. Often the newest weapon shop’s selection will be weaker than what you’re carrying, but will offer a new skills to learn and the possibility of becoming even more powerful in time. This method of teaching new skills also means that finding the various hidden weapons in dungeons is more important than ever, because you are potentially missing out on far more than just a stop-gap between the weapons you’ll find in town.

I love the new options for developing your characters in this game. It reminds me of Final Fantasy 6 and 9 all at once. I’m less enamored with the additions to the combat system, with the loss of Unlucky Hero‘s formation and tactics heavily outweighing what Gaia Stones and the Accel Gauge bring to the table. Of course, it ends up not being so important, because the difficulty in Infinite Dunamis has been toned way down from EXE Create’s prior efforts. In Unlucky Hero, if you didn’t take advantage of the formation system, you wouldn’t survive many of the bosses and even quite a few random encounters. Here, you can play pretty sloppily and still get away with it most of the time. It’s not mind-numbingly simple like Bonds of the Skies, but the usual strategy of unleashing your strongest attacks and healing whoever’s low on HP will take you far. The difficulty setting is adjustable, but since the hard difficulty just messes around with enemy stats, you don’t need to change your strategy much compared to normal.

I guess I should tick off the rest of boxes before I bring this review to a close. No, it’s not Universal. The music is repetitive but passable, with the overworld theme’s opening notes, the ones you hear most often, a bit too close to a piece of music from Final Fantasy 6 for comfort. Interestingly, there are Game Center leaderboards for the most frivolous of stats. There is IAP, but it’s even more invisible than usual for Kemco’s stuff. There are no unlockable dungeons or anything, just cheat items you can buy from vending machines, and you can earn the currency in-game by killing monsters, which I imagine you plan to do anyway. The virtual directional pad used for movement is a bit fussy, and there are no touch control options.

By the usual Kemco RPG standards, Infinite Dunamis is better than average thanks to good character interactions, a decent translation, and an enjoyable character progression system. Compared to the other releases from EXE Create, it falls a bit flat, mostly due to the awful main character and the combat mechanics not coming together the way they seem to have been planned. If you’re looking for a new JRPG to tide you over for the month, this is definitely a better way to spend your twenty hours than Bonds of the Skies was, but it fails to rise much above the assembly-line conditions it was made in.