Galaxoid ($0.99) is not an original game, but it’s a great time-killer. While the retro shooter is obviously a riff on the famous arcade classics Space Invaders and Galaga, developer Jacob Davis introduces some basic tweaks that turn it into a perfect on-the-go game for mobile devices.

Think about Space Invaders: the rows of aliens up top and your little ship pew-pewing down below on a horizontal track. Now add brighter, flashier graphics; a killer techno-space beat; and a faster, more intense pace.

That’s Galaxoid in a nutshell. As enemies “break out” of formation, they spin and weave in the player ship’s direction (or occasionally divebomb), spewing tiny bullet discs as they fly offscreen and reemerging at the top if players fail to destroy them in time. Succeed, and they explode in a sound like little cracks of fireworks.

Those details are what make this remake of sorts so much fun. During play, lasers or health packs fall from above, and grabbing them stores those hearts and power-ups on the left side of the screen so players can keep track of their inventory at a glance. Coins also drop, and blasting or running into them releases numbered scores that float around. They’re fun to collect, and players must weigh the risk and reward of going straight for them or other items. 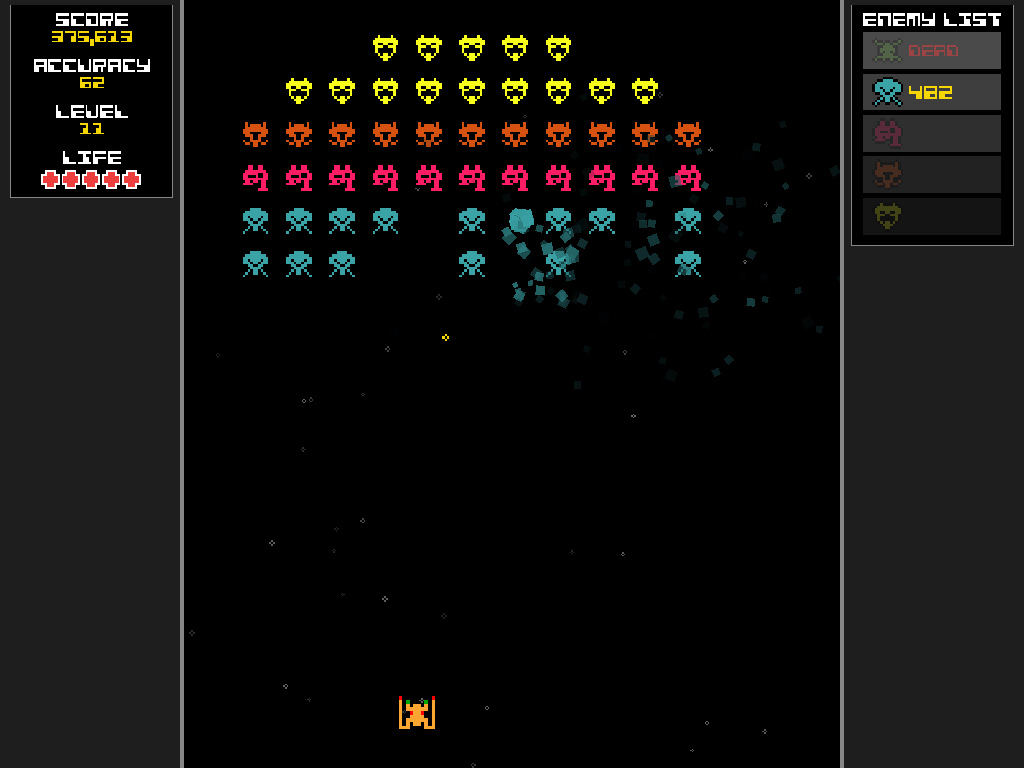 On the right is a sheet that features each colored enemy and your last score for each type. Foes that die when they’ve broken out of formation are worth more points, but players can also earn more with better accuracy, which displays in real time on the left-hand side of the screen.

All of this is explained in a handy guide that’s accessible from the main screen. I love that it’s interactive, enabling players to learn and practice at the same time. Afterward, they jump right into the full experience.

But the user interface and controls are easy to understand anyway: Sliding your left thumb left and right steers the ship, and tapping with your right fires the guns. Simple but addictive.

Nearly everything about Galaxoid is awesome, and I keep coming back to try for my high score. What I really love is that every 10 levels, a giant boss comes onscreen. His pixelated explosions, little blocks that chip off him in cool colors, are so satisfying to see.

But it’s not perfect. There’s no pause button, and although Galaxoid halts occasionally to reveal your score, that’s not a checkpoint. Players can’t continue from any of the 50 levels. Each time they die, they have to start over. The health system is generous, but it’s not always enough to sustain you when the enemies keep getting tougher. Some players might want the option.

Galaxoid only features one mode, too, and levels are more or less identical, which is one complaint from the forums that I agree with. Another is the need to keep tapping to shoot rather than an option to hold your thumb down for a steady stream (and release to stop). To be honest, this bothered me less as I continued to play, but a feature like this is worth considering — although one user on our forums smartly observed that continuous shooting, on the other hand, would ruin the accuracy rating. Some kind of in-between would be good.

Since Galaxoid is basically a modern version of Space Invaders, it would benefit from modern conveniences. A strict setup isn’t necessary for it to properly replicate an ‘80s arcade experience. It does that well already.

Even with these problems, people on the forums seem to love Galaxoid, and I do, too. But I’d love to see more basic features, especially a pause button and checkpoint system, as well as some additional modes.