Strategy games can often be an intimidating lot. The concept of micromanaging in general, right off the bat, can be make or break for many gamers out there who don’t want to keep track of too many variables at once. But not all strategy games are created equal, and some of them do a better job of easing people into the genre than others. Fading Fairytales (Free) may not be the most impressive game on the App Store, but it’s an excellent introduction to the tactical genre.

The land of fairytales is in trouble, and it’s all Pinocchio’s fault. Well, him, Robin Hood, and a few other folks who are normally heroes in their respective tales. Starting off with your initial party of a Warrior, Mage, and a Thief, you’ll travel across the fairytale world setting things right, one corrupted hero at a time.

Fading Fairytales‘ story is neat in the sense that you get to see how the team designed each popular character, but the script is particularly weak, specifically in terms of dialog. The jokes often fall flat, there’s no real sense of interaction or relationships between the characters, and the writing is outright poor in many portions of the game. The wooden character animations don’t really do the game much justice either, even if the designs are, on the whole, unique. 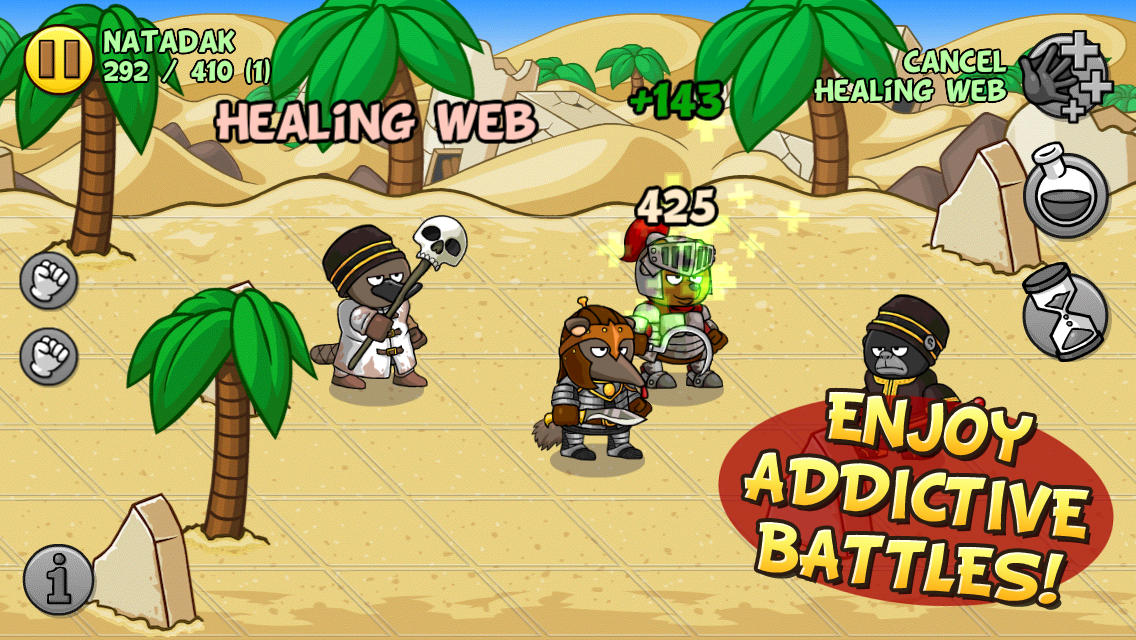 Thankfully, combat is implemented in a manner that’s much easier to digest. Battles take place in a grid-based fashion, and are extremely simplistic. I’m talking “move, attack, and magic" is all you have to choose from, simplistic. You get two actions per turn, and three party members per fight – that’s literally it. All you have to do is move your weaker units defensively so you aren’t always in the grasp of multiple enemy units, and move your more sturdier characters into the fray to soak it up, occasionally using your abilities and attacking along the way.

The difficulty curve is perfectly presented, to the point where you won’t have to do too many remedial type battles before you get into the more intense stuff – just know that Fading Fairytales‘ definition of “intense" is pretty low key compared to the rest of the genre.

IAPs are in place and they don’t ruin the game, but they do tend to put a little pressure on you to sink your teeth into them. For instance, you can buy better equipment to avoid lengthier battles, or outright buy some of the coolest party members in the game.

In lieu of paying for any IAPs, you will have to do a bit of grinding to beat out some of the harder encounters, but it is possible to carry on. This isn’t anything new to the tactical genre, but it will obviously grate on some – especially with the existence of microtransactions asking you to pay at every turn.

Fading Fairytales is a very, very simple game that’s great for newcomers who want to acclimate themselves to the strategy genre. It’s really straightforward and has a bit of charm, which works in its favor – I just wish it had more tactical nuance to appeal of fans of all skill levels, and a better script.