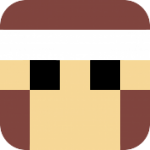 Endless runners really have to stand out these days in the rather crowded space to make an impact. Thankfully, Retro Runners (Free) does just that with a unique visual style and some smooth gameplay to boot.

Similar to Temple Run without the twists and turns, you’ll trek your way down a course, shifting left and right between tracks and jumping to avoid various obstacles. The controls are super easy — swiping on the left side switches tracks, and the right side leaps into the air. Water pits, other runners, and hurdles are among the traps you’ll have to navigate, which forces you to adapt rather quickly. Along the way you’ll have to pick up water bottles to continue on and keep your health bar topped up, which makes things a bit more hectic.

You’ll be tasked with collecting coins and getting as far as you possibly can, which unlocks challenges — something that’s basically required in this genre at this point. Although there are a decent amount of things to navigate, future updates could really strengthen the game by starting you in different locales when each race begins, and mix up the formula a bit.

The art style is a cute, vibrant take on South Park‘s Terrence and Philip cartoon. Nothing is drab, and pretty much every single character has some life to them. But it doesn’t just look endearing, as there are a few funny Easter eggs hidden throughout, and ridiculous racers like skeletons and zombies. It’s not laugh out loud funny, but it’s likeable enough to crack a smile every now and then.

IAPs are available, but they’re extremely sparse and don’t ruin the experience in any way. You can buy lives, coins, and the ability to remove ads, but considering this is a free game it doesn’t feel exploitative. You do need to grind a bit though to get some of the bigger rewards (including the zombie runner that eats people to replenish health), which can get tiring after some long sessions mid to late game.

Retro Runners is a great little free runner that’s done right, mostly because does enough to endear itself to players without forcing IAPs down your throat. It could use a little more diversity, but it’s worth your time if you’re not sick of the genre by now.