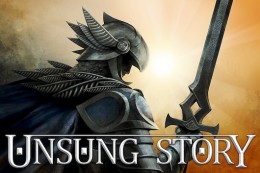 Joystiq, reporting live from the Tokyo Game Show has an awesome scoop on a story that’s sure to make fans of Final Fantasy Tactics ($6.99) fans squeal with glee: Vagrant Story and FFT director Yasumi Matsuno is in the midst of working with Playdek on a new iOS strategy game. It’s called Unsung Story, and Joystiq has the premise on deck:

At the Tokyo Game Show, Matsuno explained to us that Unsung Story will be based around nine small countries, each one fighting one another. Matsuno is taking inspiration from the Saxon Britain of the 5th to 8th centuries, an era following the Romans’ retreat. As the name suggests, Unsung Story will focus on the more ordinary people of war – the footsoldiers rather than the Eisenhowers, as Goodman put it.

It sounds like things are still in the very early stages, but any sort of alliance between developers making awesome iOS games and developers who have made classics is a very, very good thing. For the rest of the details, swing on over to Joystiq.