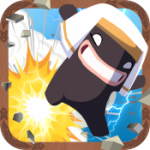 Gods vs. Humans ($2.99) from developer Microids is confusing. As a mythological and — let’s face it — complacent god, you watch over the humans laboring on the earth below. The happier they are, the more power you receive. But you get your kicks from destroying the magnificent towers they build toward the heavens, which makes them angry and less devout.

It’s not the most logical game ever. The goal is to keep the humans’ worship level high despite all the destruction to their tower — to trick them into loving you so you can hurl down more fireballs and lightning bolts and torrents of rain and wind. Wrath is your idea of a lazy afternoon. 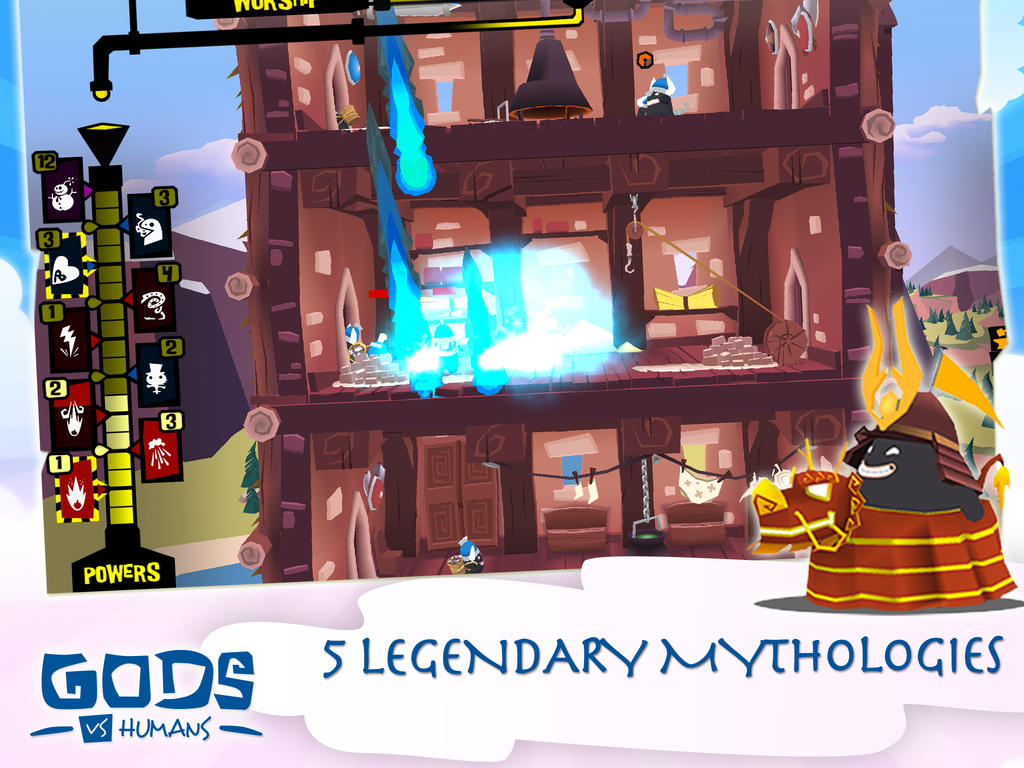 Worship is indicated by a meter at the top of the screen. To the left are tiers of powers, which charge as worship grows and trickles out like droplets of water. On the right is a layout of all the tower floors and markers for special levels, like construction floors and temples of evil, where rowdy priests badmouth you to the other humans, lowering worship.

Players can employ both offensive and defensive powers. Sending out pin-ups girls, for example, is a great opening tactic that boosts the worship meter so you can spam offensive moves. The more power that’s at the ready, the stronger these attacks will be, enabling you to target and topple the four pillars on each floor more quickly and economically.

The strategy is quite deep. Eliminating all four pillars wipes out that floor, causing the one above it to crash down. Depending on its position in the tower, it can inflict massive damage on the floors underneath when it falls, and each of these maneuvers also weakens the bottom foundation of the structure. You’ll want to get its “health" down to zero to collapse the whole tower, and sometimes you can trigger chained destruction to deal significant blows in one swoop. 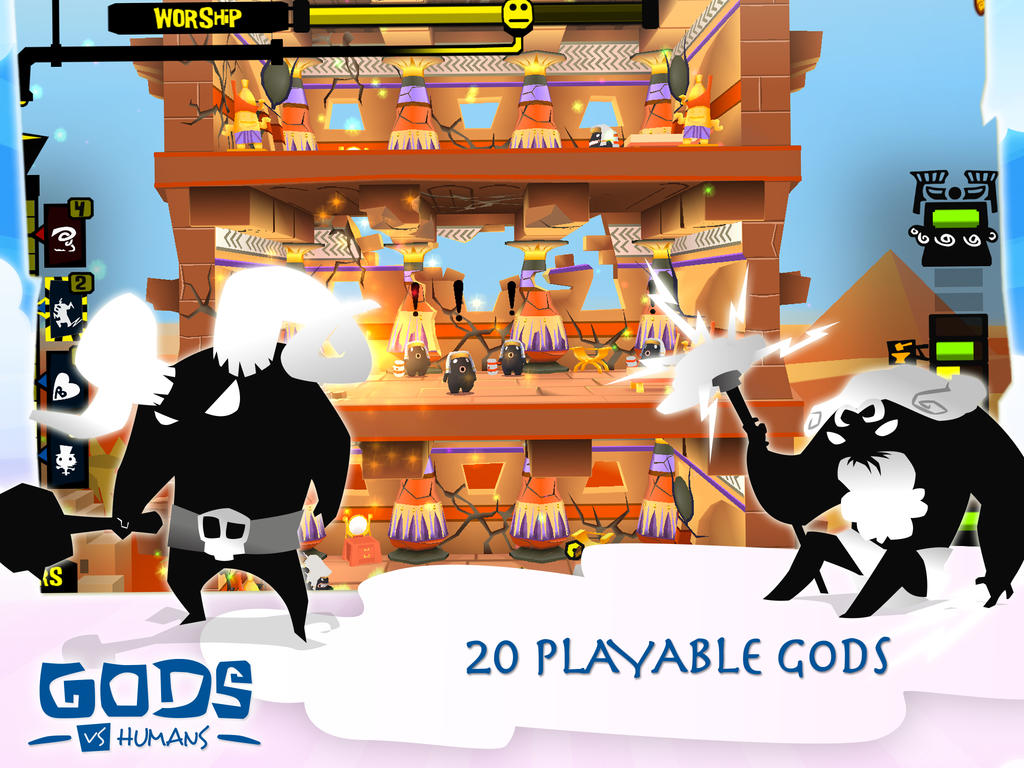 The humans aren’t just sitting idly by. They work to repair weakened pillars and continue to build new floors. If they reach your divine portal in the sky and send a blacksmith there after he forges a ram horn helmet, you’ll automatically lose.

Other humans wield certain items that block a particular elemental attack, which can impede attempts to collapse a floor. I found it easier to avoid them altogether and target floors that are the most empty, as you risk angering fewer humans that way. But after the first couple strikes, the humans wised up and came running to stop me.

Evil priests can negate your efforts to raise worship, and you can’t use defensive powers on their floors, which makes it hard to shepherd humans away from the priests’ harmful influence. There are good priests as well, but they’re not guaranteed to appear.

Gods vs. Humans splits all of this strategy into six basic and six advanced tutorials, which are objective-based levels separate from the Adventure, where you unlock new gods like Osiris and Neptune as well as new mythologies (themed locations). I wish that the developer had integrated these tutorials into the normal gameplay instead of forcing me back to the main menu, but it’s nice that you can revisit them if you want to brush up on your skills. 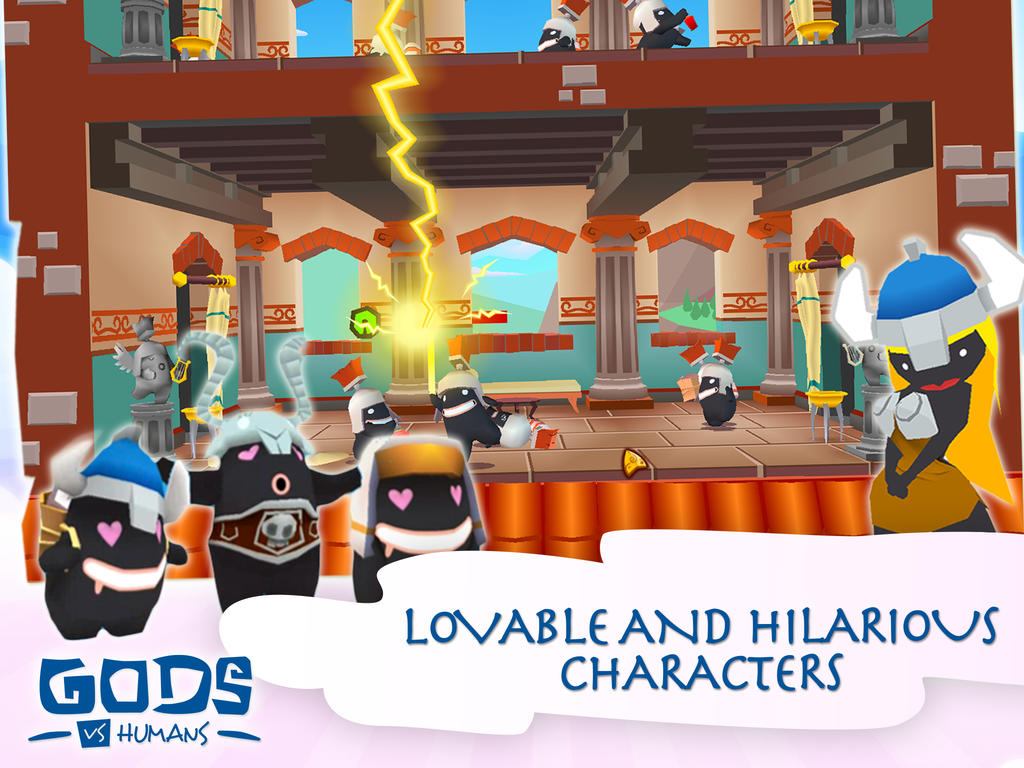 Levels seem randomized, so there’s not a lot of difference between the various modes — like Adventure or the Challenge or Free modes — when you really get down to it. I do like that you’re rewarded after nearly every victory with bonuses like new powers or more efficient ones. And while the objective-based levels are much more difficult (such as destroying a tower’s foundation in a time limit without using higher-level powers), they break up the routine much better. With 96 levels and extra modes, players have way more content than they could ever need — or want. Seriously, it drags on.

But the amount of strategy does make Gods vs. Humans a rather interesting pick. Occasionally, you’ll even have to stop champions from making their way to your divine portal — those are few and far between, however. But I feel like, in this review, I’ve only covered a fourth of the tactics involved in an average session.

The floor-crumbling animation is a little slow, which can rob you of precious seconds as you wait for the tower to realign. And I found disappointingly little variation between all the different gods. Despite a different organization of their powers, they all possessed my two or three favorite skills, more or less, and the most basic abilities as well. Even the music is the same throughout and in desperate need of more creativity.

Gods vs. Humans makes it easy to see what you want to see: The help screen is comprehensive, and pausing the action grants access to information on human unit types and god powers, available on easy reference. You can even choose from multiple profiles so you (or a family member) can have more than one save game.

This is a big value for the price, but I wish the developer had put more thought into making the levels and gods feel different from one another. I have my custom strategy down to a such a science, I could topple towers in my sleep.